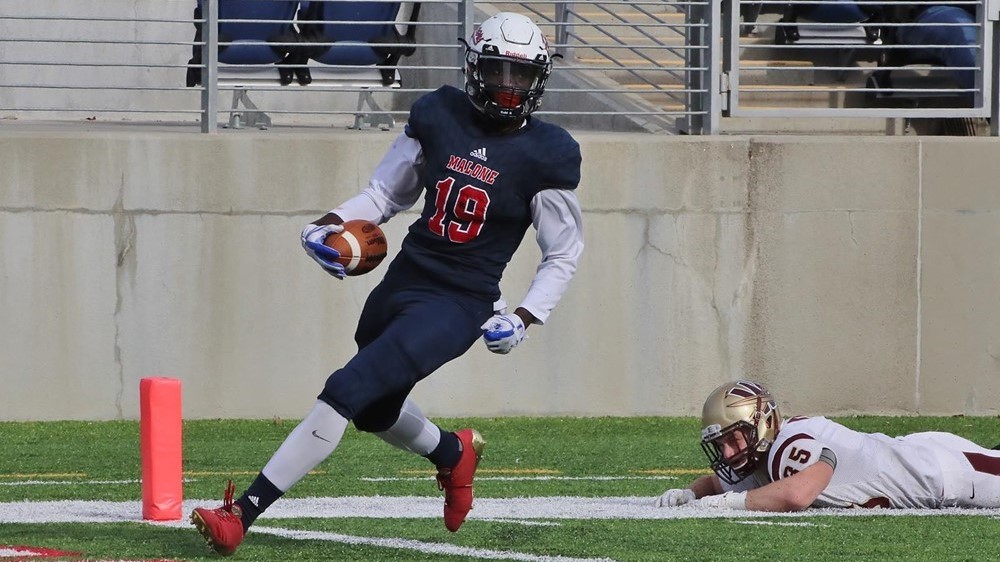 Every year, I love seeing which small school heroes are lucky enough to receive combine invites. This year, that guy is Ashton Dulin. In doing so, Dulin became the first Malone Univeristy football player to ever receive a combine invite.

Allegedly, every NFL team (with the exception of Miami and Cincinnati) sent scouts to watch Marshall’s practices during the season. Only 15 out of 1,321 players with combine invites over the last 4 years, have come from Division II.

Dulin finished his college career as Malone’s career leader in receptions (189), receiving yards (3,188) and all-purpose yards (5,455). During his time as a college athlete, he was also a track sprint star.

His Head Coach recently said, “He played hard all year and he’s done very well in all the practices, the games and the interviews with NFL teams. The NFL scouts, they don’t really tell you a lot, so you don’t know where he’ll end up, but some of them have told me he’s a really hot name right now in the scouting circles. We’re really excited for him.”

For the metric gurus out there, Dulin had a breakout age of 18 and a College Dominator Rating in 2018 of 63.8%! It’s not easy to find a ton of Division II tape, but you can see his highlight tape here:

What makes his story even stranger, after receiving his invite to the combine, Malone announced that they will be terminating their football program for the 2019 season. Ashton Dulin was named Second Team All-American as an all-purpose player by the Don Hansen Football Committee, only to have his Alma Matter’s football program ended.

Do I expect Dulin to be a sure thing? Absolutely not. He’s likely a prospect similar to Krishawn Hogan, Justin Watson, or Tre McBride. However, my curiosity is peeked to see how he performs alongside a higher calibre of players during the combine and if his athleticism impresses.

🆕Kyle Shanahan was about as frustrating as Bill Belichick in 2019 when it came to 49ers running backs. With Matt Breida in Miami, is it Mostert or Coleman? @FFB_Vern dives into the details with RBV.👇

Kyle Shanahan was about as frustrating as Bill Belichick in 2019 when it came to 49ers running backs. With Matt Breida in Miami, is it Mostert or Cole...

I am excited to announce that I am an official ranker for @DynastyNerds! I will be ranking Superflex Dynasty Leagues! If you want to see my rankings, make sure to become part of the #NerdHerd!

Also, a Superflex tab is coming soon to #DynastyGM, so be on the lookout for it!

If you're a #NerdHerd member and haven't upgraded your account to include the #DynastyGM, your free trial will end after tomorrow. If you're on the fence, this is all coming before Week 1: