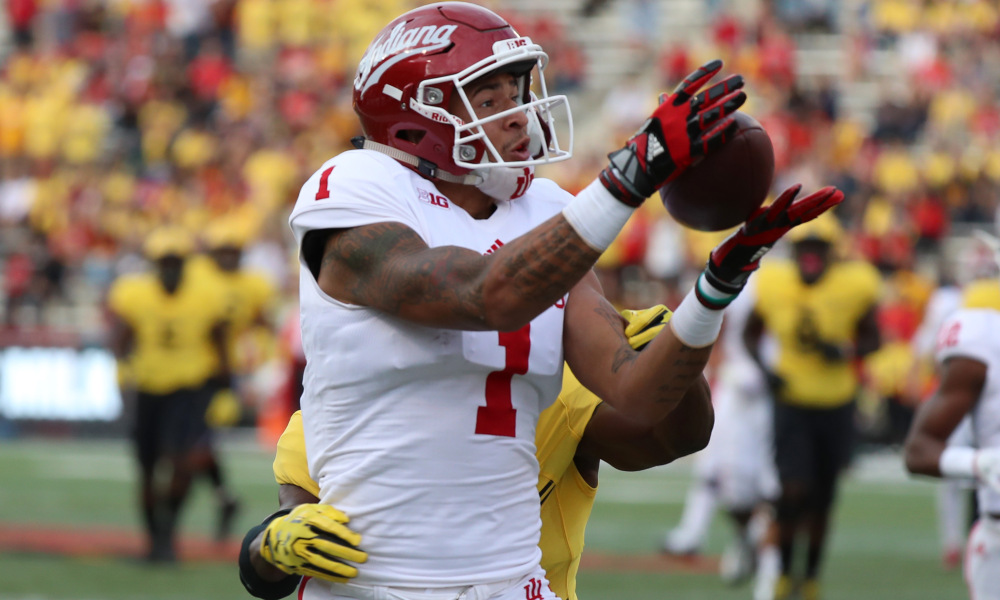 When judging prospects something that is preached a lot are athleticism and intangibles, certain skill sets can be learned but there are certain things people are just born to do. The way Julio Jones ability to elevate, the pure speed of Tyreek Hill, the cannon arm on Aaron Rodgers. Three different positional players with intangibles that just put them into the elite category and are difficult to teach or learn. There are two highly talented wide receivers Christian Kirk out of Texas A&M and Simmie Cobbs Jr. out of Indiana. in football there is a lot that goes into even being a player on the practice squad, not to mention a productive NFL talent. I wanted to look at these two players because I think they could wind up in that big second tier of WR-RB talent that falls somewhere in the 1.08-2.5 range or even later for rookie drafts.

Christian Kirk, 5’11 200lbs. He has been a dynamic playmaker at Texas A&M doing it as a deep threat, chain mover, run after the catch threat, returner. The guy did everything for the Aggies and has a stable base to be successful at the next level. He is a 3-year starter with at least 71 receptions, 919 yards and 7 touchdowns in each of his three seasons for the Aggies. Kirk is the speed side of this equation. He’s quick, agile, runs great routes and can move in the open field. Watching him in an out of breaks is great. He’s got stable hands and would be a great benefit to nearly any NFL team because of his versatility to play in the slot and with his footwork and quickness could do his work outside. I’m looking for him to have a good combine, really look at his speed and quickness numbers when compared to the other prospects but I like him a lot, he’s above average across the board and does everything well. The biggest issue is his height to be a #1 but I like his tape and game speed and believe he could translate to a very serviceable player. Kirk really should have had a better year but his quarterback had issues getting him the ball despite being open. He’s got great feet to beat guys off the line, speed in the open field and is very explosive.

Simmie Cobbs Jr. is a big receiver from Indiana. He is listed at 6’4, 220lbs and just oozes upside if given the opportunity. I especially like his ability to get up and high point the ball over smaller corners. He uses his size very well and could be a big touchdown threat in the red zone no matter where he is drafted. He didn’t play much in his freshman year but produced as a sophomore and senior. He was forced to take a medical redshirt in his junior year when he broke his fibula in the first game of the season. In his senior season he had 72 receptions for 841 yards and 8 touchdowns while it doesn’t jump off the page he had 60 receptions for 1035 yards and 4 touchdowns as a sophomore so that may say something about his overall health this previous season and he may have some improvement ahead a full year after coming back from that broken fibula. When you watch him play there I just can’t look past his swagger on the field. He just looks like he has supreme confidence in himself and his ability to win the 1 on 1 matchups. That’s where he’s going to make his money at the next level is using his big frame and strong hands to beat defenders over the top. I like his ability to separate a while he doesn’t have game-breaking speed can get down the field and make guys miss in the open field quite well. His landing spot is so key because I think he may take some time to develop but has #1 potential if he really works on his game and has a great offseason this year to improve heading into the NFL next year.

Based on the raw numbers and averages the two look very similar. If you weren’t familiar with divisions you may still be wondering which is Kirk and which is Cobbs Jr. There aren’t any major discrepancies between the two until you look into the defenses each went against. Cobbs Jr. on the left showed a tremendous amount of consistency with his numbers across the board is virtually identical no matter who he played. They won’t blow you away but if you told me a receiver was probably going to give me 6 receptions and 70 yards a game that’s a stable piece on any offense. To have that in a guy who’s also tall and can go up for touchdowns despite his modest 8 on the season definitely shows a good balance of consistency and upside especially with his body control on 50/50 balls. Kirk on the right shows the volatility of speedier receiver who has a high ceiling. When looking at his numbers his 3 best games this year were against a non top 50 defences which don’t say a lot more than he really beat up on bad opponents which is great to see but his lower production against top teams is slightly discouraging but when watching him it doesn’t make me question his talent, just widens his range of outcomes. He also averaged almost two more yards per reception then Cobbs Jr. which does make sense given his playmaking ability and agility in the open field. For some guys, they love drafting a guy with an uber high ceiling. That game-breaking talent who can literally win you a week on his own then Kirk is your guy. If you want someone more stable that could potentially be a solid WR2, I think Simmie Cobbs Jr. is the guy to draft. I project them both to land somewhere in the late 1st, early 2nd range of rookie drafts by the time draft season comes around.

It all comes down to what do you prefer, size or speed? Both will be looking to show out in the combine and prove they should be a day 2 selection on draft day. I doubt either will go day 1 but never say never. Both are very solid prospects and I found it interesting how two players who have quite different games could have such similar season-long production. When it comes down to it I think id have to choose speed over size in Kirk. He’s just so talented, has the ability in the open field that I love to see. Both guys have some sweet hands, can run a good route and get open. Cobbs Jr. is great as well and I will likely be targeting both if I can get them, he’s got a swagger on the field that I personally would just love to have on my team.

Dynasty is about having fun and owning guys you love is the best part. So if any of you guys are like me you’ll be targeting both of these guys come draft day if you’re in the bottom half or simply looking to trade into the back of the first like I am. I am definitely going to target these guys I think one or even both could be pushed back and become a good value on draft day because there is so much hype carrying over from running backs of last year’s class. Everyone wants the next stud RB when it’s the WR who will carry your team over the long term.