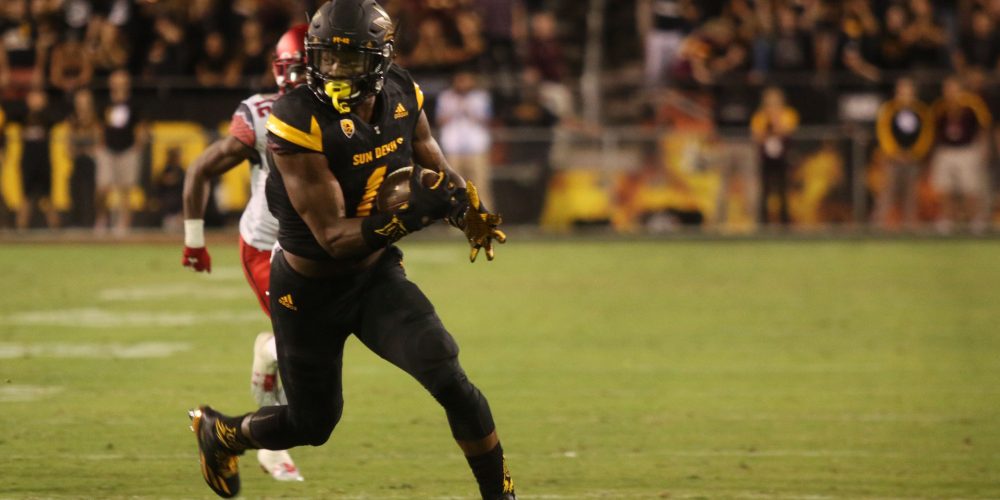 Everyone loves the shiny new toys. Every year as we approach rookie drafts, values soar as owners want to get their hands on new merchandise to spice things up. Countless times I have received offers for picks in the upcoming draft as they get rookie fever. Quite often those offers include future picks in exchange. As such, it’s wise to keep one eye on the future.

For those of you who haven’t drafted your 2018 rookies yet and you’re receiving offers including 2019 picks, or if you’re just looking to sell veterans now for future picks, it might be useful to have a sneak peek for what’s down the road. These are some players that are worth keeping an eye on for next season:

N’Keal Harry has true all-star potential. He has been at Arizona State for 2 years and already the 20-year-old Wide Receiver has flashed his monster potential. Harry had 140 receptions for 1801 yards in his freshman and sophomore seasons combined. A breakdown of his college production can be seen below:

The 6’4” 216 pound wideout is a budding star and one of the best WR prospects we’ve had in years. He has all the physical tools you desire, as well as great route running and catching ability. There’s a strong chance that we see him as the 1.01 in rookie drafts after a few years of below par WR classes.

Montgomery is the early favorite to be the top back in this class. The 5’11” 220 pound back has had a productive start to his career at Iowa, capped off by 1146 yards and 11 rushing TDs in his sophomore season last year (see below):

Not only was he solid between the tackles, pounding away, but he also displayed his proficiency in the passing game, reeling in 36 passes last year for an additional 296 yards. Keep an eye on Montgomery as he looks to be one of the superior backs in the Big 12 next season.

AJ Brown is quite the athlete. The former baseball prospect was drafted in the 16th round of the 2016 MLB draft by the Padres but instead elected to focus on football. Brown had a mediocre Freshman year but exploded in his sophomore seasons. His college production can be viewed below:

The 6’1” 225-pound receiver set Ole Miss’s record for receiving yards in a game in the first matchup in his sophomore season with 233 yards on 8 catches against South Alabama. Mel Kiper has Brown as the first offensive player on his 2019 board and describes him as “long by today’s standards with hands and ability to make plays through contact like Anquan Boldin”.

This is one of the more familiar names as Love was highly touted in the 2018 draft class before deciding to stay at Stanford for one more year. The Heisman finalist rushed for over 2000 yards last season whilst averaging 8.1 YPC (stats can be seen below). As a reference, McCaffrey only averaged 6.7 YPC during his time at Stanford.

There are some doubts out there regarding his size, and concerns over his receiving ability. However, that hasn’t stopped Mel Kiper from ranking him at the top of his RB list for 2019, as well as at the top of Walter Football’s list. Walter Football says, “Love is more on a par with Chris Johnson coming out of East Carolina, except Love isn’t as straight-line fast as Johnson, but possesses more elusiveness and moves in the open field. While Love is extremely fast, he is a tougher running back than one would think given his size. He has excellent balance and is able to pick up yards after contact. Scouts have told me that they rate Love higher than Christian McCaffrey for the ability to run between the tackles in the NFL. Love has great vision that, combined with his speed, makes him deadly. One college director told me, “If the other nine guys do their job for a few seconds, this guy is gone.”

Obviously, it’s far too early to tell how successful anyone will be at this point and rankings are bound to change so much in the next year. But it’s worth getting a gauge of who’s out there. In Part 2 I will highlight the likes of LJ Scott, Damien Harris, Rodney Anderson, and Bryan Edwards.