Tight end is a volatile position, but for those looking for big swings in 2021, these five tight ends have a good path to meaningful targets. 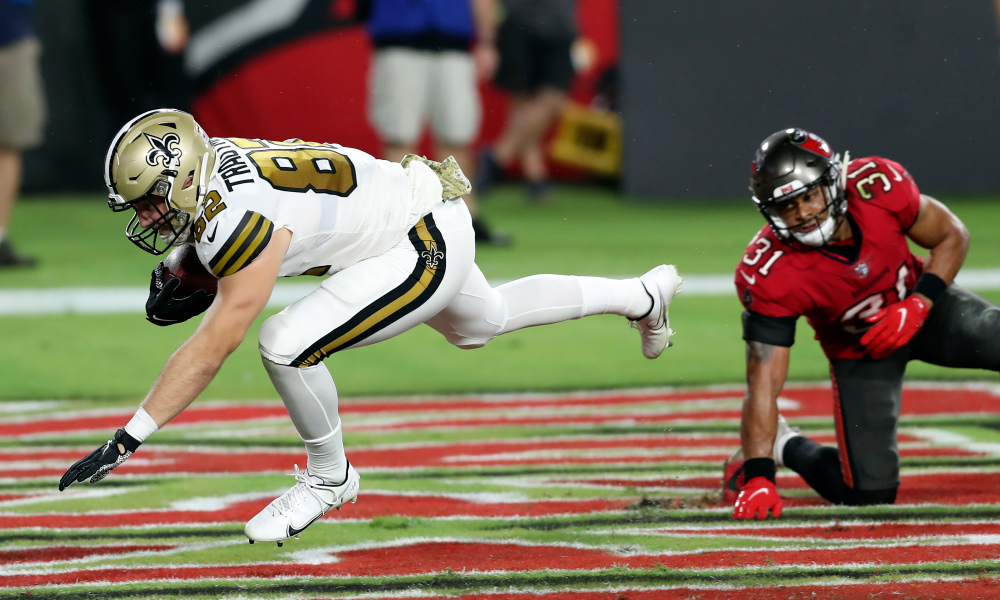 Tight end is a difficult and volatile position. If you have Travis Kelce, George Kittle or Darren Waller, you’re feeling good. If not, you might be cobbling the position together week-to-week based on matchups. If you’re trying to give yourself a leg up heading into 2021, here’s a few tight ends to stash or acquire cheap that have a path to a meaningful role.

Ebron is probably the biggest name on this list, but he’s far from the biggest name on his team. Diontae Johnson, Juju Smith-Schuster and Chase Claypool grab the big headlines, and the Steelers could well add a premier rookie running back in the draft. Quietly, Ebron remains a piece of the passing game puzzle.

In 2020, despite seeing three receivers finish in the Top 25, Ebron had a decent year. He saw 91 targets, catching 56 passes for 558 yards and five TDs. That was good enough to be TE14 for the year. While the Steelers have plenty of other options in the passing game, Ebron doesn’t face competition at tight end as it currently stands. While he might not be an every week TE 1, Ebron is a solid platoon option that has a floor that won’t kill you.

Everett was a free agent signing for Seattle, coming in on a one-year deal for $6 million. Prior to coming to Seattle, Everett played for the Los Angeles Rams, where he served in a tight end platoon with Tyler Higbee. Everett saw 62 targets in 2020, catching 41 for 417 and a TD. That made him TE26 for the year. In four years with the Rams, Everett has caught 127 passes for 1,389 yards and eight TDs.

Even with Dissly still in the mix, Everett steps into a position on Seattle that saw 77 vacated targets from 2020. He has a chance for a meaningful role in a position Russell Wilson has utilized in the past. In 2017, veteran Jimmy Graham was a focal point of the offense, finishing as TE4. He saw 96 targets, catching 57 for 520 and 10 TDs. Since Graham left following the 2017 season, the Seahawks have used a committee at the position. But Everett has a chance to take hold and see enough volume to be a boon to fantasy players.

Firkser might be one of the best under-the-radar guys. This off-season the Titans saw a number of targets head out the door in free agency as wide receiver Corey Davis signed with the New York Jets and tight end Jonnu Smith signed with the New England Patriots. Last year, as the starter at tight end, Smith caught 41 passes for 448 yards and eight TDs on 65 targets. That was good enough to finish as TE9 on the season.

With Smith in New England, Firkser is literally the next man up for the Titans, something he showed he could handle in 2020. Firkser played in 16 games, starting one and saw 53 targets, catching 39 for 387 yards and a TD. That was good enough to be TE32 in 2020. The Titans could add to the position in the draft, but for now Firkser is one of the few returning pass catchers who saw a decent number of targets in 2020. He has a great chance to take a step up in 2021, especially since Smith was a Top 10 option at the position, vacating 65 targets.

This one might fall under wishful thinking, but Herdon has shown flashes before. As a rookie in 2018, Herndon saw 56 targets, catching 39 for 502 yards and four TDs. That was good enough to be TE15. But suspension and an injury limited him to just two targets and one reception for seven yards in his sophomore season.

By contrast, Herndon was more a part of the Jets’ attack than you remember in 2020. The problem is the team and its offense wasn’t very good. Still, Herndon appeared in 16 games, starting 13. He saw 45 targets, catching 31 for 287 yards and three TDs. That was good enough to be TE34 in 2020. His target share and receptions weren’t far off his rookie season production, nor were the touchdown numbers. But his yardage was low, perhaps a product of a stagnant offense.

The Jets are changing coaches—and schemes—yet again. This will be the third head coach in Herndon’s four seasons. Can he recapture the magic of his rookie season? If he can, Herndon could provide sneaky value for those willing to wait out the past two seasons, or those who acquire him for a bargain this off-season.

Trautman was a top rookie pick in and underwhelming 2020 tight end class. Part of the appeal was his landing in New Orleans with Drew Brees. Now, Brees is gone and Trautman didn’t produce a lot as a rookie. He played in 15 games, starting six, and saw just 16 targets. But Trautman caught 15 of those targets for 171 yards and a touchdown.

The opportunity here is in the competition he no longer faces. In 2020, Trautman was behind veteran Jared Cook. Cook saw 60 targets, catching 37 for 502 yards and seven TDs. He’s in Los Angeles with the Chargers now. Cook was TE 12 in 2020. In addition, Trautman fought for snaps with Taysom Hill and Josh Hill. With Taysom competing at quarterback and Josh off the roster, that frees up more opportunities.

The Saints did make a move, signing free agent Nick Vannett. Vannett has been with Seattle, Pittsburgh and, most recently, the Denver Broncos. Vannett signed a two-year deal with Denver last off-season and saw 21 targets in 2020, catching 14 passes for 95 yards and a touchdown. The Broncos released him earlier in the off-season. While Vannett is a veteran who brings competition, in five years in the NFL he’s only seen more than 30 targets once, seeing 43 in 2018 and turning that into 29 receptions for 287 yards and three TDs.

Trautman didn’t see a lot of targets in 2020 but he maximized the targets he received. With Cook gone, he should take a big step forward in 2021. He’s a prime option to target with owners who lost faith after his rookie season or dropped him to waivers.

Landing Spot Lottery: Will this be good for fantasy production?
2021 1-QB Mock Draft Version 6.0 Round 3