Stock Watch: Revisiting the Class of 2019, Running Back Edition

Revisiting the Class of 2019, this time we look at the value of a quartet of running backs drafted in the third round as they head into year two. 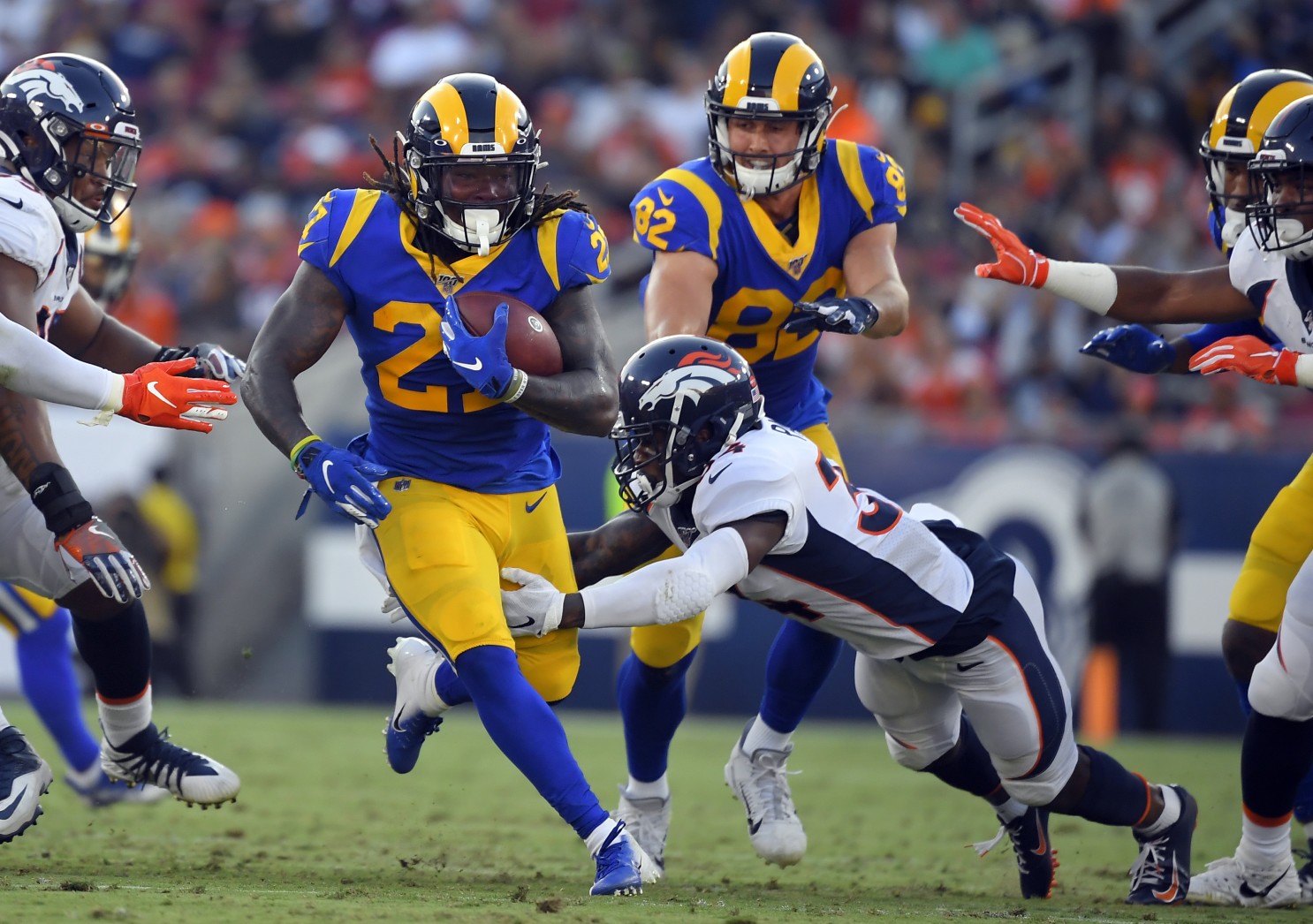 This won’t be a tour of the stars from last year. By now, you should know players like Kyler Murray, Josh Jacobs, Miles Sanders, Terry McLaurin, A.J. Brown, T.J. Hockenson, and Noah Fant are assets you should jump on. This will look at others who may not have performed as expected or yet gotten a chance, which could be a value heading into 2020.

Without further ado, let’s continue our stock watch with running backs. Today I’ll be looking at a quartet taken in the third round, and how they stack up heading into 2020.

Henderson was the highest of these four in terms of draft position in 2019 and quickly found himself moving into the first round of rookie drafts. The talented prospect out of Memphis seemed to be going to a good situation. Todd Gurley had questions about his knee, and it seemed like Henderson would have a chance to contribute. Instead, Gurley played the whole season, and Malcolm Brown was the next man up in the early going. Henderson played in 13 games but got just 39 carries for 147 yards and no TDs, catching four passes for 37 yards on six targets. It wasn’t the kind of return and explosion many had hoped for, but those who took him as a handcuff to Gurley probably didn’t mind.

Gurley moved on to Atlanta this off-season, so it soon seemed like Henderson might be ascending. Then the NFL Draft happened, and the Rams snagged Florida State running back Cam Akers in the second round. And suddenly, it seemed like Henderson was the forgotten man again—at least when it came to drafts. Akers is a talented rookie, and he’s being taken decently high in drafts. He’s going as in RB27 in PPR and RB24Standard, meaning people are expecting (or hoping) for around an RB2 return. But what about Henderson?

The second-year running back, who already has a familiarity with the offense, is much more of a draft bargain. He’s currently going as RB44 in PPR and RB45 in Standard, a significant drop-off. And yet, many think he’s going to end up at least splitting the work and may have an early-season edge on Akers, who must adjust to the NFL and learn the Rams’ playbook without the advantage of a typical NFL off-season.

The Rams spent decent draft capital on Henderson in 2019, and I don’t think they’ve forgotten he exists. A slow rookie season and a shiny new toy seem to have relegated him to the out-of-sight, out-of-mind range for most fantasy players. Therein lies your advantage. I’ve taken Henderson in a few drafts at a discount and have acquired him cheaper as well. I think he can have a role in this Rams offense and will lead the backfield this year. Even if it ends up being a split, Henderson’s price makes him a better value.

Fantasy football is about opportunity paired with talent, and for that reason, Montgomery was a hot name in 2019 rookie drafts. He was one of a big three going early for those that needed a running back. While Josh Jacobs and Miles Sanders largely delivered, and are hot commodities heading into year two, Montgomery went the way of his team’s offense—a disappointment. But is that fair?

It’s not like Montgomery disappeared. He played in all 16 games, starting eight, and amassed 889 yards and six touchdowns, catching 25 passes for 185 yards and another touchdown. Those are pretty good numbers for any running back, let alone a rookie. It just seemed like Bears didn’t always know what to do with him, and he didn’t reach the lofty heights some expected. His 3.7 yards per carry didn’t help, nor did the fact he ceded most of the passing work to Tarik Cohen, limiting his value in PPR.

The same questions about the Bears’ offense exist, but the team didn’t change the status quo at running back. During the 2019 season the team sent Mike Davis packing, which made it clear that Montgomery and Cohen will be the guys there. And while Cohen again figures to be the passing weapon, Montgomery should get the lion’s share of the rushing work. In 2019, that was good enough to have him finish as RB22 in standard and RB24 in PPR. Solid numbers that could go up in 2020 if the Bears’ offense is more efficient. While he doesn’t present the upside of Jacobs or Sanders, he should be a solid RB2 option.

Montgomery is going as RB25 in PPR and RB21 in Standard. That makes sense, given his role in the offense and rookie production. He doesn’t have competition for touches when it comes to running in the trenches, and he had a better rookie year than some might remember. The problem is people that drafted him ahead of Sanders and/or Jacobs last year, hoping to snag an RB1. He likely won’t be that in Chicago, at least not if Cohen remains in the mix. If you’re taking him for what he is, I like his current value, especially if you’re one who waits until later in drafts to snag running backs.

Singletary was taken one pick behind Montgomery, and many liked his landing spot in Buffalo. It took a while for him to get going, and he was often splitting time with Frank Gore as a rookie. Still, Singletary had a fine season for the playoff-bound Bills. Singletary finished with 775 yards and two TDs rushing, adding 29 receptions for 194 yards and two TDs. He was limited to 12 games, eight starts, thanks to injury, but turned in a solid rookie year, especially for a back that wasn’t going in the first round of most rookie drafts.

Singletary appeared to gain traction near the end of the season, easily overtaking Gore. This off-season Gore moved on to the Jets, and it looked like Singletary’s stock was rising. But, like Henderson, he gained competition as the Bills drafted Zach Moss in the third round. So, it’s likely Singletary will again share the backfield, this time with Moss, who figures to be more of a banger and possible goal-line back. Also, all Bills runners must contend with quarterback Josh Allen, a weapon in the running game. Allen had 510 yards and nine TDs as a runner in 2019 and figures to be a goal-line threat. Singletary figures to be the best receiving option in the backfield, but Buffalo isn’t an incredibly high-volume passing offense, and they also added receiver Stefon Diggs this off-season.

I like Singletary as a player and a talent, but I’d like him better at an RB3 value. Moss will get work, and Allen seems to be the team’s best goal-line back. That limits the opportunities for Singletary to get into the end zone, seemingly capping his ceiling lower than a back like Montgomery. Yet you’re not getting much of a draft discount. There are those who think he’s going to dominate, so you might be able to sell him high. I’d rather take that tactic than invest heavily in a back with limited receiving and touchdown upside in a team that figures to focus on playing defense and being efficient.

Mattison was taken with the final pick in the third round of the 2019 draft and didn’t figure to make a huge impact because he was behind Dalvin Cook. Mattison did look like a solid handcuff, especially for a player prone to missing time. He had a solid season, coming in to spell Cook, and in mop-up situations, he played the first 13 games and had 462 yards and a TD, averaging 4.6 yards per carry on 100 carries. The problem came with Mattison getting injured and being unavailable by the time Cook missed games to close the regular season. Instead, Mike Boone got the start in the last two games, adding 273 yards and three TDs for the season.

Not much has changed for Mattison if everyone is there. Cook is still a Viking and figures to be the starter and workhorse. Mattison proved he can be a solid complement and has upside if Cook is out. And that role as a sub and handcuff would somewhat align with his ADP for 2020, where he’s going as RB43 in PPR and RB46 in Standard. He’s one of the best handcuff candidates in the NFL, but this year that might take on more importance. Cook is currently threatening a holdout, which could vault Mattison up the list if extended into the regular season. He looked strong in a supporting role in 2020 but didn’t get a chance to get featured by the time Cook missed time, so there remains a question about whether he’d get the full workload. Boone is still with the Vikings, and it’s possible both he and Mattison share the load if Cook misses time. Still, either way, it presents an intriguing proposition that gives Mattison a bit more intrigue and value heading into 2020.

At his price point, if I own Cook, I am making sure I have Mattison. If I have Mattison, I might also look to see if I can make a good deal with the Cook owner because, for the 2020 season, his value might be as high right now as it’s going to be. You could hold him and hope Cook misses time, and he gets a shot, but that’s a risky play. He seems like a decent back, but we have no evidence he can carry the full load or get that chance in Minnesota. Cook is a young back going into a contract year, but the Vikings seem to be interested in keeping him long term. If that happens, Mattison will likely never be more than a change-of-pace or backup in Minnesota.

You can find more from Matthew Fox on Twitter @knighthawk7734 or as co-host of the Fantasy Football Roundtable Podcast, part of the Drive In Podcast Network.