As the Stock Watch moves to tight end, we look at four players who might have a path to targets and starts on their respective teams. 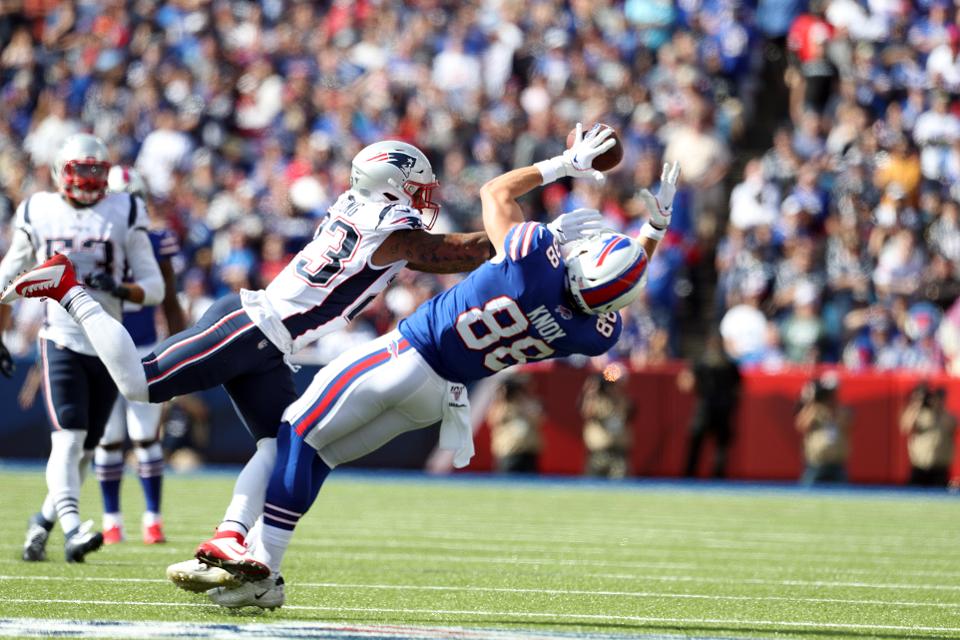 This won’t be a tour of the stars from last year. By now, you should know players like Kyler Murray, Josh Jacobs, Miles Sanders, Terry McLaurin, A.J. Brown, T.J. Hockenson, and Noah Fant are assets you should jump on. This will be a look at others who may not have performed as expected or yet gotten a chance, that could be a value heading into 2020.

Our Stock Watch concludes with a look at tight ends. There were a number of prospects taken last year in what was considered a tight end rich draft. And while Fant, Hockenson and Irv Smith, Jr., seem to have roles and values set, there’s another group of tight ends worth watching. Let’s look at a quartet of second and third-round picks heading into year two.

Sample was the fourth tight end off the board in the 2019 draft, taken two picks after Smith and one pick ahead of Miles Sanders. He went to the Bengals, a team that could seemingly use young weapons. But he wasn’t a factor in his rookie season. Sample played in nine games, starting two, but caught just five passes for 30 yards on six targets. It wasn’t much production in year one, and you’d be forgiven if you forgot about him heading into year two. The Bengals weren’t great in 2019, to say the least, earning the No. 1 overall pick in this year’s draft. The team used four different tight ends in 2019, but the primary players were Tyler Eifert and C.J. Uzomah. Eifert caught 43 passes for 436 yards and three TDs, staying healthy for 16 games, while Uzomah had 27 receptions for 242 yards and two TDs.

Eifert is gone, having moved on to Jacksonville on a free-agent contract. So Uzomah figures still to be the starter and top player at the position, but is there an opportunity for Sample? Cethan Carter is still in the fold, and he appeared in 15 games for the Bengals in 2019. He figures to be more of a blocker and Special Teams player, though, as he had just three targets and two receptions for 13 yards and a TD in 2019. Sample was a second round pick, one who produced 46 receptions for 487 yards and five TDs with Washington.

The Bengals have weapons in the backfield with Joe Mixon and Giovanni Bernard, and a receiving corps that includes A.J. Green, Tee Higgins, Tyler Boyd, John Ross and Auden Tate. Clearly tight end wasn’t a huge part of the attack in 2019, but Eifert does vacate 63 targets and 43 receptions from 2019. Some could go to receivers, and Uzomah could see an uptick, but the Bengals typically incorporate a few guys at the position, and Sample was efficient when targeted in 2019. The best thing is, Sample is free. He’s currently not even registering on ADP because most people probably forgot he was there.

Sample it a stash at best, but he was a decently high pick that costs nothing to acquire. If I am in a deep league or have a Taxi Squad that can hold more than rookie players, he’s a guy I’d be happy to pick up and stash. At this point, he has a potentially easier path to targets than some other players, especially if there is an injury at the position.

Oliver was the fifth TE off the board, going to the Jaguars with the fifth pick in the third round. That created some expectations that he could be a part of their plans. Oliver got into four games, starting one, and had three receptions for 15 yards on six targets. The Jaguars used seven different tight ends in 2019, with five (James O’Shaughnessy, Geoff Swaim, Seth Devalve, Nick O’Leary, and Oliver) earning starts. But no TE had more than 20 targets, with O’Shaughnessy leading with 14 receptions for 153 yards and two TDs. Swaim caught 13 for 65 yards, while Devalve had 12 receptions for 140 yards. So, the tight end wasn’t a consistent position, or a consistent value for the Jaguars in 2019.

There is more clarity at the position now, but also possibly less opportunity for Oliver. The Jaguars signed Eifert from the Bengals (stats referenced above), who figures to be the top option. While Swaim, Devalve, and O’Leary are gone, the team still has O’Shaughnessy, too, meaning Oliver is second or third on the depth chart heading into the season. As expected, he’s not being drafted at the point, meaning you can probably find him on your waiver wire.

Much like with Sample, Oliver probably isn’t a player you’re taking assuming you’re going to play him in 2020. He’s probably still buried a bit on the depth chart, especially with the team sinking some free agent money into Eifert. But Eifert has struggled to stay healthy, and Oliver was a decently high pick. If you can stash him on the bench or a Taxi Squad, I think some opportunity might still be there.

Sternberger was a trendy pick in 2019 rookie drafts. People liked his talent coming out of Texas A&M, where he had 48 receptions for 832 yards and 10 TDs in his final year of college. And he seemed to have some great opportunity coming to the Packers, despite the presence of veteran Jimmy Graham. That didn’t really materialize in year one, as Sternberger ended up on IR and failed to grab a single reception in the regular season. He did appear in the post-season, catching three passes for 15 yards, including two receptions and a touchdown in the NFC Championship Game against the 49ers. Meanwhile, Graham led the Packers with 38 receptions for 447 yards and three TDs, while veteran Marcedes Lewis caught 15 passes for 156 yards and a TD.

Sternberger didn’t get to show much on the field in 2019, but he has a huge opportunity coming into 2020, which could indicate how the Packers feel about him. Graham moved on to the Bears in the off-season. While the Packers re-signed the veteran Lewis and drafted Josiah Deguara in the third round of the draft, Sternberger seems to be the favorite to step into a meaningful starting role. Graham was third on the team in targets in 2019, behind receiver Davante Adams and running back Aaron Jones.

The Packers notably didn’t add much in terms of weapons in the receiving game in the draft, or through free agency, so the starting tight end position figures to have value, despite a potentially low-volume pass offense. And drafters are high on Sternberger, as his ADP is currently TE26 in PPR and TE30 in Standard. That has him sitting just outside the TE2 range. Last year, Graham was TE21 in PPR, so if Sternberger gets that role, and that volume, he’s right in line with his ADP.

I took Sternberger in a couple of places late in rookie drafts last year, so I’m hopeful we see a good jump up in 2020. That being said, he’s still a bit of a mystery. He had a great 2018 at Texas A&M, but that was his only big year in college. And we didn’t see him do anything in 2019 for the Packers. It’s also possible that Lewis plays a more significant role, and Sternberger is slow to come on in 2020. So, if I have him, I’m cashing in on hype or hoping that he lives up to it. But I am wary of buying him at his current price.

Knox was taken near the end of the third round. Of all the tight ends on this list, he had the best showing in 2019. With a playoff-bound Bills team, Knox ended up playing in 15 games, starting 11 and catching 28 passes for 388 yards and two TDs on 50 targets. While the team has higher cost veterans in Tyler Kroft and Lee Smith, it was Knox that led the way at TE. Kroft was injured to start the season, but managed just six receptions for 71 yards and a TD in 11 games, while Smith had four receptions for 31 yards and a TD. Knox seemed to be settling into the top TE role for the Bills and seemed to have a decent rapport with quarterback Josh Allen, creating excitement heading into year two.

Kroft and Smith are still on the roster, but Knox seems to be the favorite to start and be the biggest target at tight end. The question is, how much volume will he see? The Bills aren’t a high-volume pass offense, and they have returning receivers John Brown and Cole Beasley while adding star receiver Stefon Diggs in the off-season. They also have a decent receiving back option in second-year player Devin Singletary. Knox was third on the team in targets in 2019 but could well end up being a fourth or fifth option in the passing game in 2020. And that’s combined with the fact the Bills figure to be still a run-first team that plays good defense to keep games close. That potentially limits Knox’s ceiling, which is reflected in his ADP. He’s currently going as TE28 in PPR and TE29 in Standard, a bit back of Sternberger.

I still like Knox as a stash, especially in places where I’ve snagged him late. He was a late rookie pick in 2019 (or a waiver wire grab) who ended up having value. Still, he only had four games where he caught three or more passes. That is reasonable cause for concern. Despite holding the job as the starter in 2019, and being third on his team in targets, Knox was just TE32 in PPR. He figures to have more competition for targets in 2020, and at his ADP he may not return value. I like his potential, and I think he’s got a great path to locking down that job in Buffalo, but the week-to-week fantasy value simply isn’t there. He’s a TE3 with possible upside, but you might be able to get more than that if you find an eager buyer.

For more from Matthew Fox, follow him on Twitter @knighthawk7734 or catch him as co-host of the Fantasy Football Roundtable Podcast, part of the Drive In Podcast Network, at www.musiccitydrivein.com.