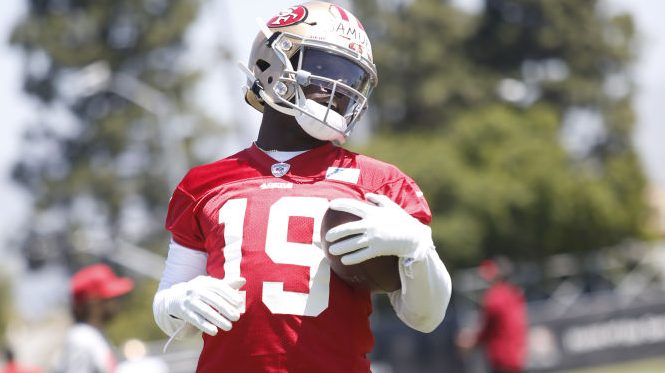 Year 4 of the Superscore project is here already.  I don’t think there is any other way to start this article than by pouring one out for Hakeem Butler.  The pre-draft buzz on this guy reached levels that I’ve never seen, and during my pre-draft projections he was coming out as one of the best prospects my model had ever seen.  Ultimately, NFL evaluators saw something that many twitter film grinders were unable to see, resulting in him not being one of the first WRs off the board (many people had butler being a first-rounder), and falling all the way to the first pick in the fourth round.  This makes Hakeem ineligible for the Superscore analysis of 2019 Rookies.  Last year’s target was Anthony Miller, and although his rookie campaign did not live up to the high bar set by MT and JuJu (the 2016 and 2017 candidates), it was far from a disappointment.  Reflecting on Miller, he was able to lead his team in receiving touchdowns (7), while being targeted 5th most on the team (54).  Miller was also dealing with a shoulder injury the majority of the year.  I am excited to see his progression continue in the league.  Chicago is far from an ideal situation for a receiver to break out, with shaky QB play and capable pass catchers lining up at every position.

The 2019 WR Rookie Class was unique as there were players of all shapes and sizes and skillsets to choose from.  9 WRs were selected in Rounds 1 and 2, and many of those players found themselves in very favorable fantasy situations.  Our candidate for this year has also found himself in a rather favorable fantasy situation.  Deebo Samuel in San Francisco has a realistic shot at getting starter snaps as early as week 1!

Right now Deebo is going around the end of the first in Dynasty rookie drafts and a later first is where value has been found on studs like MT and JuJu.  His athletic profile resembles DJ Moore, but toned-down a little bit across all categories.  Samuel has a compact frame and he looks like a running back with the ball in his hands.  His Youtube highlight reels are filled with one-handed touchdowns and kick return TDs.

Deebo’s athletic profile, hand size, and draft stock all bode well for his future success in the league, and the landing spot is the icing on the cake.  The 49ers have a relatively thin WR corps, leaving Samuel a clear path to the top of this team’s depth chart.  So go out and add him to your squad!

I hope you enjoyed a primer to Superscore, as well as some model validation and hints for future breakout players.  If you have any questions, please reach out to me on Twitter @rosecitypeach. If you haven’t already, go join the #NerdHerd for just $2.99 per month. Get extra podcasts, consensus staff rankings, buy/sell tool and more.

Which Teams Could have RB Success?
Running Back Volume Score
25% Off Sitewide - Use Coupon Code "Black-Friday".