Who will be the TE1 for the LA Rams in 2020?
Will Higbee repeat his late-season dominance, or was his ascension just a mirage?
@ekballer’s finding it all out in Everett v Higbee: LAR TE1 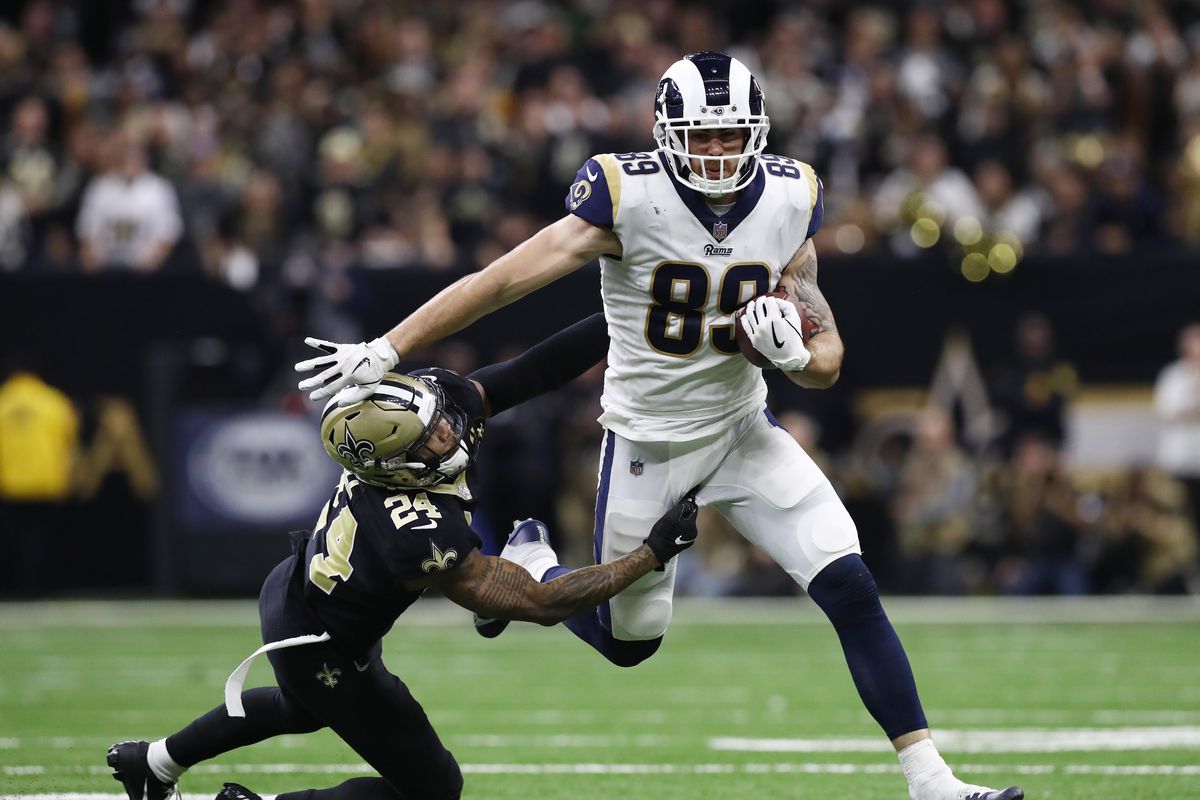 Early on in the 2019 season, it was clear that the Rams offense had changed. Gurley was pulled on the goal line for Malcolm Brown; Brandin Cooks barely graced the box score; and, to the excitement of fantasy managers, Gerald Everett was seeing meaningful targets, delivering on long-overdue hype.

The Rams, it seemed, had a startable TE for  fantasy.

In the middle of the season, Everett got dinged up (a knee injury). Tyler Higbee, who had always shared snaps with Everett, picked up the slack in the passing game. And then, in week 13, he grabbed the job with both hands and ran away with it, averaging 104.4 yards and 21.4 PPR points over a historic five-game stretch to close the season.

Everett returned to duty during the last few games of the year but saw only a tiny snap share. Was Everett not yet at full strength? Or has Higbee full-on wally-pipped his teammate?

Who will be the Rams TE1 for 2020? Let’s figure it out! First let’s look at who these players were as NFL prospects.

At 6’6″ 249lbs Higbee has a fairly prototypical TE size/weight profile. PlayerProfiler lists him with an average speed score and no other athletic metrics (he likely didn’t test in those drills at the combine).

He started his college career as a WR but converted to TE his sophomore year. Higbee’s utilization in the passing game increased every season, culminating in a 38/563/8 senior year (2015)

He posted a good YPR of 14.8 and a decent college dominator at 20.8%.  It’s said that he fell in the draft due to off-field issues (a criminal complaint with racial overtones) and was taken by the Rams in the fourth.

Everett played one season at UAB and two at Southern Alabama, all as a TE. His final year he posted a 49/717/4 line; the year before he scored 12 TDs, 4 of them on the ground, proving himself a versatile weapon.

Let’s take a look at some utilization data.  Who played more? Who did more with the snaps?

Some trends are immediately evident.  Higbee out-snapped Everett in terms of raw snaps, snaps/game, and snap %.  He was on the field more consistently, even discounting the games Everett missed to injury.

Target/utilization numbers for the two players are similar, though Everett was slightly more likely to receive a target on any given snap (by .6%). But Higbee vastly outproduced Everett in terms of fantasy points, and he scored about 15% more points per snap. He did more with his opportunities.

Let’s take a look at another data set.  This one is a little different, combining some opportunity and production metrics.

As analysts, we like seeing opportunity. Opportunity translates into production; opportunity means the team thinks the player will succeed. Higbee saw tons of opportunity, posting a top-8 target number amongst TEs. But also note that his air yards market share and his target share weren’t vastly higher than Everett’s- so the team also values Everett.

The biggest difference from this data set is Higbee’s efficiency- his RACR (rate of converting air yards) is 47% higher than Everett’s. It’s so high for two reasons: he catches everything, and he has massive YAC ability. Higbee had nearly 400 yards after contact, the 4th best number amongst TEs.

These numbers were enough to make Higbee the #8 TE on the year, and the #1 TE over the last five weeks of the season.  Everett finished the season at TE25 playing two fewer games.

There’s more good news here for Higbee. His target rate of 14.9% jumped to 26.3% in the red zone, and his 11 RZ catches to lead all TEs. We love this; Higbee is getting high-value targets, and he’s getting a lot of them.

While his 77 targets ranked 9th for TEs:  56 of those came in the last 5 weeks of the season, showing a definite upward trend in usage.  “On-pace” stats are often misleading… but… he was on-pace for over 150 targets through those last five games.

So while Everett is about average in terms of efficiency, Higbee posted elite numbers.

One final nugget from the efficiency stats- one would expect Everett, the superior athlete, to create more separation. But the data doesn’t show this; Higbee has slightly more separation per target at 1.36 yards to 1.17 for Everett.

At this point, we know Everett’s the better athlete, but that Higbee’s been the more efficient receiver and the better player with the ball in his hands.  Still, I have some big questions about the usage trends.

Did Higbee’s ascension only correspond with Everett’s recovery time?  Or had he in fact supplanted Everett in the gameplan?  Only McVay and the team doctors might know these answers for sure, but we can look at the facts we have for some hints.

First, Everett’s injury:  it was a knee hyperextension, which usually heals in 2-4 weeks with rest.

The injury occurred in week 12.  So it is in fact plausible that Everett’s lack of usage was due to the injury rather than the result of a game plan, though he would have been expected to be at full strength by week 17.

But I’m not so sure.

Let’s take a look at a few charts I prepared to show utilization trends for the two players.

As stated, Everett’s injury occurred in week 12. It seems that the usage for the two players was changing before the injury- Everett’s highest snap counts of the season came in the first five weeks, whereas Higbee’s began to rise around week 4. Still, Everett saw a whopping 12 targets as late as week 10. So it’s not as though he had been phased out of the passing game.

It does seem that Higbee’s superior efficiency is part of the story, but the injury was likely a factor. Still, Everett should have been fully healthy for week 17, and he played only a handful of snaps.

Film review quickly shows how we get those numbers for Higbee. He’s explosive on screens, eating up yards on bump n runs and dump-offs. He breaks tackles to extend his runs. He shows quick hands, grabbing balls even when poorly placed. He makes nice grabs in traffic. This dude is a baller.

Everett makes some nice contested catches as well, but I also saw him make a lot of mistakes. I saw him catch the same 5-yard quick out that Higbee takes for ten yards and cut immediately out of bounds (7 minutes on the clock). I saw him catch another quick pass on the boundary- and make a solid effort to churn out some extra yards- but and fail to get out of bounds with less than a minute remaining

He’s fast, and he’s good at the catch point, but he doesn’t seem to have the same football instincts that Higbee shows; Higbee seems better at leveraging his blockers and finding the holes in zone. Everett does display good contact balance on some plays- though not on others- and he definitely forces some misses.

What To Expect Next Year?

Ultimately, Higbee performed too well to go away. I expect him to be a bigger part of the game plan for 2020 than he was to start in 2019. But I would expect that, barring a trade, Everett will also factor into the plan. He’s a 2nd round pick- a McVay selection- and he has also played pretty well.

Last year, the Rams played in 12 personnel only about 14% of the time (and they almost always threw the ball from this formation).  I’d expect the remaining snaps to be shared, with Higbee seeing the greater portion. He’s always been the better blocker and now he’s shown superior ability as a receiver as well.

A 60/40 split in favor of Higbee makes sense.  If they play a similar amount of 12-personnel, this would leave Higbee playing around 70% of snaps to Everett’s 50%

If that’s the case- and both players maintain their current efficiency numbers and target %-  and play the same amount of games (lots of if’s here!)- Higbee should exceed his TE8 finish, but only by a small amount (about 180 PPR puts him at the TE7 for 2019). His range of healthy outcomes is 160-200 points.

Everett would likely wind up with a year’s end production similar to his 2019 finish.  If we give him a full healthy season he would finish with about 110 PPR, which would be enough to finish as the TE18 (right where Evan Engram finished the 2019 season, a few points behind Jack Doyle).  So still a startable asset in 2TE leagues or in TE premium, but only a bench stash in more traditional dynasty leagues.

Thanks for reading, hope this was helpful, and may the fantasy gods smile on your teams!

Hail To The Chief: Washington Hires Ron Rivera
Next Man Up: Endgame