Of all the big name prospects in this year’s class Thaddeus Moss has shown the least on film. @ReflipeWThenuz breaks down the player and his prospects. 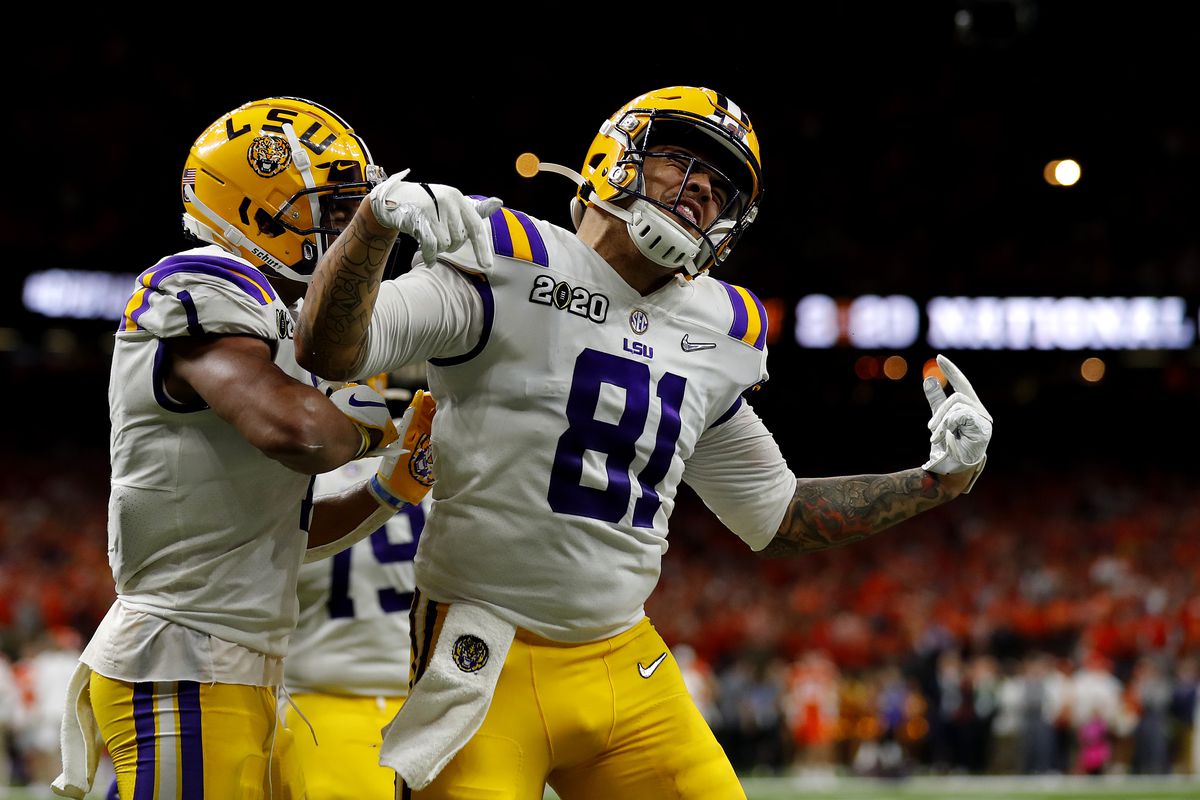 Thaddeus Moss is quite possibly the most overrated player in the 2020 draft class. Now don’t get me wrong, Moss has flashed some upside in his limited playing time but that’s just the issue, it has been an extremely small sample size for the son of the Hall of Fame legend Randy Moss. You can see from his statistics below that due to injury and transfer rules Moss only played one single solitary season of any merit. During that one season, Moss set LSU records for both catches and yards by a TE.

As you can tell from his stats above, Thaddeus Moss began his college career at North Carolina State University. He came to the Wolfpack as a top 10 TE recruit out of Mallard Creek High School in North Carolina. As a true freshman, he managed to get on the field in 7 games starting 3 of them. His usage was not what he expected and he chose to follow the OC (Matt Canada) who had initially recruited him to NC State out of town to LSU.

Due to rules governing NCAA transfers, Moss was forced to sit out a season upon announcing his decision to transfer. This was not a huge issue as the TE underwent shoulder surgery and the season off allowed him to rehab and get back to full strength. During his lone season on the bayou Moss underwent a relatively quiet run before enjoying the best two games of his college career during the college football playoff. During the semi-final, Moss put up the best yardage game of his college career while in the Championship he threw down his only multi-score game. Between these two national spotlight games and his famous name, Moss came to the attention of the nation. Without further ado let us take a look at the film and dissect his game.

One of the biggest strengths I find in Moss’s game are his hands. The son of the Hall of Famer has got a nice set of mitts on him. In the limited time he spent on a college field he managed to snag just about every pass that was thrown his way. You can see an example of his reliable hands below.

While not the fleetest afoot, Moss does show excellent toughness after getting the ball in his hands. He runs the way he blocks, with a chip on his shoulder. Despite his limited opportunity in college, he showed the type of fight and effort you want from the position. His now-famous play from the National Championship highlights his determination as a player.

It might not sound like the sexy thing to say but the biggest strength Thaddeus Moss brings to the table is his blocking. Moss is a capable and accomplished blocker. He routinely uses his leverage as a shorter TE and succeeds at the point of attack. Moss was used as both a traditional TE and an H-Back in his capacity as a blocker. You can see examples of both formations below with the first one from the TE spot and the second one from the backfield/H-Back position.

Despite the famous father and big plays in the biggest of games, Moss’s game leaves many questions unanswered. When you watch Moss you certainly do not see a huge speed component to his game. He will never be mistaken for a Mike Gesicki or Noah Fant athletically. While it may not be his fault he also showed a limited route tree during his time at LSU. This could simply be a scheme component and not a terrible indictment on the player himself.

Quite possibly the biggest red flag against Moss will be his health. It was revealed at the combine that Thaddeus had a fracture in his right foot which will require surgery. Moss also suffered a couple of other injuries in college most notably the one mentioned before which cost him the 2018 season following multiple surgeries to fix fractures in his left foot. Foot issues can certainly be a problem for bigger athletes like tight ends. This will be a situation that will likely cause him to fall a little bit in the upcoming NFL draft.

Reviewing what I have seen from Thaddeus Moss, I feel like I have been harsh on him. He is a fine player that I would be happy to have on my NFL team. After all, who doesn’t like the TE that is willing to mix it up and open up running lanes for others and lays the wood in the pass protection game as well? However, this is dynasty fantasy football we are discussing. I am simply not sure that Moss offers enough upside from a numbers perspective to elicit your attention in your upcoming drafts. Draft him with caution and hope for the best. Players have certainly come out of nowhere to put up successful fantasy careers. However, with the limited sample size he has given us, I simply cannot recommend drafting him before the fourth round of your coming drafts.