The Argument for Buying Carlos Hyde in Dynasty 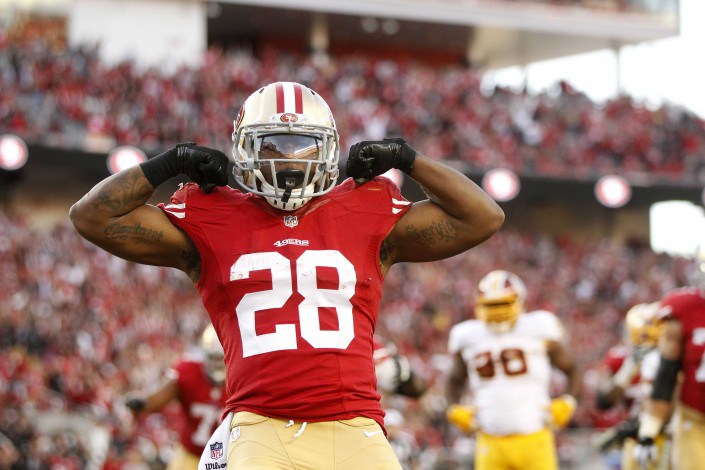 About a month ago, I was the guy telling you to sell your shares of Carlos Hyde in dynasty before the NFL Draft. My primary reason for this advice was because of the fact that Cleveland was rumored to be in the running to select Saquon Barkley with one of their top five picks in the NFL Draft. Fortunately for Hyde, they did not. However, they did select Nick Chubb with the 35th overall pick early in the second round. With this draft capital being spent on an exciting rookie, the dynasty community as a whole is down on Carlos Hyde, but I’m here to tell you that you should be buying Hyde rather than selling him. He’s one of my favorite buy-low candidates this off-season. Offer an early to mid second round pick for Hyde and reap the benefits for the next 2-3 years.

Seemingly undervalued, Carlos Hyde is still in the prime of his career at just 27 years old. He was a top option at the running back position in the NFL Draft when he came out of Ohio State, and the 49ers showed their belief in Hyde by selecting him in the second round in 2014. After being limited by injury in 2015, Hyde is on the rise. He gets the label “injury prone” far too often and I feel it’s unfair. Sure, Hyde only played in seven games in 2015 due to a broken bone in his left foot, which later required surgery, but in the past two seasons, he’s played in 13 and 16 games. In 2016, Hyde missed the final three games due to a sprained MCL, which carries a lower risk of re-injury compared to the ACL. This is because the MCL has excellent healing capabilities, rarely requiring surgery.

Following the 2016 season, Hyde was vocal about his frustration with his inability to play in a full season since entering the NFL. He reportedly changed his nutrition and workout plan, and the difference showed in 2017. For the first time in his career, Hyde played in all 16 games, all while seeing the highest workload of his career. His MCL injury and broken foot are unlikely to be an issue moving forward, so injuries should not deter you from acquiring the services Carlos Hyde in your dynasty league.

Carlos Hyde was one of the bigger names on the free agency market this past March and signed rather quickly. Coming off his best statistical season to date, Hyde was likely to secure a role as the starter in a new backfield and be compensated accordingly. Cleveland made sure of this, signing Hyde to a three-year deal worth $15.2M in total. On the surface, this deal makes it seem like the Browns want to commit to Hyde for the next three seasons, but that may not necessarily be the case. When you break down his contract over those three years, it really is a one-year contract with two additional years built in if Cleveland decides to keep Hyde around for 2019 and beyond. In 2018, Hyde is set to make $5.5M. However, there is a potential out in his contract after 2018. If Cleveland likes what they see in Nick Chubb, they could easily move on from Hyde with just $2.3M in dead cap money.

This contract situation is beneficial for Hyde for two reasons. First, Hyde is going to be paid well this season. As I stated, he’s making five and a half million dollars in 2018, which ranks 7th in the NFL among running backs this season. That’s more than Ezekiel Elliott, Todd Gurley, Mark Ingram, and David Johnson. This tells me that Cleveland is going to use Hyde in 2018. They’re paying him big time money – they might as well use him, right? Nick Chubb isn’t going to just walk into this backfield and command 20 touches per game right away. The second reason this contract is beneficial is that of the fact that Cleveland can move on from Hyde after 2018. If Chubb comes in and proves to be a viable starting running back for just a fraction of the cost of Carlos Hyde, Cleveland will likely part ways with Hyde. For those of you concerned about a timeshare in Cleveland’s backfield or worse, Hyde becoming Chubb’s backup, he could easily find himself on a new team in 2019.

This situation reminds me a lot of Demarco Murray and Derrick Henry in Tennessee. Everyone was worried about Murray’s ability to produce after the Titans drafted Derrick Henry in the second round of the NFL Draft. Everyone is ready to anoint Nick Chubb as the Browns’ starter, but I believe Hyde will still hold a lot of value in 2018 and beyond. Buy him now, while his perceived value is low.