The Battle of the Backs – Kenny Gainwell vs. Kylin Hill 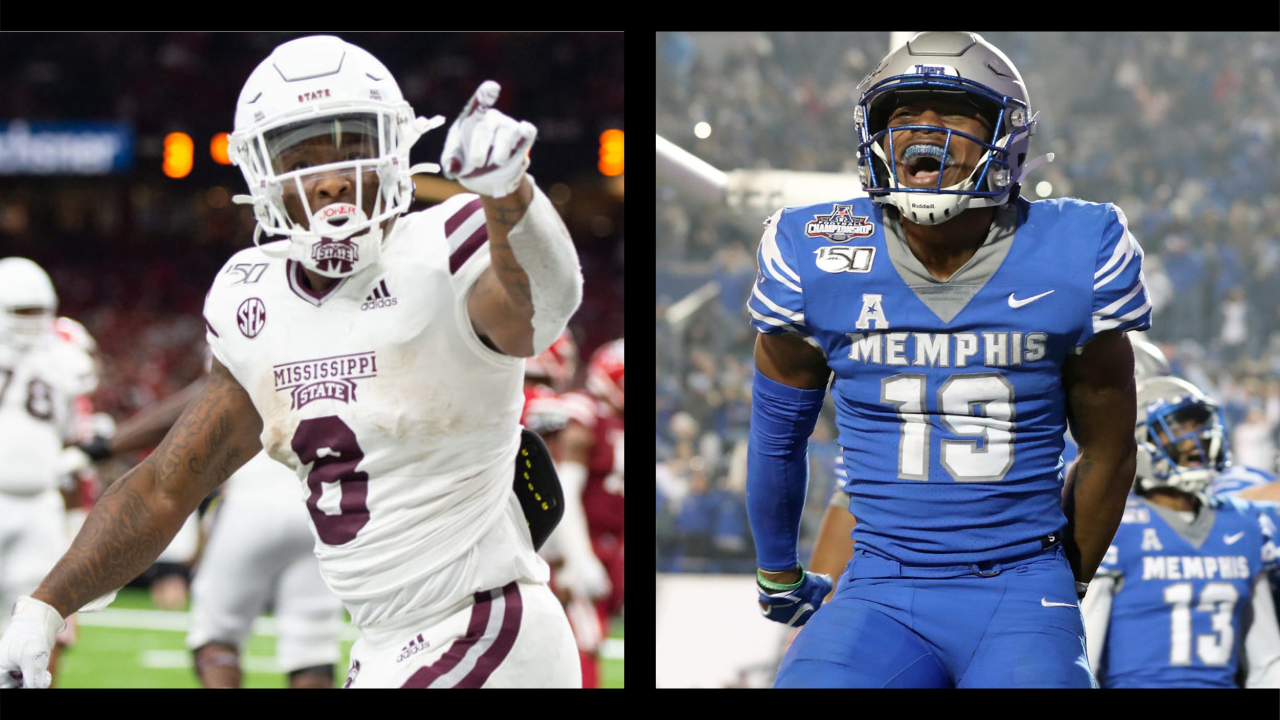 Writer Tyler Moss compares two second-tier running backs in the 2021 class and how they can leap to becoming an elite NFL player.

Junior Kenny Gainwell out of Memphis and senior Kylin Hill from Mississippi State are both second-tier running backs with high upside in the 2021 draft.

Gainwell and Hill are both receiving options out of the backfield. Both players’ dynamic ability to impact a game in multiple facets makes it easy to catch the eyes of NFL teams looking to capture that three-down back with a smaller price tag. Simply put, both backs cause issues for opposing defenses and their ability to game plan for an offensive attack.

Both Hill and Gainwell have just one year of high-level production. They need to develop for each runner to take that next step as an NFL impact back. There is a lot to like in both of their games. In the right situation, I think they can take over and dominate at the next level. With Covid-19 limiting their play in the 2020 college football season, it will be interesting to see how a team values them.

With draft capital being a big part of each player’s potential, what teams are willing to invest in them will be most important. However, before we can see their future value, we must analyze their current value as prospects.

Statistically speaking, both players stuck out as impact players for each of their respected teams in 2019, Hill as a junior and Gainwell as a sophomore. Gainwell impressed while holding off Antonio Gibson in the Memphis backfield.

While Hill doesn’t possess the reception numbers Gainwell does, he is still impressed against a higher level of competition. In 2020, Hill put up 23 receptions in just three games. Hill also comes with high-level ball security skills. Hill did not fumble in 38 consecutive games.

The ability to read a play and understand how to use it to your advantage in a rushing attempt is vital for any good running back. Having high-level vision separates elite and good backs at the next level. If a running back struggles to see an open space or make decisions based on play development, they will struggle to see consistent volume and earn trust from a coaching staff.

Hill understands putting himself in open spaces in the receiving game, he knows how to read holes in the rushing game, and he uses this to turn seemingly nothing into positive yardage. Hill isn’t the most natural runner, but he more than makes up for it with his understanding of attacking space and making defenders pay with his open-field elusiveness.

Gainwell exhibits excellent lateral movement and excels in space. He is not a natural runner, which may hinder opportunity at the next level. Gainwell has solid open space vision but struggles to see the hole in traffic. Again, in space, Gainwell can read the collapsing defense and make his way into the open field.

Overall, I believe Hill possesses better vision in both the rushing and the receiving game than Gainwell.

While not being as natural of a runner, Hill has fantastic footwork to pair with his hands and playmaking ability. His ability to make quick cuts and hit openings and avoid players in open space is pro-level. His vision plays a factor, but his feet do the work in creating the explosive play.

Stop and go speed and great hands are some of Gainwell’s most outstanding features. Gainwell uses his legs to be shifty in open space, making him a dangerous threat for defenses. His high-level shiftiness and separation creation are why Gainwell put up monster numbers in his 2019 campaign. If he gets into open space, he can and will beat you with his legs. His elite-level elusiveness should translate well to the next level, even with the competition level dramatically increasing.

Both backs demonstrate elite-level abilities to catch and evade with the ball. Overall footwork, the edge goes to Gainwell.

As far as receiving goes, Gainwell could be the best RB in the class. His ability to work out of the backfield, in the slot, and outside makes him a multi-dimensional threat. He can beat you on screenplays and short routes or any other way an offensive coordinator can get the electric back in space. Sometimes he falls into the trap of running without the ball, which comes with him still being relatively young. He sees open space very well and has a clean route running tree that makes him a solid overall player when it comes to the receiving aspect.

Hill is in the upper echelon of guys who catch the ball out of the backfield. He has phenomenal ball-catching abilities, and combined with his vision in open space, he is always a nightmare for opposing teams. He has the hands of an NFL receiver and the vision to run routes effectively out of the backfield. Hill showcases this natural receiving ability constantly on the field and makes him a dynamic threat in any place on the field.

When picking who has the best overall pass-catching abilities, you have to give the edge to Gainwell.

The ability to catch is as essential as knowing what to do with it when it is in your hands. Backs that show an inability to receive have become dinosaurs in the NFL. With the rapid increase in passing volume in the NFL, backs that can’t catch have become unreliable for teams, just as vital is the ability to evade when you have the ball. Great footwork can be just as important.

Gainwell is most commonly known for his high-end receiving abilities and upside. Memphis is known for building up quality backs in the passing game, and none better to capitalize with this receiving focus than a guy with the hands of Gainwell. He showcases the ability to pinpoint balls and bring down tough plays and has the footwork to be elusive after the catch. It’s close, but I have to give hands to Hill.

Perhaps the most undervalued aspect of a running back in the NFL is the ability to block for a QB. If a young receiving type back is looking for volume at the next level, pass blocking is integral to their arsenal. Pass blocking can be the window of opportunity for a young back to see an increase in volume in the receiving and eventual rushing attack.

Hill is the Keshawn Vaughn of this class, the clear-cut run blocking RB1. Not only is he a skilled back at picking up blitzes by oncoming defenders, but he also great at reading them. Hill is a fantastic receiving back that understands the priority of maintaining a clear backfield for his QB to work. Young third-down backs sometimes lose sight of keeping the backfield clean before leaving to become a dump-off option. Hill reads the defensive attack, understands his line coverage, and makes his decision as a receiving option in the seconds before the snap.

Gainwell produced the highest efficiencies in pass blocking in the nation in 2019 with a 100% grade. He pass-blocked the third-most in the country, a total of 75 times per PFF. Gainwell showcases high-end abilities to protect the passer, a feature that will lead to offensive opportunities in the NFL. Gainwell demonstrates good balance and vision to read on-coming blitz packages.

Both have elite-level pass-blocking skills. The two might be the two best in the class at pass protection and overall third-down value. I have to give a point to both for their blocking abilities.

Hill and Gainwell split the comparative competition in metrics and stats at 3-3.

Hill and Gainwell will both be great second-tier guys who can become productive NFL backs. Both possess the necessary traits to become a lead feature back for an offense, but with both taking a year off, time will tell if they progressed in sitting out.

Fortunately, the backs will find snaps with their developed third-down abilities and maturity in pass protection. I see both backs going between the third and fifth rounds, and landing spots will decide the rest. My active rookie rankings have them back-to-back as the fifth and sixth-ranked backs in the class (Hill at five and Gainwell at six). Both backs are pretty close, and the final tiebreaker will be the landing spot.

We can hope for the greater good of each player’s skill that they can showcase it at the next level.