The Case for drafting Josh Allen 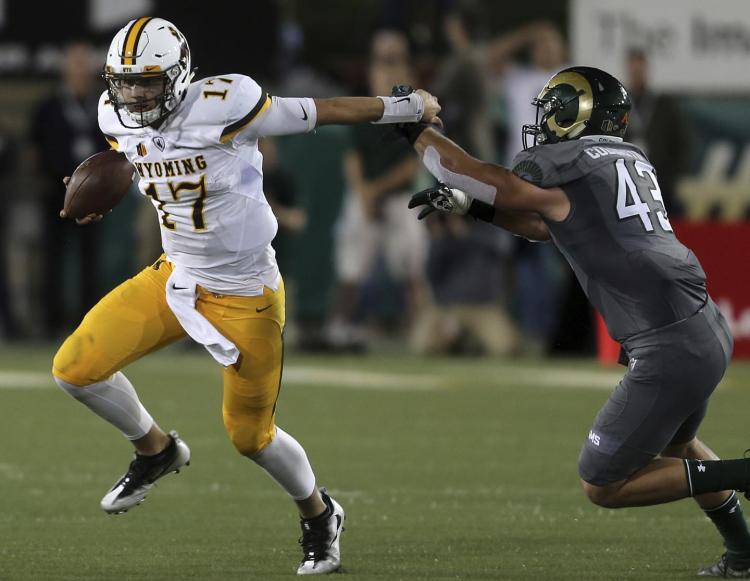 I am a Josh Allen fan, there are literally dozens of us out there. I think his huge arm, coupled with his elite athleticism and familiarity with a pro-style offense, makes him far less of a bust candidate as people would think. Now in a vacuum, he is far from my favorite Quarterback in the class, but he is going much later than the other rookie quarterbacks drafted in the first round due to (well warranted) concerns about his accuracy and his level of competition. However, I do think this is a case of fantasy groupthink, as Allen has been already considered a bust before he has ever played a snap. Even if you don’t believe in him like I do, the key for me is that Josh Allen’s going to return on your third round investment, and I wouldn’t make any crazy trades if you miss out on the other guys. Here’s why.

He is an impressive athlete and more importantly mobile

Josh Allen ran a 4.75 in the NFL Combine, which is in the 78th percentile of Quarterbacks, which was coupled with his burst score being in the 82nd percentile of Quarterbacks. He was the 4th rated QB in SPARQ score in this year’s class and was in the 85th percentile of all quarterbacks ever tested. He often ran the option in college and ran for over 500 yards during his Junior year (his best overall season), from this you can deduce that he will be able to produce on the ground in the NFL. Last season the average NFL starting QB contributed around 2 points per game on the ground. However, when you split that out by starters who ran faster than a 4.8 (15 starting QB’s) and who ran slower (17 starting QB’s) the difference is 3 ppg and 1.5 ppg respectively. Of the seven quarterbacks who ran sub 4.8 and had at least one 500 yard rushing season, they averaged 4.4 rushing related fantasy points per game. Seeing that there are Cam Newtons and Russell Wilsons in this group, I took the two worst scores in that group (Carson Wentz & Alex Smith) and determined that you can project Allen to add 2.5 rushing points per game minimum with an upside of 4.5 points (He’s not Cam Newton, 7 points isn’t happening).

Setting Matt Ryan’s 230 points last year as the benchmark as a top 15 QB, Allen would need to get 190 Passing points (12 per game) to become a top 15 quarterback. Assuming the worst possible expected rushing outcome for his athletic profile and 22 interceptions (last years league lead) Allen would have to throw for 3600 yards and 22.5 touchdowns to be the QB15 in fantasy. Or essentially Blake Bortles, last year’s QB13 who added 2.75 ppg on the ground. As Blake Bortles has consistently proven, you don’t have to be a great real-life Quarterback to be good in fantasy if you can run. Josh Allen can run.

The Law of Diminishing Returns and next year’s trade value:

Rookie Quarterbacks tend to get a weird boost in year two for seemingly no reason. Mitch Trubisky started 12 games last year and was on pace for less than 10 touchdowns over 16 games. This year, the Bears get a new coach and add a few receivers, and Trubisky value grew immensely without him proving that he is even an average Quarterback. If you remember, Trubisky also had the premature bust label applied to him last year. Pat Mahomes, a big-armed mobile Quarterback just like Josh Allen, went from a third-round rookie pick to a guy who can garner an early second round pick today, perhaps more. He made one start last year in which he did not throw a touchdown under no pressure. Baker Mayfield, while more talented in my opinion, is going in the early to mid second round. The best way to think about it is that there are far more Quarterbacks worth a second round pick than there are Quarterbacks worth a first-round pick. The bars to clear to return value on your rookie pick is much higher for Mayfield, Rosen, and Darnold than it is for Allen who just has to show up and play to outperform his third round value.

The Bills didn’t exactly get Allen at a discount, essentially trading Cordy Glenn, the 22nd, 53rd, and 56th pick and gutted a playoff team so that they could move up and get him. He will get every chance to succeed and as such, you can expect the Bills to make moves to build around him organically building up his trade value.

Are we sure that Darnold and Rosen are much safer picks?

Darnold had 22 turnovers as a senior in college, Josh Allen had 11 (against worse competition and on significantly fewer attempts I’ll concede). Rosen’s college completion percentage of 60.9% doesn’t exactly scream deadeye either. Neither presents the rushing floor that Allen has (Rosen, in particular, is slow as molasses) and at their current ADP’s of the second round, I am much more comfortable waiting a round for Allen in the third. This isn’t a smear campaign on Darnold and Rosen, more of a comment that all the Quarterbacks present different challenges to overcome not just Josh Allen’s accuracy issues.

To wrap up, I understand that Josh Allen is a risky pick but I also think he is the best Quarterback Value based on his current ADP, and someone will be willing to buy him for more than you paid for him this time next year, which I just don’t see happening for any of the other quarterbacks because their draft stock is already so high. 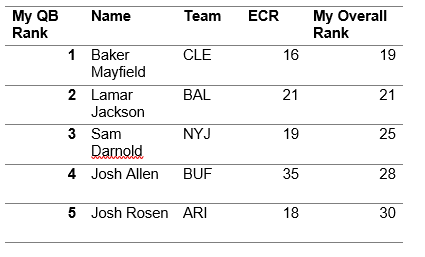