The Case for Keenan: Buy, Sell or Hold?!

Is it time to get out on Keenan Allen? Or should you be looking to acquire for a title run? @FFEvanlution breaks it down for you. 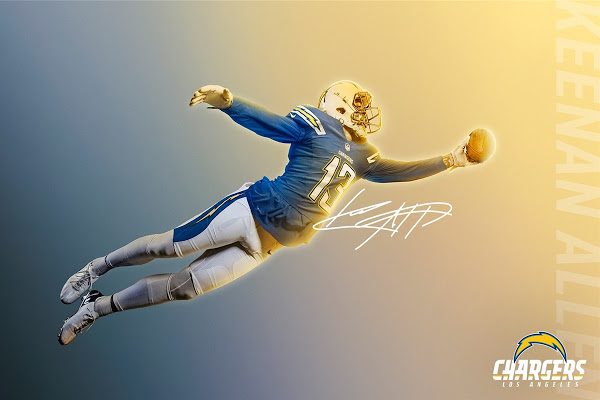 What is Keenan Allen’s dynasty value right now? As you can see from the ADP data, if Keenan Allen were a Tom Petty song, he would be “Free Fallin” (I’m not even sorry). The general consensus in the dynasty community seems to be that Keenan Allen is dead and buried. It seems odd to me as he set a franchise record for the most passes caught in a single season and surpassed 1,000 receiving yards for his 3rd consecutive year in 2019. Allen has an ADP of 41. I have been in several startups this year, where Keenan was going in the 5th and 6th rounds. Looking at his overall Dynasty Nerd rank (12) vs. his current cost (WR22’ish), I sense a major opportunity for the shrewd dynasty owner. So join me as we dive into whether Keenan Allen is a buy, sell, or hold for your squad.

The cause for concern:
So why is everyone freaking out? What are the core issues here, and are they valid? From what I have seen and heard, it seems to be mainly three things; QB play, age, and injury history. Let’s tackle them one at a time.

The biggest worry everyone seems to have is, “Philip Rivers isn’t there anymore!!!” I do appreciate that Rivers has been there Allen’s entire career. Still, my counter-argument for this would be, first and foremost, Rivers wasn’t even good last year!

Let’s take a little peekskie at what we actually got from Rivers in 2019. We’ll let the numbers speak for themselves, sound good? Looking at PlayerProfiler.com, we see that Rivers had a True Passer Rating of 83.1, which was 24th in the league. (Not great, Bob!) He also threw 36 interceptable passes, which was 2nd in the league. (No prizes for guessing who was first! *cough JAMEIS) His deep ball completion was ranked 27th, even though he was 6th in deep-ball attempts. Rivers’ accuracy was 16th, his Passing TD’s were only good enough for 15th and in Danger Plays, i.e., making bad decisions with the rock, he was 5th overall. In other words, it isn’t a very high standard that Rivers is leaving behind. Tyrod Taylor or the rookie Justin Herbert should be able to keep up with those mediocre levels just fine.

Despite all of Rivers’ inefficiencies as a passer last year, he still managed to be 4th in overall passing yards, 5th in completed air yards, 3rd in pass attempt distance, and 5th in Redzone attempts. In short, good old fashioned quantity over quality was the order of the day for Phil. I believe these volume stats speak to a combination of coaching philosophy and negative game scrips (playing from behind in games) more than just simply to the QB himself being a “gunslinger.”

As far as negative game scripts are concerned, the Chargers play in a very tough division. I expect a lot of shoot-outs if they want to improve on their five wins of last season. While they have improved their defensive unit (at least on paper) through the draft and free agency this year, I don’t believe the changes will be enough for them to rely solely on defense and the run game when playing teams like the Chiefs, Raiders, and Broncos twice a year! Being behind = needing to sling the rock = Keenan Allen garbage time = YES PLEASE!!!

New OC Shane Steichen, who took over in October of 2019, looks set to continue in 2020. That will provide continuity in play calling. After Steichen took over, the Chargers’ overall passing offense improved. They continued to pass the ball at the 6th highest rate in the league. Another point to note is that Shane was promoted to OC from QB coach, where he had been working since 2016. The 2017-19 seasons were Allen’s most productive in his career. Shane will have a great appreciation for what Keenan brings to a QB in that offense.

To sum up this section, I don’t believe it was Rivers’ stellar QB play that sustained Allen’s WR1 season in 2019. I think it was influenced by game script, coaching philosophy, and Keenan’s talent as the clear alpha receiver. Allen and Rivers had a great connection, and I don’t want to discount that, but great receivers create opportunities for themselves despite changes at the QB position.

Everyone is obsessed with age in dynasty…I mean, OBSESSED!!! It is certainly something to be aware of, but there are several factors worth considering before worrying about how many birthdays your potential trade target has celebrated.

One of the big reasons people get antsy about elite WR’s getting older is their speed. They slow down and therefore aren’t as tough to guard anymore, don’t demand as many targets, and become less and less fantasy relevant. The thing about Keenan is, he never had much speed, to begin with! He doesn’t win with his speed. He wins with his elite route running and great hands. Neither of those is going to necessarily get much worse with age, at least not for a couple more years! Great slot receivers can easily play into their mid 30’s at a high level, and there is no reason to believe “Slayer” won’t be another name on that long list.

Another great thing he has going for him is volume. Keenan had a 26% target share in 2019, which was 9th highest in the NFL. Who are Keenan’s biggest rivals for targets this season? Mike Williams is a very talented receiver but is more of a deep threat and does not demand a large target share. Hunter Henry is a very gifted tight end but has not proven he can stay healthy for an entire season. Last, but by no means least, Austin Ekeler is a fantastic pass-catching back and will most certainly get work in the passing game, but I don’t think he will be a risk to the main man in 2020. (Ekeler was already there in 2019 when they both finished as top tier talents.)

Keenan has been a target hog all the way back to college, where he averaged a 33.5% target share for the California Golden Bears. The Chargers did not add any significant WR depth in the draft and have not gone after any free agents, so Keenan is very much still the man for 2020. I don’t think age should be a factor when considering whether you want Keenan in the squad. Unless, of course, you are in a complete dumpster fire of a rebuild that could take you several years to dig your way out of, in which case you won’t be looking to buy a WR like Keenan Allen anyway.

So I am not going to spend long on this because I think it is ridiculous, but some people still throw around the “Keenan is injury prone” argument as if it is a scientific fact. The truth is number 13 hasn’t missed a game in three years… THREE YEARS PEOPLE!!! I know he had back-to-back seasons where it broke your heart a couple of years ago, but we need to build a bridge and get over it! Any NFL player can get injured at any time. However, he has shown the ability to stay on the field the last couple of years and put up fantastic numbers, so I think you shouldn’t let this “injury-prone” stigma scare you off investing in the WR1 for the Chargers.

So the million-dollar question is, should you be buying Keenan or not?! (I’m guessing you can tell by the tone of this article where I stand already.) I would 100% be buying Keenan if I was in any way a contender this year. I believe it is entirely realistic he is a rock-solid WR2 this year, even with the QB change looming. If everything falls just right, he could even sneak into the back end of the WR1 category in a ppr league based on volume and sheer talent. When you look at the risk vs. reward considering his deflated price tag, it is a bit of a no brainer for a team trying to bring home the ship.

A couple of recent trades for Keenan Allen according to DLF (dynastyleaguefootball.com) include:

Basically, I would go out and kick some tires in a couple of your leagues. See if there are some cheap deals to be had. I recently received Keenan Allen and the 1.08 for Leonard Fournette in a league where I already owned the 1.04. I used my 1.04 to draft J.K. Dobbins as my Fournette replacement. That left me with Keenan Allen as an immediate contributor in my starting lineup and the 1.08 to invest in the future of my squad as well. If you can swing a deal like that or send your contending 2021 1st by itself and grab a stud like Keenan, then that is the type of move you should be making.

If you are in a rebuild and you own Keenan, I would suggest holding for now. Once the season starts and people see the goods being delivered once again, the price will go up, and you will get a better return for your asset. After all, seeing is believing.

I hope this has helped a bit and given you the fire to go out there and get some Keenan Allen on your squads! The man is a baller!

Hit me up on Twitter if you wanna chat about anything I covered in this article or just want to talk general dynasty goodness over @FFEvanlution!