The Curious Case of Corey Davis

Will Corey Davis change teams this offseason? Where does he best fit? @Culture_Coach take a look at some of the options. 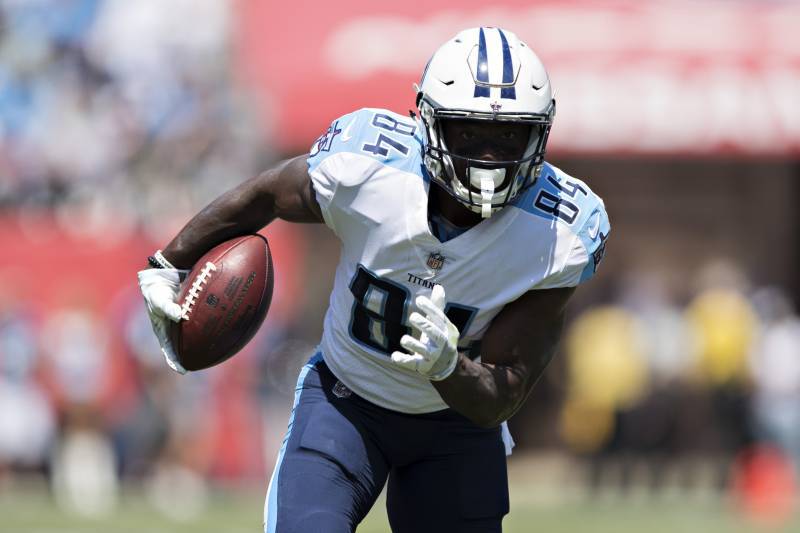 Conventional wisdom has long maintained that you must be patient with wide receivers. Expecting immediate production, fantasy or otherwise, was a fool’s errand. Then guys like Mike Evans, Amari Cooper, Michael Thomas, and Odell Beckham raised the expectations for rookie wideouts.

Coming out of college

Davis was a force at Western Michigan. Checking in a 6’3″ 209 Davis looked like he was made in a lab to be a WR1 for fantasy. Drafted with the fifth overall pick in the 2017 draft Davis was supposed to be the marquee weapon for Marcus Mariota and the Titans.

So what happened was

The Titans had an aging Eric Decker and journeyman Rishard Matthews atop the depth chart. It looked like a perfect situation for Davis. A hamstring injury led to a slow start as a rookie. Injuries to quarterback Marcus Mariota caused Davis to not develop a rapport with the quarterback.

Going into year three for Davis, the Titans drafted A.J. Brown, another wide receiver, in the second round. Brown burst onto the scene with 1000 yards receiving and 8 touchdowns. During the 2020 season, the tandem of Brown and Davis showed to be a formidable duo. But, for Davis, it also showed that he was best used in the 1B role. In a high-powered offense where you can have two fantasy-relevant wide receivers, Davis can provide value.

The Titans did not pick up Davis’s fifth-year option so he heads into the 2021 offseason as a free agent. According to Spotrac Davis should command a contract in the three-year $27-$30 million range. That isn’t going to break the bank, but with the salary cap retracting some teams will be left out of the mix. The Titans are currently 21st in cap space so they will have to make some moves if they want to keep Davis in the fold.

Where does he go?

From an available salary cap perspective, the Chargers, Jaguars, and Football Team can afford Davis. From the “have a Batman to Davis’s Robin” perspective, those same teams fit as well.
Credit: AP Photo/Charlie Riedel

The Chargers already have the established alpha in Keenan Allen. They did pick up Mike Williams fifth-year option so that reduces the need for Davis. The Chargers have an out in Keenan Allen’s contract after the 2021 season. Bringing Davis in to pair with Williams or Allen in 2022 could be a good move.

Jacksonville has the most cap space, a new head coach, and phenom Trevor Lawrence (likely) coming in to be the quarterback. Bringing in Davis to pair with D.J. Chark and offense weapon Laviska Shenault sets the Jaguars up to have a very potent offense.

The Washington Football Team needs to work out the quarterback situation. They just resigned Tyler Heinicke to a two-year -contract, I don’t believe he is the long-term answer or short-term for that matter. The real treat though is Terry McLaurin. We saw that Davis can thrive when he lines up across from a true WR1 as he did in Tennessee. It might be the place for him.

What do you think?

What are your thoughts? Does Davis achieve sustained success? Does he fade away after changing teams? Or is he destined to tease us with flashes of greatness followed by periods of underperformance?

I’d be willing to take a shot on Davis as my WR3. Davis finished as the WR30 in 2020. His best finish has been WR28 in 2018. I think Davis’s ceiling is WR20. With the changing team narrative, you might be able to snag him for an early second. I’d even be willing to toss in a late fourth to close the deal. If I’m selling though, I’m going to do everything I can to hold out for a late first, or maybe a 2022 first.

Have you subscribed to the Dynasty Nerds youtube yet? What are you waiting for? Join more than 5000 of your closest friends and don’t get left behind.