The Cut Back: RB Starts/Sits Week 7

Is this the week we see another rookie RB break out?
Can Marlon Mack handle the tenacious Texans’s D?
What do we do with the Green Bay backfield in the wake of the Jamaal Williams breakout?
@ekballer has the answers you need! 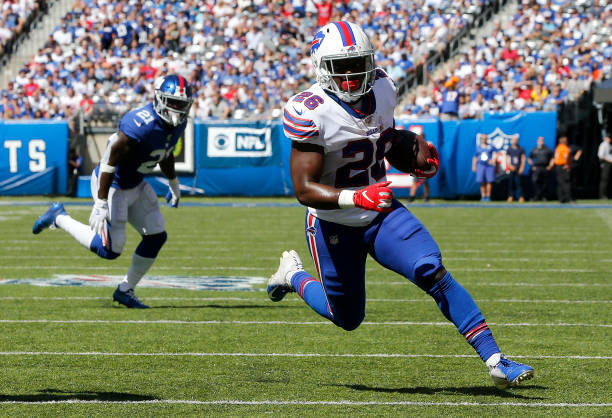 Some players faded Lindsay & Freeman last week against the Titans. The Titans rush D has been tenacious- allowing just 2 TDs coming into the week- but both runners still had a day, finishing 11th and 21st respectively.

For week 7 the Broncos host an angry KC team coming off consecutive, ugly losses. Expect Mahomes to come out gunning and put up points.

But both of these backs are involved in the passing game, so neither will be game-scripted out even if KC jumps out ahead. The Chiefs are the second-most generous ground defense in terms of total yardage and yards per attempt.

Both backs will be playable; the elusive Lindsay could be a top-15 back.

If you’ve read this column weekly, you’ll have noticed that a recurring theme is to attack the Bengals defense. Through six weeks they have allowed the most yards and TDs to opposing runners.

Last week the Bungles gave up the RB2 spot to DJ on a 102-yard 2TD performance; they also handed his backup Chase Edmonds the RB13 finish.

Fournette just went for 114 yards against an overperforming Saints D that’s been shutting down opponents for the past several weeks. He’s back to full-on stud status, with as good a floor as any back. We haven’t seen the ceiling game yet, but it’s likely coming this week.

Fire him up in all formats. Get him in your DFS.

Jacobs is coming off a bye. In his last outing, he went for nearly 150 yards and 2 TD against the NFL’s premier defense in the Chicago Bears.

He’s well rested, has had an extra week of game planning with Gruden, and he gets the third-softest matchup for a back in the GB Packers, who will be on a short week after playing the Lions on MNF.

All indicators are aligned for another blow-up for Jacobs, who could be looking at another top-five finish here.

You don’t need me to tell you to start Cook. He’s been on a world-beating-rampage and is likely carrying your fantasy team into the playoffs.

This take is just a quick matchup highlight.

He’s coming off a battle with the stout Eagles defense and an RB13 finish, his second-worst of the season.

In week 7 he gets the Lions, already a bottom-8 rush D, also operating on a short week from the MNF game with GB. They allowed nearly 200 yards to the GB backfield this week.

Mack’s another back coming off his bye; the extra rest always does the runners good. He’s also coming off a game in which he nearly hit 150 combined yards and three receptions.

He’ll need that rest to deal with the Houston Texans on Sunday. While they rank as a middling team in terms of Y/A allowed, no team has run for more than 100 yards on them since week 2- and that includes CMC’s Panthers in week 4.

But this is the Frank-Reich-led Colts that’s been figuring out life without Luck and beating good football teams on the way. They have some decent weapons for Brisset but expect them to try to keep the ball out of Watson’s hands and run Mack behind that elite o-line all night long.

We’re not sure who’s going to be carrying the ball for McVay next week. There’s a chance that Gurley returns, but it seems more likely we’ll get a repeat of the week 6 timeshare with Malcolm Brown and Darrel Henderson.

Atlanta’s been slowing down running backs on the ground, but, if there’s one unwavering truth in fantasy football, it’s that Dan Quinn’s defense is basically a free space for pass-catching backs.

In the Gurley-less Rams offense, that likely means Darrell Henderson, who broke a couple of long runs in limited work against the Niners.

They’ve also given up plenty of rushing TDs (6) so even if it’s more of an air-attack game-plan from McVay there’s still a good shot that Brown is relevant as well.

Singletary practiced Monday. It seems likely he’ll be full-go for Sundays romp against the disastrous Dolphins (but monitor reports, hamstring injuries can be tricky).

If he plays, get him in lineups. This Dolphins team just allowed 118 yards to 34-year-old Adrian Peterson, whose previous best 2019 performance was just 37 yards. In week 4 they gave up 122 total to Austin Ekeler… in week 3 it was 128 to Tony Pollard…

Singletary was well on his way to a breakout before his injury, nearly hitting 100 yards in his debut and following that up with 57 and a TD week 2.

All things point to a big game if the young back is healthy, easily top-24, with the upside for more.

Frank Gore should also be startable, even if Singletary plays; if Singletary is held out, look at Gore to take after fellow vet AP and find the top 20 himself.

The LA Chargers seem to be the NFL’s yearly hard-luck story. There’s no franchise more plagued with debilitating injuries; they had 10 players on IR for week 6 including stud safety Derwin James, pro-bowl lineman Mike Pouncey, and lineman Russell Okung.

Losing Okung and Pouncey is a killer for an o-line that was already struggling. In the week 6 thumping by the Steelers Phillip Rivers was under constant duress. The Bolts backfield of Gordon and Ekeler ran for 2.3 and 2.0 Y/A respectively. They didn’t look good.

One would think that this is all the more reason to feature the backs in the quick passing game, but the duo combined for only two targets on the night.

The Chargers get a matchup against a top-10 rush defense next week on the road at Tennessee. Although Lindsay and Freeman combined for just over 100 yards last week against this defense, I doubt the Chargers do the same. I’m avoiding the Bolts running game until Anthony Lynn and the o-line sort this mess out.

Welp. Mixon was a sit for me last week despite drawing a relatively easy opponent in the Ravens. If you played him, he rewarded you with 8 carries for 10 yards and two catches for another 29.

If you’re a redraft player, hopefully, you listened to us and sold him after the Cards game.

If you’re a dynasty player, put him on the bench and leave him there.

His opponent this week- the Jacksonville Jaguars- have given up the highest Y/A in the league through six weeks. But more than half of that came in just two games, a 269-yard romp by the Broncos backs and a 149-yard game to the Panthers and CMC.

Leave him on your bench and forget he exists until something changes.

I love Jones. The Packers have been running the ball well.

But this was a fade for me even before the Jamaal Williams breakout game on Monday night.

Oakland is not the wet-paper-bag D you might expect if you haven’t been paying attention. A top 6 rush D in Y/A and top 12 in yardage and TDs, the Raiders are stout against the run and weak against the pass.

It’s unlikely I’m actually sitting Jones, but I’m certainly tempering expectations. This backfield could go either way on any given night, and given that this seems like a game in which the Pack attacks through the air, it’s more likely that it would be a Jamaal Williams night if either back is successful.

I’m not sure what’s going on with the ground game in KC. Reid seems to have more-or-less abandoned the run altogether in this offense, though some might say it would be wise to protect his battered young QB by running more than 10 times a game.

In week 6 both primary backs were effective with their carries- McCoy averaged 4.5 Y/A, while D-Will ran in a 6 yard TD- but neither is touching the ball enough to be considered for an RB2 play. Oh, and Darrel Williams saw the field before Damien, just to add to the mess.

Denver’s not a tough matchup, but who can you even play here? Look for better options with safer usage.