The Cut Back: Running Back Start/Sit Week 6

Get Your Week 6 RB Start/Sits While They’re Hot!
Should you start a Charger’s back? Was Mixon’s week 5 the beginnings of a bounce-back? @ekballer is here with the research you need! 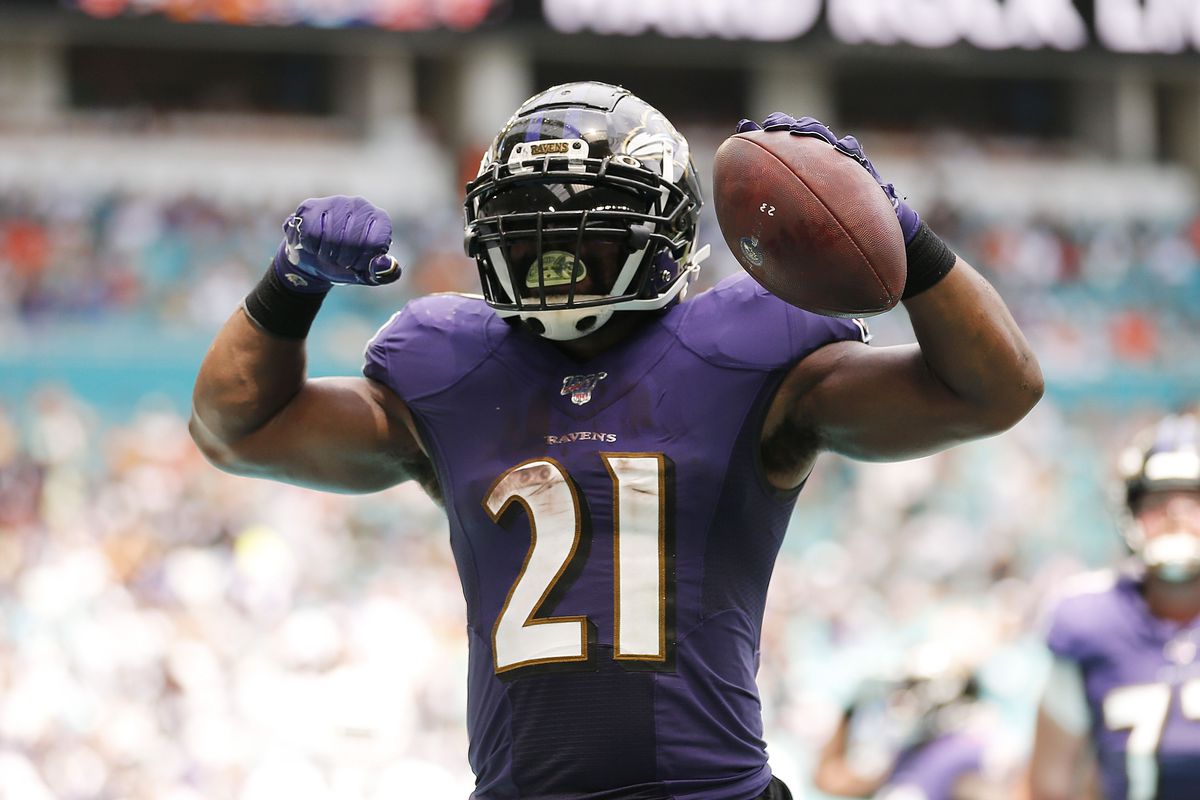 Don’t take these as law. Read the data, understand the context and make the best decision for your roster. Ask questions, my DMs are open.

Ingram sits as the RB 9 heading into week 6. It’s been somewhat feast-or-famine for the veteran, as he’s followed up each of his huge “boom” games with a single-digit outing.

Week 6 should be the former. A sound principle so far for 2019 has been to start everyone against Cincinnati, and this week that means Ingram. The Bungles have given up the most yards and TDs on the ground this season. Ingram has two multi-TD, 100-yard efforts on the season.

It’s a match made in fantasy heaven.

KJ hasn’t been the breakout star we’d hoped for to start the season. Averaging 13 PPG and just 3.4 Y/A, he’s a low-end RB2, a major disappointment to owners that were hoping for top-shelf performance by the young back.

But, if his week 4 play is an indicator of things to come, the breakout could be beginning: 157 combined yards, 4.8 Y/A, and, most importantly, 26 carries. Yes, it was against the pliant KC defense, but even the week prior Johnson was fed 20 times against Philadelphia.

This week he gets a Green Bay squad that is just as bad against the run as it is good against the pass. The Packers’ elite secondary ranks 3rd in INTs and top12 in both completions and TDs allowed; their rush defense is tied for the 3rd-worst Y/A, right up there with the Browns and the Chiefs. They seem to be one of the surest funnel defenses this October.

There’s some concern of the game getting out of hand- the Pack jumped out to a sizable lead Sunday against the Cowboys- but I think Matt Patricia makes the needed adjustments to keep this close.

Look for KJ to end as a high-end RB2 this week; if he finds the endzone, he could easily be a top-12 play.

Let’s stay in this game for a minute. The Packers are at home and coming off a thumping of the Cowboys, which saw them pick off a struggling Dak Prescott three times (and another two called back… to be fair, the first INT was a bad drop on a good throw.)
The highlight of the game for any non-Cowboys-fan was Aaron Jones setting Jerryworld on fire for 182 yards and 4 TD. Finally set free from his timeshare- which unfortunately came about due to a scary injury to Jamaal Wiliams- Jones showed that he was born to be a feature back, and is capable of a place in the elite tier of RBs when given the opportunity.

The Lions are a bottom-8 team against the run. There’s zero chance of the Packers being blown out. LeFleur showed us last year that he’s capable of leaving well enough alone when he finds what works, and it looks like he’s found it in Green Bay.

Look for another monster for Jones. Thoughts and prayers to Jamaal- we wish you a speedy recovery- but we hope that you’re coming back to a spot on the pine as Jones finally has his full-on breakout season.

In Melvin Gordon’s first game back- a game which saw the opposing Denver Broncos jump out to an early lead- Ekeler’s carry count cratered, but he saw 16 targets. He caught 15 balls for 86 yards.

Ekeler hasn’t stolen Gordon’s job, but, if you’re LA, you don’t leave that kind of production on the bench, particularly not with a thin, banged-up receiving core.

Generally, when a back sits out multiple games we’ve seen them take a few weeks to get back into the groove. Gordon is no exception; he’ll work his way up to lead-back workload over the next couple of games.

This game should still be Ekeler’s, though the snap count should be closer to even than to the 65% / 45% we saw in Ekeler’s favor last week.

The Bolts get a Steelers team this week that is likely to feature Devlin Hodges at QB. Unless you’re expecting the second coming of Gardner Minshew, they should struggle to put up points, yielding a game-script that is favorable to the Chargers. While that would generally suggest ground-and-pound- and thus Gordon-, the Steelers have been stingy against the run, allowing just 3.9 Y/A. This should offer up more opportunity for the run-through-the air / short passing attack on which Ekeler feasts.

Don’t be scared of Gordon’s return. Ekeler should stay an RB2 even when Gordon’s snap share is back to its normal level. For this week, it’s safe to expect that as his floor.

The good news is that Sunday, in his first week back from injury, D-Will saw more than double the snaps of any other KC back.

The bad news is that he didn’t do much with it, putting up just 38 combined yards.

Still, his backfield mates did even less. The guy touching the ball in the KC backfield is a valuable asset, and no one did anything to take that job away from Williams last week. In a game with an O/U of 55.5- where the Chief’s implied total is over 30 points- you want to start any player that’s touching the ball frequently.

Andy Reid is smart. With Mahomes hobbled, expect a pivot toward the run game and the short passing game. McCoy’s reported failures in pass protection will help Williams keep the lion’s share of the snaps, and it’s a safe bet that he tops his 13 touches from last week.

It’s not a ceiling game, but we’ll get a top-24 game from at least one of the KC backs, if not from both. Although McCoy is the better runner, bet on Williams to be the more valuable asset based on his higher snap share and passing game utilization.

Mixon comes into the week as the RB29. That’s not what you intended when you acquired his services. He’s probably killing your season.

With a decent showing in week 5- no TDs but over 100 yards combined- we might hope that Mixon’s turning a corner. This week he gets a Baltimore defense that is a far cry from the stay-away matchup of years past, currently tied with the Bengals for the most TDs to backs and yielding the 11th-highest Y/A. It seems like another prime bounce-back spot.

But be cautious. He’s not the worst play- I’m guessing he’s a low-end RB2- but I’ll be surprised if he achieves the RB16 finish at which FantasyPros has him ranked. His 10.9 points from last week are about what he’ll get again in this outing. Baltimore’s offense should rebound from a slower start last week, and that means this game could get out of hand quickly; with Mixon not being highly active in the passing game (3.2 targets/week) he’s likely game-scripted out as Dalton chucks it to catch up.

If you want to offload him in redraft, do it now. He’s a great buy-low in dynasty if you don’t need more than a flex starter from him this year.

I love Gordon. He was- less than ideally- one of my most drafted best-ball players this offseason. When he’s healthy, he’s the focal point of the Chargers offense.

He’s back from his holdout. He’s healthy. But for one last week, this workload split falls in the favor of Ekeler as Gordon works back into the offense. Gordon’s playable- he’s a sit only in as much as I doubt he hits his RB18 rank from FantasyPros- but I’d rather play some guys ranked behind him, such as Breida, Lindsay, or D-Will.

Give him one more week unless you don’t have a better option at RB2.

After a rough sophomore season, Fournette’s having a bounceback, scored as the RB8 in PPR through five weeks. As one of the only true three-down backs in the NFL, he’s largely unbenchable. I’m not sitting Fournette unless I have great options but I am tempering my expectations as he draws a tough matchup this week in the Saints.

Here are the four most recent rushing leaders against New Orleans:

Sean Payton’s defense has stepped up in the absence of Drew Brees, supporting Teddy Bridgewater and keeping their playoff dreams alive. They are still beatable through the air- last week Chris Godwin went 7/125/2, mostly against Eli Apple- but backs have struggled.

Fournette’s nearly doubled his career average in targets/game, and his work in the passing offense maintains his solid floor. He should easily land in the top 24- his 7.2 points in week 1 are his absolute floor- but his RB 9 ranking on FantasyPros is unrealistic.