Week 12- It’s crunchtime for your fantasy season. Don’t miss the playoffs by making a dumb start! Get the skinny here for all your RB start / sit decisions. 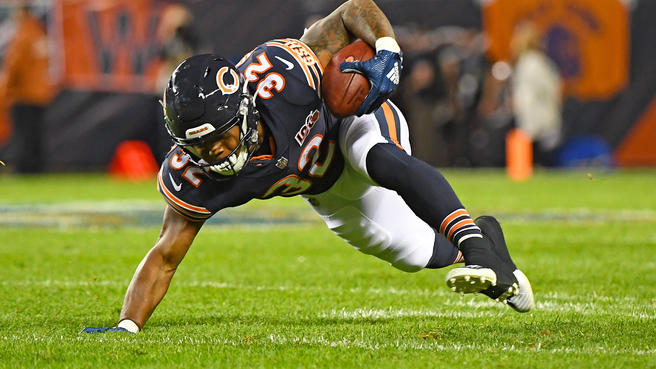 Miami’s been playing much better in recent weeks- Flores is making the best of his b-list personnel- but they’re still a great matchup for backs, allowing the 7th-most PPR points on the season to the position. In five of the last six games they’ve allowed over 100 rushing yards, and three of those were 140+.

Chubb is still the man in Cleveland, but his stranglehold on touches might be waning. Hunt has seen at least eight targets in each game since his return, while Chubb was targeted only once last week (he’s averaged 3.7 targets this season).

In a matchup like this that discussion is merely academic. Chubb should be an easy RB1 play, and Hunt (who has been outscoring Chubb) looks like a solid RB2. If Hunt sees more goal-line work we might have to reconsider their rankings moving forward.

I don’t wish to speak poorly of any NFL player (or human being, really). Least of all the guys that seem like decent dudes. But man, I hope we see Chase Daniels this week. The Bears are better with him on the field. Monty deserves a shot as a lead back while supported by competent quarterback play.

Whether he gets it or not, this is a good matchup for the young runner. The Giants are a bottom-half defense against the run, giving up 25.3 points/week to the position.

They held Lev in check last week but were recently gashed by the Cowboys and even the Cardinals, handing Chase Edmonds his career game of 150 yards & 3 TDs.

If Matt Nagy wants to keep his job he’s going to have to stimulate some production from his offense. The most direct path to that is going to be setting up the pass with the run- namely, with 25+ touches to David Montgomery.

Look for him to break back into RB2 territory this week.

Atlanta has played much better of late. Was it the coaching shuffle, or a shift in the locker room? Who can say? But this version of the Falcons is what many of us expected to see in 2019.

Their rush defense has been up and down all season, but when they’ve been on, they’ve slowed down even good running games. They just held the Saints to 52 yards and the Panthers to 77.

But Quinn’s Achilles’s heel has always been pass-catching backs, and that hasn’t changed. They just gave up 8/50/1 to Kamara and 11/121 to CMC through the air, despite limiting their effectiveness on the ground.

Ronald Jones, has made some improvements, but he still isn’t a great runner. But he’s been effective in the passing game and great with the ball in space. Look for Arians to emulate that usage pattern and target him at least 6-8 times.

The receiving work will help Jones bounce back. He’ll bump back up into the RB2 ranks for week 12.

It’s low hanging fruit to tell you to start a guy that’s been the RB3 over the last 3 games, so consider this a matchup highlight. Derrick Henry has been a superhero over this stretch, hitting a ridiculous 6.3 ypc on 52 carries and scoring four times.

He’s going to keep it rolling this week against Jacksonville. The Jags have been a beatable run defense all year, and last week was especially bad- Marlon Mack went for 100 yards in half the game, and backup Jonathan Williams added another 100 for good measure.

Henry is going to do bad, bad things to the Jags this week. Fire him up in all formats as a locked-in RB1.

Bell’s a talented dude, but he’s slowed down a bit this year, and his supporting cast has robbed him of any real upside. His 3.2 ypc is by far the worst of his career, as is his 15.2 points per game.

His pass-catching ability has helped him maintain a solid floor, but he hasn’t been giving you those week-winning boom games that you’re looking for from a guy drafted as a top-6 back. It’s tough to get in the end zone when your team can’t move the ball.

The Jets host the Raiders, who’ve been a middle-of-the-road matchup for running backs. They’ve held some teams in check but they’ve just given up back-to-back big games to Melvin Gordon and Joe Mixon.

There’s a world where Bell makes it three in a row, but I’m not buying it. He’s dinged up and doesn’t look himself and his target share has gone down since Darnold came back (those Ryan Griffin targets had to come from somewhere). He’s even losing carries to Bilal Powell.

He’ll still get four or five catches, keeping him a middling RB2, but that’s about all you should expect.

I love Singletary. I had the highest hopes for a legit breakout for him this season. He’s been playing well enough- 76 yards last week, 6.1 ypc on the season- and he’s got some metrics that support the idea of an even higher ceiling, like his 30.4% juke rate and his 12.7% breakaway rate.

Denver’s a tough matchup. They held Dalvin Cook to 47 yards last week, his worst total of the season. That was the seventh time this year they held opposing backs under 100 yards rushing.

I think Singletary has a bright future, but this week he’ll struggle to get much going, and he loses upside to Josh Allen’s goal-line heroics. Honestly, the rest of his schedule is pretty rough. He’s likely to be on the RB2/RB3 borderline for the remainder of your fantasy season.