Happy Thanksgiving! Enjoy your family, watch some football, and make the right start/sit decisions to lock in your playoff berth 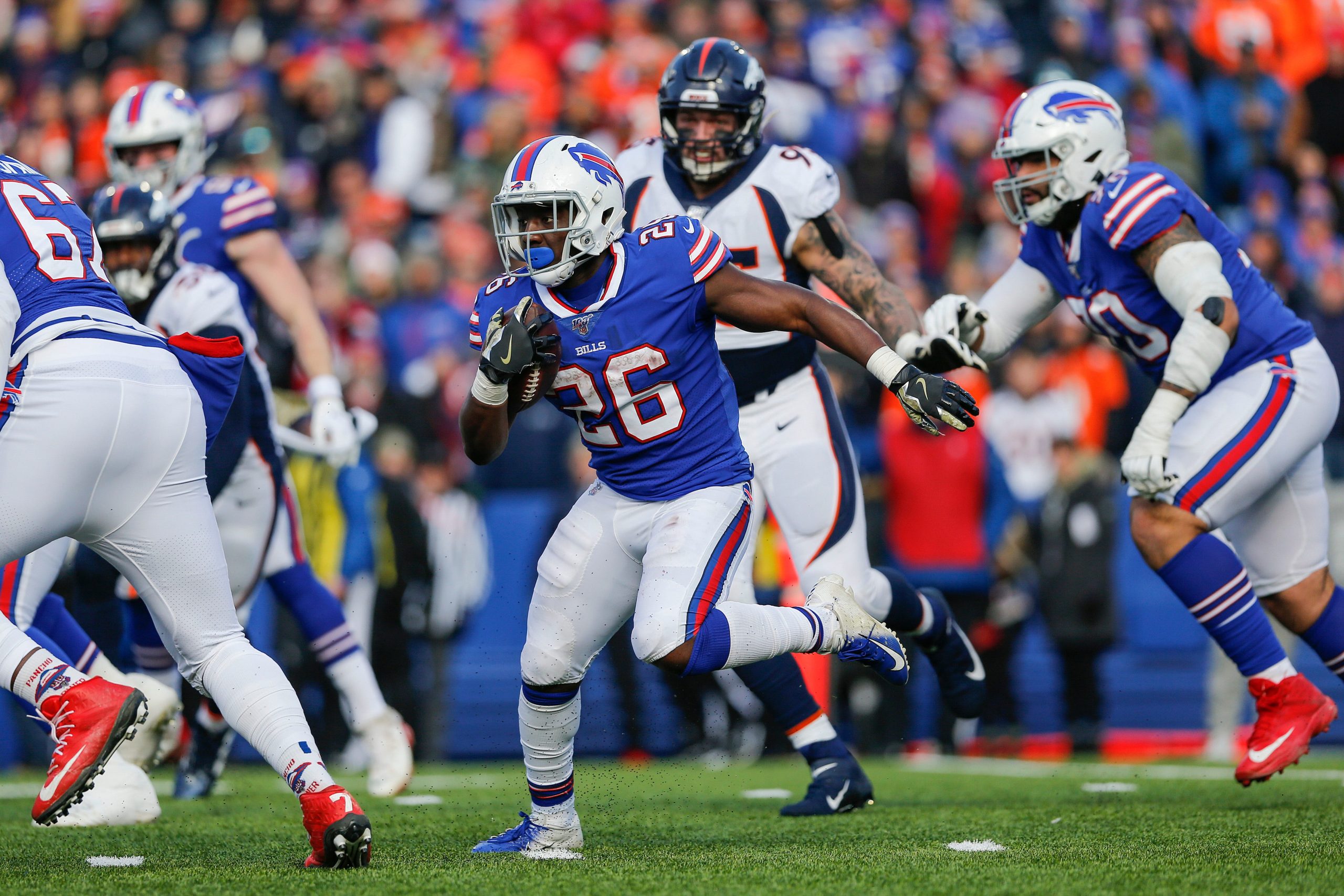 The DynastyNerds writers are here on this holiday to provide you with your weekly starts and sits. We will be making our recommendations based on weekly consensus PPR rankings from FantasyPros. Here are the cast and the position groups they will be covering to help you win your week. Follow us, friend us, stalk us, whatever floats your boat

At this point I should know better than to even bring up Singletary. I start him, he bombs; I fade him, he blows up.

But I can’t stay away!  Last week he ran for 106 yards against a tough Broncos defense. He didn’t even see much work through the air, which is where he’d been doing most of his damage in the first half of the season.

Since week nine he’s averaged 16 carries and 80.3 yards/game. He owns the 4th best juke rate and the second best breakaway rate of any back.

This week he gets a middle-of-the-road matchup against the Dallas Cowboys.  While they’re 15th in points allowed to RBs, the Cowboys allow the 8th most receiving yards to backs. It seems likely that both elite LB Leighton Vander Esch and nose tackle Antwaun Woods miss the game, further softening the matchup for Singletary.

His FantasyPros weekly ranking of RB21 is too low.  He should exceed his 13 projected PPR points.

I’ve been down on Bell. He hasn’t looked himself.  But his floor is to good to sit him, particularly in what seems to be a pretty rough 2019 running back landscape. He’s averaging 5 catches a week. That’s great.

Last week I called him a fade. I also projected his stats within three points.

He wound up the RB9.

Even against Cincinnati I’m not in love with his ceiling, but there’s definitely upside when you’re playing a defense that’s giving up an average of 28.5 DK points to the position.

Bell has been allergic to the end zone this year, but he has a good shot to find it this week. I’m not sure about his FantasyPros RB5 ranking though. That is certainly within the range of outcomes, but it seems optimistic to me.  Still, I’m starting him ahead of most backs.

I started Jones last week against a Falcons team that had been defending the run fairly well.

The thought was that he had seen decent pass-game work and the Falcons give up catches to backs.  He did catch all three of his passes for 16 yards, but he mostly succeeded on the week due to a successful goal-line carry.

That’s actually great news. Peyton Barber had been seeing most of the goal-line work, and that has depressed Jones’s ceiling throughout the season.

This week Jones is in an excellent spot against a Jaguars team that has been getting absolutely gashed on the ground.  The last three teams that played Jacksonville ran for 216 yards or more. That’s ridiculous. Their last two opponents- Indianapolis and Tennessee- have been relatively modest offenses on the year, yet scored 33 and 42 points, respectively.

Suffice to say that I love Ronald Jones this week. His RB24 ranking is far too low.  I get it; his timeshare makes him a bit unpredictable, and Tampa Bay scores lots of touchdowns on long plays through the air, dampening upside for the backs.  But he’s going to rack up some yardage this week and at least a handful of catches, and he has as good a chance as anyone as finding the endzone.

These are not statistics you expected from Todd Gurley.  They’re all career lows, dipping even below his Jeff-Fisher-era sophomore slump.  His eight touchdowns have kept him a solid RB2, but his usage and efficiency have been less-than-ideal; both his juke rate and his yards-created rank outside the top 30.

He gets a good matchup this week against the Arizona Cardinals.  They are a bottom-ten run defense, allowing an average of 26.9 DK points to opposing backs.  The Rams were beat down by Baltimore last week (in gruesome fashion) but, prior to that, Gurley had been trending up, receiving 28 touches and putting up 133 yards and a score against the Bears.

This 2019 Rams team is very different from the explosive unit that made Sean McVay coach of the year, but they’re not as bad as they have been playing. You have to think they will right the ship- at least to some degree- this week.

I like Gurley to find the endzone; I also like him to grab a few catches and gain some decent yardage.  Goff has been bad, and the Cardinals can rush the passer, so McVay should be scripting quick passes to Kupp and Gurley all afternoon. There’s a good shot he exceeds his RB14 ranking.

The Ram’s run defense was absolutely humiliated by Baltimore last week.  The Cardinals aren’t on the same level as the Ravens, but there’s enough similarities to think they’ll still be able to stress Wade Phillips’s defense.

Particularly as some of his players seem pretty tackle-averse:

But seriously, the Kingsbury offense has:

-a talented rushing QB who is an effective passer.

It’s hard to say if the Rams are going to come out fighting or wilt like a bunch of drooping daisies. They’re not out of the wild card race, but they’d essentially need to win out and have the Vikings or Seahawks lose out, and the team we saw Monday certainly didn’t look like a contender.

The stage is set for Drake to succeed.  Since playing for Arizona, he’s averaging 14 carries and 6 targets a game; he’s running for 5 ypc, including a matchup against the tough run defense in Tampa.

There’s a chance that DJ or Edmonds steals work, but I don’t think it’s likely;  I think Drake has a good outing and strengthens his grip on lead back duties.

He’s going over 100 combined yards this week, and likely scores; his RB25 ranking is his floor. It’s more likely he ends up as a high-end RB2- as long as he gets the work.

Jacobs had a rough week 12. The Jets defense held up against the run.  The Jets got way ahead, and he was game-scripted out in favor of Jalen Richard. It’s a bit maddening, as Jacobs showed high-level pass catching ability in college, but that seems to be how Gruden wants to run things.

This week the Raiders gets KC. Giving up 33.2 DK points/game to opposing backs, the Chiefs are the most generous matchup on the year. They seem to have tightened it up a bit but still gave up 222 combined yards to the Chargers backs in week 11 and 225 rushing yards to the Titans in week 10.

There is some danger that the Chiefs get way ahead and Gruden shifts more to Richard, but they’re not slowing Jacobs down when he gets the ball. He’s been nothing short of great; he’s running for 4.8/ carry, is tied for 6th in TDs, and has the 4th most yards created of any back.

Gruden knows this, and he knows his best chance of winning is pound the ball with his talented rookie and keep the ball away from Mahomes. His RB6 ranking seems about right; he should be going for 100 and a TD.

I like Phillip Lindsay. He’s got great movement skills and good vision, but he’s been less effective this year than he was in 2018.

All of his efficiency numbers are down. His y/c has dipped, his juke rate has fallen to just 18.3%, 35th amongst backs, and he’s only notching 2.5 receptions a game.

On the positive side, he has won back the greater share of the workload from Freeman, and there’s a chance that his upside gets a bump with Drew Lock at QB.

There’s also a chance that the Lock-led offense is a complete debacle.

The Broncos are home this week against the Chargers, a team that has generally struggled against the run.  They’ve also had some games where they shut opponents down; it’s tough to say which team shows up.

In any case I’m not sure we can trust anyone in this offense until we see Lock come out and make some plays. They certainly weren’t moving the ball with Brandon Allen, and we can’t know if Lock will be an upgrade until we see it.  There’s a chance that he comes out firing strikes and ignites this offense but there’s an equal chance he turns the ball over four times and kills them.

The last time we saw him play (in preseason) they were dinking-and-dunking down the field and he was running fairly frequently. That could be either good or bad for Lindsay, giving him a boost in targets or taking away rushing opportunities.

I’m going to wait and see on this one. I’m not sitting Lindsay for an RB3 but his RB16 ranking this week doesn’t account for the level of risk inherent for a timeshare back on a bad offense playing with a rookie QB.

Mixon lives! Now that he’s ruined your team and likely kept you from the playoffs Mixon’s turned it on for the stretch run, ranking as the RB15 over the past four weeks. It’s not what you drafted him for, but it’s sure as heck an improvement over the first half of the year.

I doubt that his run of mild success extends to a fifth game. The Jets, as broken a team as they are, have been a decent run defense. They’ve allowed the 3rd-least rushing yards on the year.

Conversely, they’ve allowed the fifth-most receiving yards to backs. If only the Bengals had a back with that skill-set…

Unless Coach Taylor has a had an epiphany over the past few days (or watched any college tape of his lead back) there’s little chance of Mixon blowing up here. I think the Bengals win, but NY’s funnel defense makes it more of an Andy Dalton/Auden Tate game.

FantasyPros has him one spot behind Lindsay at RB17. I’d rather play Rojo, Singletary, or Drake.

It seems like Damien Williams might miss week 12. He didn’t practice Wednesday. He could still turn it around, but seems to be trending towards out.

This leaves McCoy back in charge of the Chief’s backfield, but I’m not enthusiastic to start him. There’s reasons he’d lost the job to Williams; he was banged-up, inefficient, fumbling, and struggling in pass pro.

He’ll likely split time with Darrel Williams and maybe even preseason darling Darwin Thompson, and none of them have been effective.  Last week, when Damien went down, the only Chief to rush for more than 50 yards was Patrick Mahomes.

McCoy’s had some passing floor, and he’ll likely see some goal-line carries, but it’s as likely that Darrell or Darwin have a blow-up game as it is that McCoy does.  For week 13 they get Oakland, a defense which hasn’t been a good matchup for backs, but gives it up in the receiving game.

Put it this way: on the one roster on which I have McCoy, I’m having a hard time deciding whether to start him or Royce Freeman. It’s not great. There’s no way you plug him in and feel good about it.