@EKBaller walks you through the minefield of injuries and bye weeks to get you the RB starts to win. 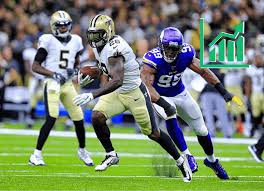 Keep an eye on the injury reports, as Alvin Kamara’s availability will obviously affect Murray’s output against the Cardinals.

But we saw last week what he can do when given the load: 150 yards, 2 TDs and the RB2 weekly finish.

The Cardinals are a bottom-ten defense against the run, allowing 4.7 y/a and at least 100 yards on the ground to every opponent so far this year.

It’s likely that even if Kamara does come back they will limit his workload against a beatable opponent and Murray has value as a flex or even a low end RB2, depending on how the game script flows.

FantasyPros consensus right now has him at RB 15, which seems like it’s splitting the difference between Kamara playing and Kamara being out.

If Murray gets the load to himself he’ll be an easy RB1.

Last week I told you to sit the Green Bay Packers backs until we got some clarity. That was a reaction to Jones being outplayed by Jamaal Williams and essentially benched.

That was bad, reactionary advice. Jones responded to his down game by scoring a touchdown to go along with about 70 yards against Oakland.

Look, this is the life of being an Aaron Jones owner in fantasy football: the timeshare is not going away, it’s going to be a hot hand approach, and there’s going to be weeks where he disappears. But there’s going to be other weeks that he’s just fine and finds the end zone, and those are going to come more often than not. He’s an RB2 with a shaky floor but RB1 overall upside.

This week the Packers get Kansas City. KC’s been a top-three matchup for backs this year, allowing 5 y/a and giving up over 1000 rushing yards already on the year.

It’s set up to be another good game for Jones. The worst a starting RB has fared against KC so far has been 9.9 points- and that was Josh Jacobs with a 99 yard, 0 catch game.

FantasyPros has Jones as a top-ten start at RB9, a finish which he could easily surpass if his TD spree continues.

I don’t think that Melvin Gordon is bad, and I’m sure he’ll have some good games. But with the ongoing offensive line woes of LA (Okung comes back,Lamp goes out) there’s not going to be any push to open holes. Gordon’s getting .6 yards before contact and 1.6 after. He’s gotten 2.3 yards per target since returning.

I don’t see this o-line getting better this year. Philip Rivers is going to have to continue to get the ball out quickly, and Ekeler has been infinitely better than Gordon in the passing game.

FantasyPros has Ekeler at RB18 this week against Chicago. Chicago was a severe stay away matchup for the beginning of this season, but, since losing Akeem Hicks to IR a few weeks back, hasn’t been the same team. They’ve become beatable on the ground.

Let’s be clear: I’m not loving Freeman this year. He’s lost a step, or two. He’s still a great pass-catcher though, and this Atlanta defense isn’t slowing down Seattle at all, so that’s likely more important.

While Brian Hill will certainly slot in for the concussed Ito Smith,  I still expect a volume bump for Freeman. And now Mohammed Sanu is gone, traded to the Pats; while Calvin Ridley will be the largest beneficiary of the trade, some extra targets should trickle down to the backs as well.

Matt Ryan’s ankle is dinged; it’s been said to be similar to the ankle injury through which Mahomes had been playing for the last few weeks. One would think that he’s going to want to get rid of the ball a bit more quickly, which would favor Freeman even more.

The ‘Hawks have been a bottom-ten defense in terms of y/a allowed and are tied for the 2nd-most TDs allowed on the ground.  FS Bradley Mcdougald and DE Ezekiel Ansah are questionable for the Seahawks; if either misses it would help boost Atlanta’s offense.

The Falcons have to step it up after last week’s embarrassing loss to an underperforming Rams team, right?  It’s clear at this point they’re playing for Dan Quinn’s job; maybe Julio’s rousing speech to the locker room will spark a fire.

FantasyPros ranking of RB16 feels about right this week.  Start Freeman as a low-to-midrange RB2 with a solid floor in the passing game

This take goes against everything I’ve been saying for weeks, but I think you can finally start a running back on the Kansas City Chiefs with some confidence. Damien Williams has been phased out except for goal line work. Darrel Williams is getting some passing game work, but only a couple touches a game.

It seems like it’s the Shady show in KC, for now, through it’s tough to trust Andy Reid this year.

This week, at home, he gets a Green Bay defense that’s been exploited by good running teams. I’m not sure if the 2019 Chiefs qualifies as that, but there’s a reasonable expectation they lean a little more heavily on the run this week without Patrick Mahomes, and the Packers were just gashed to the tune of 134 yards by Josh Jacobs. McCoy’s not going to see the 24 touches that Jacobs got, but I do expect a bump up from his typical 10-12 touches, and I do expect him to be productive.

Packers starters Darnell Savage and Kenny Clark are also both Q for the game after week 7 injuries. If they miss that will further improve his outlook.

I don’t expect him to be a world beater, but you can plug in Shady this week as a solid RB2 with upside.

For fantasy managers that took him at the round 1 / 2 turn Conner has been a  disappointment. 25 catches and 5 total TDs has kept him in RB2 territory, but 57% of that production came in just two games.

While he’s not matchup-proof, he can still smash for you in the right spot.

This week is such a spot. The Dolphins give up the second-most yardage to backs.  Pittsburgh’s defense is playing at an elite level. They will keep Miami’s offense off the field and keep the ball in Connor’s hands.

FantasyPros consensus has him ranked at number four overall. While he’s a start for me- get him in there- that feels a little aggressive. I think Benny Snell is going to take some snaps as well.  Still, Connor should easily finish as an RB1, probably in the middle of that range.

The Patriots defense is better.

The best finishes from any backs against New England this year have been 10.9 and 10.8 points. They’ve allowed 3 offensive TDs and just 88 first downs through seven games.

Nick Chubb, Baker Mayfield, and Freddie Kitchens are in for a rough week.

Chubb’s FantasyPros ranking of 11 is unrealistic. He’ll be lucky to finish as an RB2.

After Edmomds’s ridiculous dominance against the Giants this past week it’s starting to smell a bit like a timeshare in Arizona. Kliff Kingsbury has been doing interesting things in the run game and targeting the backs heavily, but a true timeshare will dampen the fantasy value here.

They get New Orleans this week. After a slow start, the Saints defense has held their last four opponents to 260 or fewer total yards.

Noone outside the Cardinals staff is sure exactly how healthy DJ is or how this workload shakes out but it looks like this is a definite fade here for both players.

FantasyPros has the backs ranked at RB23 and RB27 (with Edmonds higher) and that seems about right.

I more or less covered this above, but Gordon’s been flat out bad since returning from his holdout, and the line there isn’t helping him. 2.8 ypc, 3.8 ypr, .38 yards created per attempt (82nd in the league).

This isn’t even a bad matchup, but I want nothing to do with Gordon until something changes for him.

His FantasyPros ranking of RB19 seems ridiculous. I wouldn’t play him as an RB2 this week.

Relevant injuries to be aware of: