The Cutback: Running Back Start/Sit Week 15

Week 15 is here, and @GBridgfordnfl is back to provide you with your weekly starts and sits, and we’re here to talk running backs. 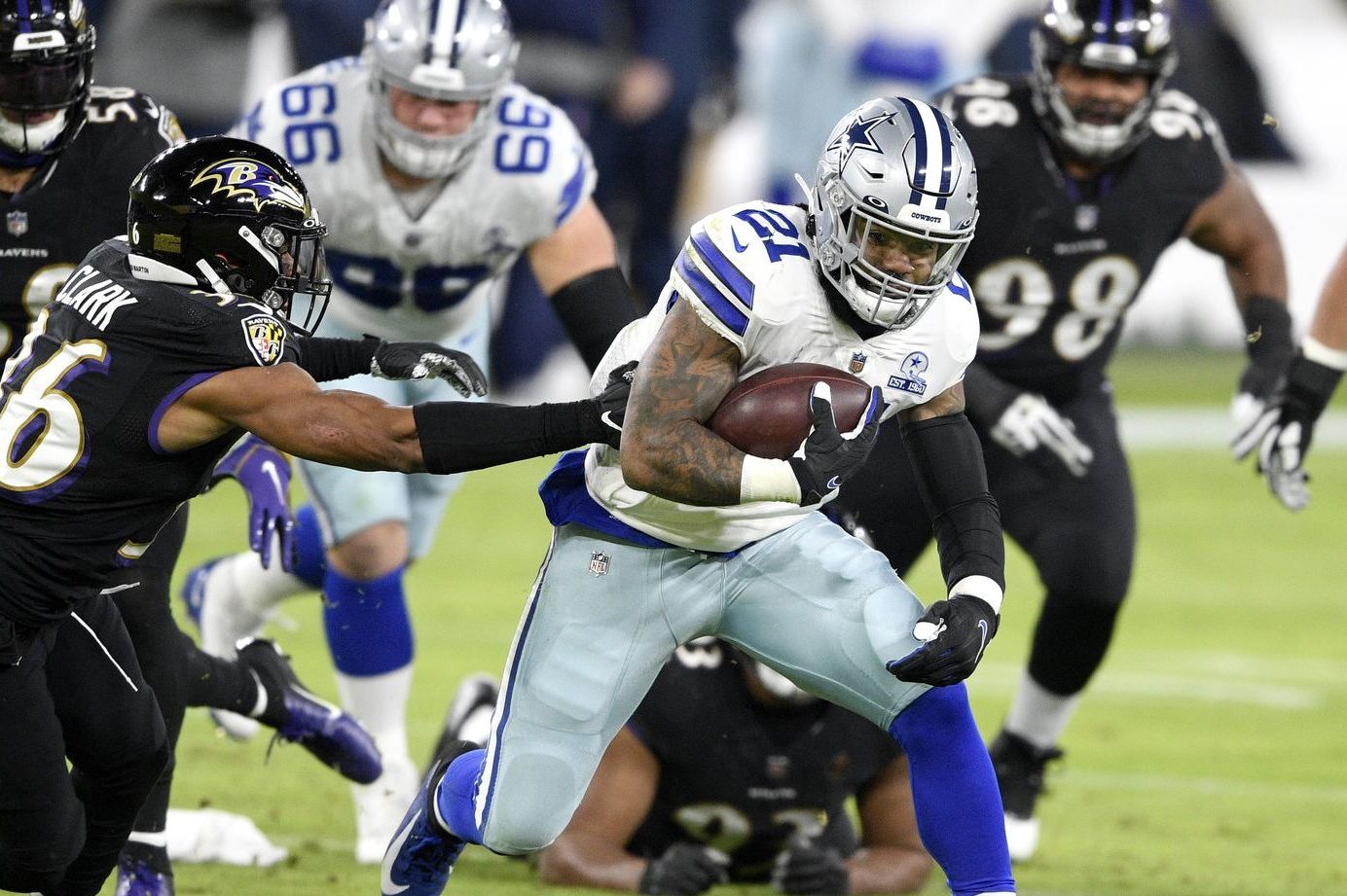 Welcome Back! Week 14 is here, and the DynastyNerds writers are back once again to provide you with your weekly starts and sits. We will be making our recommendations based on weekly consensus PPR rankings from FantasyPros. Here are the cast and the position groups they will be covering to help you win your week. Follow their socials, and be sure to check out their picks for this week as well.

Well, this week was pretty interesting. One-third of our calls were voided. After I wrote this, the unstoppable wonder that is Frank Gore cleared the concussion protocol and was activated, which shut down Ty Johnson. This one was pretty bad. After an early fumble, for the first time in over six years and 800 touches, Giovani Bernard was pulled for the majority of the game. J.K. Dobbins rounds out our day with a hit. It took a late touchdown to push them over the top, but we’ll take it.

Wow, this one was a bad beat. McKissic finished in the RB2 category by just 0.2 points. Good on McKissic, and he’s probably going to be an RB2 again this week. It took an injury, but we got the Mostert pick correct this week. Teammate Jeffrey Wilson Jr. got the touchdown that would have pushed him into that upper tier. Johnson was our second void of the week. When we wrote it, he was going to play. Teammate Duke Johnson Jr. finished as an RB3 on the week.

Teammate Antonio Gibson (toe) missed practice on Wednesday, and it’s unlikely that he’s going to play this week against the Seattle Seahawks. As a result, the primary running back is going to be McKissic again, and he should have plenty of opportunities to put up a solid fantasy outing against the Seahawks, who are allowing a little over 18 fantasy points per game to opposing running backs.

McKissic saw just four targets in the team’s win over the San Francisco 49ers, but he made up for that with a season-high 11 carries. It was the first time he had seen double-digit carries all year, and it was the fifth time in 13 games that he had received double-digit touches. He’s averaging over 15 PPR points per game in those five games, and he’s doing it without relying on touchdowns, as he has just one total score on the season.

The Seahawks are tied for the fourth-worst mark in the NFL with 77 receptions allowed to the running back position on 95 targets. This Seahawks’ offense can put up points when they are firing on all cylinders, and Washington will be forced to throw as a result. When that happens, McKissic will be heading towards a solid fantasy outing.

Did you guys see Hunt put on a show against the Baltimore Ravens on Monday night? Guess what. He’s going to have an even better opportunity for success against the New York Giants in Week 15. Hunt is a mismatch for the majority of NFL linebackers, and he’s going to be able to run circles around this Giants’ group. He may not get a touchdown to really elevate his day, but he’ll have an extremely safe floor thanks to his receiving work.

For his career, Hunt has proven that he doesn’t need a ton of volume to have a great day. However, when you give him a little bit of receiving work, he can make some great plays with it. Since arriving in Cleveland, he’s had five games where he’s seen at least five receptions. In those five games, he’s averaging 17.66 PPR points per game. Even in the other 16, he’s still averaging nearly 13 per outing. That’s a great floor with a solid ceiling.

The Giants have allowed the second-most receiving yards to running backs along with the third-most receptions. Linebacker Blake Martinez was an upgrade for them this year, but he’s still not a great coverage player. The Browns will likely give a heavy dose of their running backs in this game, and while Nick Chubb will be a strong play, as usual, Hunt is also in a good spot this week.

Like a couple of our plays last week, we’re going off of the idea that Raheem Mostert (hamstring) will miss this game. If that were to happen, Wilson will be an absolute smash play against one of the league’s worst defenses in the Dallas Cowboys. Due to some of the regression we’ve seen from quarterback Nick Mullens, the 49ers will likely look to take some of the pressure off of him.

In his brief career, it’s not taken much for Wilson to have fantasy relevance. In the eight games where he’s seen at least 10 rushing attempts, he’s averaging over 15 fantasy points per game compared to fewer than four in the other 14 games. The rest of the backfield remains a clouded mystery, but it’s clear Wilson is going to be the leading man, as he played just one fewer snap than Mostert in Week 14.

As previously stated, the Cowboys have one of the worst rushing defenses in football. They’re allowing the sixth-most points to the running back position this season at 21 points per game to the position. They’re tied for fourth in rushing touchdowns allowed to the position with 13, which is an average of one per game. Additionally, their 1727 rushing yards allowed are second in the NFL.

After being a workhorse for the first couple of months of the season, Conner has been trending downwards of late for a few reasons. For one, he’s been dealing with a nagging injury for the last month. On top of that, this team’s rushing offense has been struggling as of late, making his life more difficult. They also have four or five outstanding pass-catching options, giving the team greater flexibility in playcalling.

Conner has gotten the majority of the touches, but, looking back in his young career, we can see a troubling trend in his game splits. In the 30 games where he has failed to score a rushing touchdown, his PPR points per game head into the tank. He’s averaging just 7.18 PPR per game in those outings. For all of their struggles this season, the Bengals haven’t been super forgiving to opposing running backs.

The Bengals are tied for sixth in the NFL in rushing touchdowns allowed this year, as they’ve given up just seven on the year. They’re also tied for second in receptions allowed to the position with just 50 while allowing the fifth-fewest yards to the position. With Conner dealing with an injury and the team having a matchup advantage with their pass catchers, there is a strong case for fading him.

How the mighty have fallen. These final two running backs were expected to buoy your team on your quest for a fantasy title. Using ADP from the month prior to the start of the season, Edwards-Helaire was being drafted, on average, with the 2.02 pick in 10-team formats. Some people took him in the first round despite never seeing him play a snap of NFL football. Now? We’re in Week 15, and you’re scrambling to find a replacement to play over him.

For starters, he has just two games this year with at least 100 rushing yards. In those two games, he averages over 20 PPR points per game. In the other ten outings, he’s averaging just 12.6 per game. While that could put him into the RB2 category, you can probably find other solutions to fill in for him during this particularly difficult matchup.

Before Miles Sanders’ big game for the Philadelphia Eagles in Week 14, the New Orleans Saints hadn’t allowed a 100-yard rusher in three years. If it weren’t for a broken 80-yard run, that streak likely would have continued. This front is fierce, and the Chiefs are having no issues moving the ball through the air. Until Clyde’s efficiency changes, you should be scouring for other players to go in your running back spots.

I said the mighty have fallen, and that remains true on this one. Elliott was one of the most rock-solid starters for fantasy since he entered the NFL, but due to an anemic offense that has been demolished by injuries, he has lost all of the trust that we had placed in him over the last five years.

Dak Prescott had yet to miss a game in his career before this season. However, Zeke has played in the eight games since Prescot went down with an injury, his average points per game have been cut in half. He’s averaging just 10.62 points per game over his last eight. He’s also failed to score a rushing touchdown over that stretch. This is a dark time for the former Ohio State Buckeye.

The 49ers have the fifth-fewest yards allowed on the ground to running backs this season. They’re also finally partially healthy after getting attacked with injuries earlier in the season. They’re allowing the sixth-fewest PPR points to the running back position at just 15.1 per game. With teammate Tony Pollard getting some touches to decrease Elliott’s workload, his outlook is rather grim for Week 15.