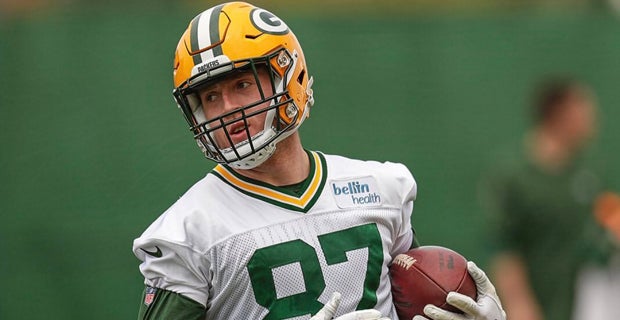 The 2019 Draft Class came loaded with talent, and one of the more underappreciated positions was at TE. TJ Hockenson and Noah Fant are considered #1 and #2 going in the late 1st round or early 2nd in rookie drafts; Irv Smith is taken in the early to mid 2nd—but there’s a TE that’s being pushed down draft boards, available at a consensus #29 overall: Jace Sternberger.

The Packers‘ Tight End room is currently crowded and it’s hard to predict who will play the majority of the snaps outside of starter Jimmy Graham for 2019. But Marcedes Lewis‘s contract is up at the end of the season, and it’s no guarantee that Graham will be back in 2020 either—the Packers have an out in his contract that would save the team $8M.

Taking a look into the TE’s situation: Jace Sternberger will be paired with Aaron Rodgers and first-year Head Coach Matt LaFleur. LaFleur comes from the Mike Shanahan coaching tree, notably serving under Gary Kubiak in Houston (2008), Mike Shanahan in Washington (2010-13), Kyle Shanahan in Atlanta (2015-16) and Sean McVay in LA (2017).

These four offensive-minded coaches have leaned on the tight end position in their philosophies—with LaFleur on staff, with roughly 23% of targets heading to the teams’ TEs.

While LaFleur produced the 25th-ranked offense in 2018 with the Titans, it shouldn’t dissuade you from the Packers offense. Rodgers has produced 5 TE1 seasons—the best being in 2011 with Jermichael Finley finishing as the TE5. That number may be surprisingly low, but remember that Mike McCarthy loved running with two Tight Ends—targets are split up between them. His four most recent seasons have been pulled for clarity on the position.

One thing we do know is the door is wide open—and it’s in the middle of the field.

After Davante Adams and Marquez Valdez-Scantling slated in the WR1 and WR2 positions (as of 7/30/19), the departure of Randall Cobb and no real Wide Receiver threatening the slot—yes, that includes Geronimo Allison—the middle of the field will be left to the Running Backs and Tight Ends. That’s where Jace Sternberger made his mark at Texas A&M. Against mainly SEC-competition and the eventual champion Clemson Tigers, the  6’4”, 250 pounder led the team with 48 receptions and 10 TDs while producing 17.3 yards per reception—good for AP, The Sporting News and Walter Football 1st-team All-American honors.

Numbers are one thing, but Sternberger also passes the “eye-test.” He’s a willing blocker that can use his leverage extremely well, and his NFL ceiling will be closely tied to this area as it will allow him to see the field more often.

The reports of his route running are consistent among the professional scouting community, labeling him similar to “a big receiver” with “route savvy” and “above-average hands.” While his savvy will certainly help, he does lack some of the more detailed points and nuances—as would any rookie pass-catcher—but Rodgers is a good teacher for this exact issue. Jace will high-point the ball extremely effectively and offers tremendous YAC ability as he plays much faster than his 4.75 40 would suggest. Coaches also speak highly of his work ethic, demeanor, and conditioning habits. And coincidentally enough, his measurables compare very favorably to former LaFleur-coached Tight End Owen Daniels.

Now, scouting reports aren’t the end-all and be-all to a player’s success, but between his build and buzz, along with the situation, allows for the Jace Sternberger as a future high-end Tight End 1 hype to build—and he’ll certainly end up there barring injury.

Down and Dynasty: AFC East
The Hype Train: Jakobi Meyers