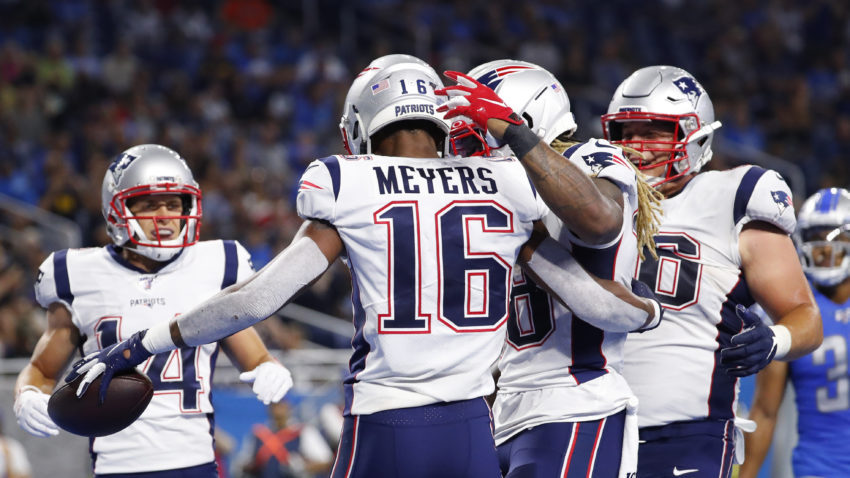 The Patriots’ offensive turnover this year has been well documented. With Gronk, Hogan, and Cordarrelle all out of town, along with Josh Gordon’s status up in the air, the Patriots have the highest percentage of WR vacated targets in the NFL from 2018 (64%). For the record, the next highest were the Jets at 40%.

As such, we’ve been closely monitoring the situation to identify who may step up for Belichik and Brady. The first-round selection of N’Keal Harry was an obvious candidate, along with the addition of Mau Harris who was added in free agency.

However, over the last few weeks, an unexpected candidate has emerged….Jakobi Meyers. For the last few weeks now, Meyers has been highly touted in Pats’ camp. On August 5th, Greg Badard reported that the 6’2”, 203-pound UDFA WR had become Brady’s favorite target in camp. NFL.com’s Michael Giardi also reported that Meyers was consistently outplaying N’Keal and constantly making big plays in 11-on-11 scrimmages.

Usually, this chatter is dismissed as “coach speak” and not given an abundance of credit. Rookies are frequently talked-up during camp, however, translating to actual game performance is a whole other step. On August 8th, Meyers did just that. With one of the most impressive pre-season performances so far, Meyers caught 6 of 8 targets for 69 yards and 2 TDs in the Patriots preseason opener. He looked impressive running after the catch and displayed good hands and routes all night.

Now, it’s still not a lock for him to rise up the depth chart and make the roster but is certainly worth monitoring. We saw a similar pre-season hype/performance combination last off-season from Phillip Lindsay, which led to Lindsay becoming a valuable asset.

In many leagues, particularly deeper leagues, I suspect lots of owners rushed to waivers to snatch up Meyers. There are very few leagues of mine where he is still available. However, perhaps you weren’t aware of Meyers’ history up until this point….

The UDFA from N.C. State initially enrolled as a Quarterback before converting to Wideout. Meyers then became a starting WR opposite fellow draft class WR, Kelvin Harmon. It was a slow start for Meyers in his first season in the new position with only 13 receptions in 2016. However, the Redshirt Junior really stepped up his game in 2018 becoming one of Ryan Finley’s favorite targets, on his way to becoming first-team all-conference in the ACC. A breakdown of his college stats can be seen below:

Unfortunately for Meyers, he had a sub-par combine (much like that of Kelvin Harmon), which many believe caused his draft stock to decline out of fear that there could be separation issues at the next level. He posted a 22nd percentile 40-yard dash, a 36th percentile speed score, and a 41st percentile agility score. Those factors, combined with a 43rd percentile breakout age, don’t bode well for Meyers.

However, as a free asset in most leagues, it’s worth taking a flyer on a guy that has seemingly earned the trust of Tom and Bill. Meyers was predominantly a slot WR in college, so perhaps they envision a world where Harry and Harris can play on the outside with Edelman roaming, whilst Meyers can operate as a slot/seam target to replace some of the work Gronk used to absorb. If Meyers continue to produce at a high level throughout the preseason, then he’s bound to land on the 53.

The Future of the 2019 Draft Class: The TE1
Seeking Employment: Damion Willis