The Javonte Williams Take Over of the Broncos

@tweetsbychad analyzes Javonte Williams and his new landing spot in Denver. See what he thinks about Williams role this year and beyond! 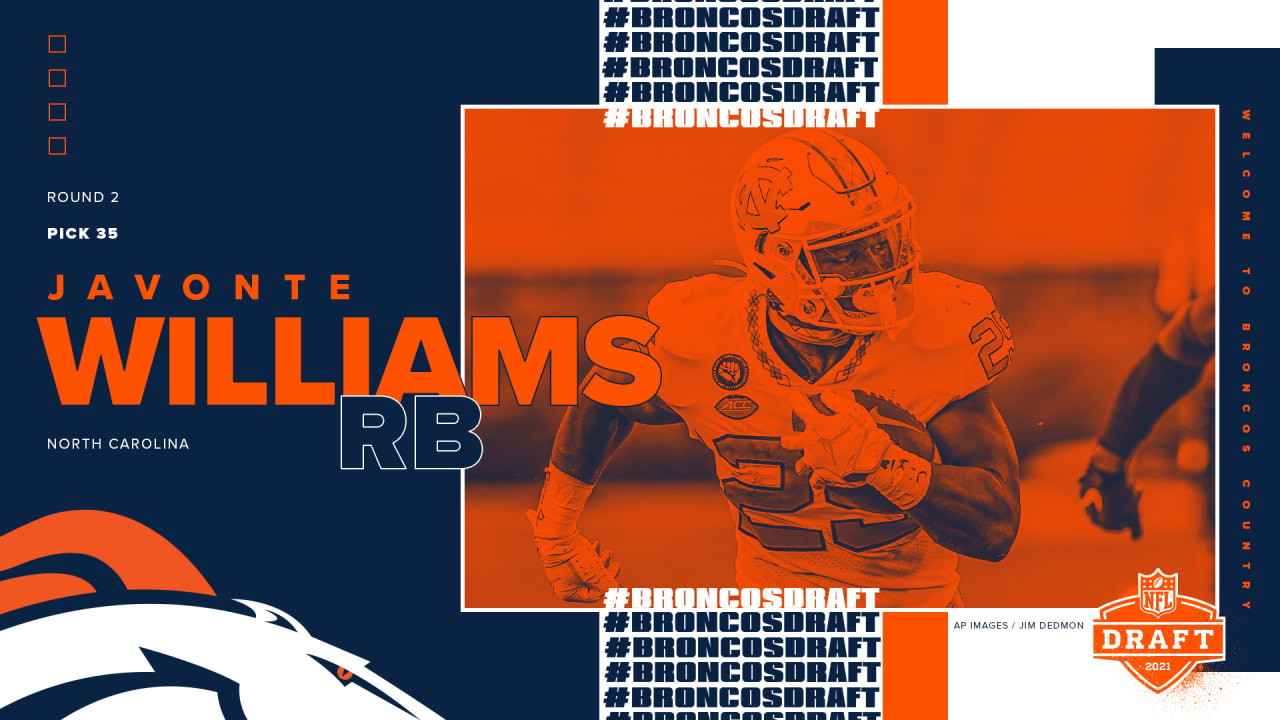 Look, first-round rookie running back Najee Harris is a terrific running back. I’m not here to debate that with you. Even RB Travis Etienne has his strengths, as do countless other backs taken in the NFL Draft. However, my number one RB is and has always been Javonte Williams.

I’m here to answer the question you’ve undoubtedly asked yourself numerous times since the Broncos selected Williams with the 35th overall pick. When will he take hold of the Broncos backfield? Spoiler alert: It may be sooner than you think.

Unlike Harris, Williams will not be walking into an immediate workhorse role as Melvin Gordon remains in Denver for now. Although, they would save about $2.5 million by cutting Gordon. The Broncos could still go that route or look to trade the veteran soon. While I think that outcome’s unlikely, it’s still a possibility.

Gordon posted a solid season in 2020 for the Broncos. He totaled 986 yards and 9 TDs on the ground, adding 158 receiving yards and 1 TD through the air.

Who is the Next Phillip Lindsay? While he was the definitive lead back, Gordon shared many touches with Phillip Lindsay. Lindsay rushed 118 times compared to Gordon’s 215 attempts. His touches came in only 11 games while Gordon played in 15, the second-most of his career. It’s noteworthy to add that Gordon’s only played in 12 games twice in his career.

Lindsay averaged 10.7 carries per game in 2020 and was en route to 172 rushing attempts if he played an entire 16 game season. With all due respect to the undrafted pro bowler, we can all agree that Williams is superior to Lindsay. Had Lindsay played an entire season, Gordon’s 14.7 rush attempts per game (215 total) certainly would have come down a bit, and the Broncos backfield would have been more of a 60-40 split.

In total, Broncos running backs carried the ball 372 times last season, eclipsing the league average of 350 by a wide margin. With a stronger defense and questionable quarterback play heading into 2021 (pending an Aaron Rodgers pursuit), Denver’s destined to run the ball just as much.

With 17 games now on the schedule, my projections have the Broncos running backs carrying the ball over 400 times. RB Mike Boone and others will pick up the scraps after Gordon and Williams are steering towards 175+ rushing attempts.

Williams isn’t a stranger to sharing touches. He was part of a tandem for North Carolina that featured RB Michael Carter, the New York Jets’ eventual fourth-round pick in the 2021 NFL Draft.

Williams saw 157 carries last season to Carter’s 156, and they each snagged 25 receptions. The split was almost exactly 50-50 in touches. He rushed for 1140 yards, notched 305 yards through the air with 22 all-purpose TDs. Williams proved he could be effective in that role and provide efficiency.

What stands out most in Williams’ game is his contact balance and low pad level, as seen below. He’ll run through or around defenders. He initiates contact and either bounce off defenders or fall forward for extra yardage. He’s a rigid, physical back who never missed a game in college due to injury and still has plenty of tread on the tires.

Williams has the tools to excel in short-yardage, evidenced by his 19 rushing TDs last season. However, this doesn’t mean Williams isn’t an outstanding receiver out of the backfield because he is.

Carter overshadowed him in this area, so it’s easy to overlook, but Williams isn’t a slouch as a pass-catcher. In addition, he’s solid in pass protection, meaning that he profiles as an every-down back and can be used in any situation the Broncos want to put him in.

We saw a blueprint for rookie running backs last season, with the likes of J.K. Dobbins, D’Andre Swift, and Cam Akers surging late in the season. While I can see a similar path for Williams, he should make an immediate impact. With Lindsay’s 10.7 rushing attempts per game up for grabs, I expect Williams to see that work immediately. Plus, Williams is a better pass catcher and blocker than Lindsay, so he’ll likely see more than the 1.3 targets per game Lindsay saw. Expect Williams to see at least 2-3 targets per contest.

The Broncos face many formidable opponents through the first half of their season. However, after coming back from their Week 11 bye, the team will face the Chargers and Chiefs twice, and the Lions, Raiders, and Bengals once. These teams finished in the bottom half of run defenses in 2020, with the Lions and Bengals in the bottom five. Predicting run defenses year over year isn’t a perfect science as things change, but that’ll be a prime spot for a late-season breakout.

Putting A Bow On It

Gordon’s a fine back but has been better in our imaginations than in reality. With his contract expiring at the end of the season, it makes sense for the Broncos to turn their backfield over to Williams late in the season, if not earlier, before he becomes a true workhorse in his second season.

My final projections have Williams finishing with just over 800 yards rushing and 4 TDs, to go with 150 receiving yards and a score. After that, it’s only a matter of time until Gordon rides off into the Bronco orange sunset and Williams becomes an RB1 in 2022.