The Lingering Question: When Christian McCaffery Returns, What Will Happen to Mike Davis?

@DynastyWildcat explores the possibility of RB Mike Davis having an increased role when RB Christian McCaffery returns from his short stint on IR and what opportunities lie ahead in the offseason. 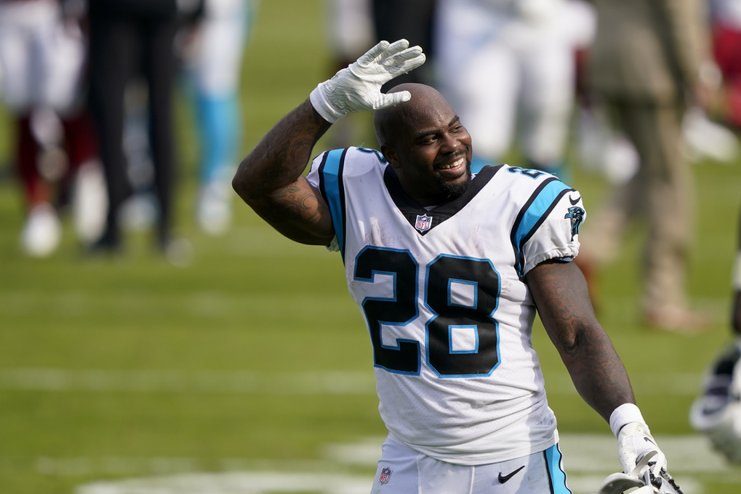 We’re just two short weeks removed from Carolina Panthers RB Christian McCaffery’s high ankle sprain. While it has been a devastating time for McCaffery’s fantasy owners, the Panthers seem to be doing alright in his absence. That’s thanks in no small part to RB Mike Davis’s reincarnation.

Since McCaffery’s absence, Davis has absorbed an abundance of carries and receptions alike. When McCaffery went down at the end of week two, when the Panthers played the Tampa Bay Buccaneers, Davis stepped in and recorded eight receptions off eight targets. Just in case you struggle with math as much as I do, that’s a 100% catch rate. It didn’t stop there, though. For the past two weeks that McCaffery has been on IR, Davis has caught 13 receptions off 15 targets for 72 receiving yards and a TD. He has also accumulated 130 rushing yards on 29 attempts with a TD.

All-in-all, he’s filled in more than admirably for McCaffery, but one question remains. Given Davis’s efficiency level and how good he’s looked, could he have a role rest of season, even when McCaffery returns? It may seem crazy to some, but the possibility is out there. Please don’t hear what I’m not saying, McCaffery, is the best RB in all of football. However, the way Davis is playing, he’s giving HC Matt Rhule something to think about when McCaffery returns.

The Reality of High Ankle Sprain’s

High ankle sprains aren’t a joking matter. They limit a player’s burst and athleticism while taking weeks, even months, to heal. When a player’s inserted into the lineup after an absence from this injury, they often don’t return to themselves for a long time. We saw this story play out last year with New Orleans Saints RB Alvin Kamara and New York Giants RB Saquon Barkley.

In week six of the 2019 NFL season, Kamara suffered a high ankle sprain. It kept him on the sidelines for three weeks. When he returned, Kamara never seemed like himself. His explosiveness disappeared, and he no longer evaded tacklers at will.

There’s no better point to showcase that then with his 5.3 yards per reception (Y/R) from week ten on. During that eight-game stretch, Kamara only exceeded seven Y/R one time. That one time happened in week 17. That’s incredibly unlike Kamara. In 2018, he averaged 8.7 Y/R and ten such games, were he topped Y/R. Four of those ten games feature a double-digit Y/R. During the first six games of 2019, he once again averaged over eight Y/R.

Last year, Barkley also had a high ankle sprain. His occurred in week three as opposed to week 6, like Kamara. When he returned in week seven, he looked like a shell of himself after missing three games. It took him six weeks too finally eclipse four yards per carry. However, he did produce in the passing game when he returned but had two occurrences where he averaged less than a yard per reception. Those were career lows for Barkley as he had never done that before.

With the way Davis has been balling out, combined with what we know about high ankle sprains, I wouldn’t be surprised to see McCaffery eased back into the lineup. That could mean he’ll miss more than three games and recover a little longer as opposed to what Kamara and Barkley experienced. On the other hand, it could mean he returns after three missed games and has a limited role. That, of course, would make a world of difference in Davis’s value. Regardless of which solution occurs, I think Davis will have some flex appeal for your fantasy rosters season long in the right matchup.

If you do wind up acquiring Davis, or if you already own him, the future is a little unclear. He is an unrestricted free agent after this year and has never been given a real opportunity. If he continues to perform in McCaffery’s absence, the Panthers or another team likely tries to sign him as a backup. However, there’s a world where he could get a decent-sized contract and head into the 2021 season, a key piece in a backfield.

The Talent is There. He Just Needs the Opportunity!

When given the opportunity, Davis has always shown potential. Whether that’s this year with the Panthers, or in 2018 with the Seattle Seahawks. That year with the Seahawks, he averaged 4.6 yards per carry and had 6.3 Y/R on 146 combined touches. Now that he’s demonstrating his talent once again in a completely different scheme, we may see Davis contribute heavily to a backfield in 2021.

Throughout his entire NFL career and his collegiate career, one thing has remained constant: pass-catching. In his last two years at the University of South Carolina, Davis caught 66 passes. That skill has only improved at the NFL level. Since 2017 (his third year in the NFL), Davis has caught over 80% of his passes. Not only has he caught almost everything thrown his way, but he’s done something with it in his hands as he’s averaging 6.6 Y/R. The best way to get on the field and prove your worth in the NFL is by becoming elite at any one trait. During his short career in the NFL, Davis has done just that with his pass-catching ability.

I find it incredibly unlikely Davis gets a contract in the offseason and enters the offseason in 2021 as ‘THE’ guy in a backfield. However, he will get paid to come in and be a specialist. So many teams are searching for an RB that can not only pass protect but someone who can come in and catch passes reliably—all the while being able to take a handoff and get a decent amount of yards. That is Mike Davis to a tee.

A team/organization that strikes me as a perfect fit for what Davis provides is the Atlanta Falcons. Since the 2016 season, where RB’s DeVonta Freeman and Tevin Coleman contributed over 80 receptions and 800 yards receiving, they’ve struggled to get that same kind of impact and explosiveness in the passing game. Plus, with RB Todd Gurley looking over the hill, Davis can add in some carries to mix in with Gurley. That’s the type of situation I envision Mike Davis involved in, in 2021.

If you’re a contending team, who has recently lost someone like RB Austin Ekeler or RB Nick Chubb over the weekend, try and target Davis. He can provide you some much-needed depth, with flex upside, even when McCaffery is plugged back into the lineup. However, I wouldn’t give up anything more than a middling, young WR like Parris Campbell, Curtis Samuel, or Anthony Miller. I also wouldn’t mind trying to acquire him with a 2021 second. Any of these pieces will more than likely get the job done if you’re a contender. With the increased likelihood of him being more involved than initially thought and the probability of him being in a situation like that mentioned above, Davis’s acquisition is a must for your contending rosters.