Antonio Gandy Golden has all the makings of a 2nd Kenny Golladay! Check out @dynastyJon’s latest article on the Liberty WR rising up draft boards! #Liberty #AGG #NFLDraft 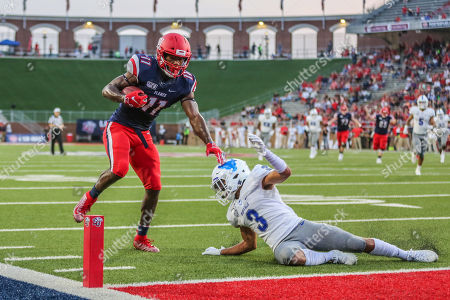 Back in 2016, the Lions drafted Kenny Golladay out of relatively small school, Northern Illinois. During his time there he put up record-setting numbers, followed by impressive combine numbers for someone that’s 6’4”, 215-pounds. I’m suddenly getting a very similar vibe for Liberty’s Antonio Gandy-Golden.

AGG burst on to the scene in his Junior season in 2018, reeling in 71 receptions for 1,037 yards, and 10 TDs. He did it in style demonstrating a plethora of elite traits that will give him immediate highlight reel potential at the next level.

AGG has an ‘above the rim’ style where he frequently uses his monstrous physique to both box-out defenders and high point the ball to “Moss” them.

You can see here how the 6’4” 220-pound WR rises with ease to climb above the Defensive Back:

For someone so large he’s also quite adept at warping and twisting his body to adjust to catches. I find if someone is able to adjust their body so easily and remain balanced, then it gives a solid foundation to improved route running.

Having said that, the route running is where he is currently limited. He’s not electric fast and seems to have a limited route tree at the moment. Combine those two factors and you’ll see that he struggles to get separation. His route running will undoubtedly need to be his main area of focus as he transitions to the pros.

AGG came into 2019 red hot and has been one of the more prolific WRs this season. Through 7 games so far, he has 43 receptions for 877 yards and 5 TDs. He looks set to eclipse his 2018 totals by quite a margin. He currently has the 3rd highest receiving yards in all of college football and only has one game under 70 yards. A breakdown of his college stats can be seen below:

Something that’s bound to be a talking point during the draft process is the Liberty competition. AGG has but up large numbers regularly in 2019 (5 games over 100 yards in 7 games), however, the teams Liberty have played are less than impressive. Previously an Independent school, they joined the FBS in 2018. Arguably the 2 best schools they’ve faced so far are Virginia and Auburn. In both those games, AGG struggled. He only reeled in 5 passes for 60 yards combined in both those games.

AGG won’t be in the upper echelon of WRs in this deep 2020 class, but he’s certainly a 2nd round prospect to keep a close eye on. He has the frame and flashes potential to be a monstrous WR in the NFL but will require some technical improvements to add versatility to his game.

The team is working on the 2020 rookie rankings this weekend...well have 1QB and Superflex Rookies separated. Look for them Monday on the site!

Who you got your eyes on today 👀

🆕All-Star Season is upon us. First up is the East-West Shrine Game. @reflipewthenuz is here to break down some of the more interesting players for you to keep an eye on leading up to and during the game ⬇