The People vs. Kyle Pitts

Kyle Pitts’ value in 1QB rookie drafts is a hotly contested conundrum. Can a case be made for him as the 1.01? Let @Spydes78 testify on behalf of this incredibly unique prospect before you deliver your verdict. 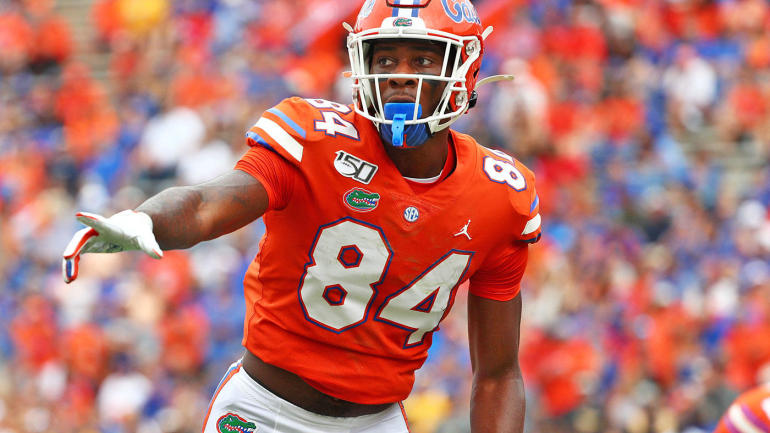 Social media is awash with owners seeking urgent, on-the-clock counsel or boasting their war room conquests.  The bounty of opinions can be a challenge to navigate, but that tapestry of viewpoints is frankly what sets the hobby apart.  Respectful discourse is essential to growth and has fueled the dynasty format since its inception.

For the 2021 rookie class, one such debate has surfaced regarding the standing of Mr. Kyle Pitts.  Some have advocated for the selection of the standout tight end as highly as the first overall pick.  Given his position on the field, this is very unconventional thinking and thus the concept has been met with a great deal of resistance throughout the community.

If you find yourself skeptical of Pitts, this piece is for you.  I hope to provide you some food for thought to challenge your perceptions of his current price point.  Even if you ultimately find yourself steadfast in your convictions, it costs nothing to read and perhaps you’ll learn something.  You’ve come this far, so I hope you’ll continue to indulge.

Pitts as a Prospect

Any defense of Kyle Pitts must first begin with his outrageous traits as a prospect.

Unless you’re completely new to football, you know that amateur scouts tend to argue over the best methods for prospect evaluation.  Clashes between the ‘analytics hive’ and the ‘film hive’ are not at all uncommon.  However, like the proverbial olive branch, Pitts seemingly has the attributes to unify all communities.

Pitts’ Relative Athletic Score, a consolidated metric gauging athleticism, comes in at a gaudy 9.66.  This is the 33rd highest score ever recorded at the tight end position, with 929 players qualifying since 1987.  According to the metric’s creator, Kent Lee Platte, more than 50% of the Pro Bowl tight ends since 2000 have registered an R.A.S. score higher than 9.  Kent Lee Platte’s statistical analysis contends that, for tight ends, there exists a strong correlation between athletic measurables and league success.  This association obviously bodes well for Pitts.

From a performance standpoint, Pitts’ career at the University of Florida is no less impressive.  In 2020, Kyle Pitts led the nation’s tight ends in receiving yards (770) and receiving touchdowns (12).  He incredibly did not have a single dropped pass all season en route to being selected as the John Mackey Award recipient, presented to college football’s best tight end.  PFF gave Pitts a 96.2 receiving grade in 2020, the highest assessment that they have ever offered a tight end since the organization’s inception.

State of the Tight End

As a position, tight ends are often regarded just above kicker in the dynasty pecking order.  Some leagues go so far as to add scoring premiums to increase the positional value, but historically it is not considered a highly desirable position.

Instead, particularly in single quarterback leagues, owners often swoon to running backs and wide receivers with their high rookie draft capital.  However, further inspection reveals that the security may not match the billing for these conventional choices.

Consider, according to ADP, the top running back selected over the last three rookie draft seasons: Clyde Edwards-Helaire, Josh Jacobs, and Saquon Barkley.  Though admittedly a small sample size, startup ADP from their rookie season to the present has actually declined by 4.8%.  Thus, these assets are worth slightly less now than they were when drafted.

If we repeat this experiment with wide receivers, we come up with a list consisting of Jerry Jeudy, N’Keal Harry, and D.J. Moore.  Fueled by Harry’s complete flame out, these players average a decrease in startup value of 110.9%.

Again, the populations are not sufficient to draw statistical conclusions.  However, the experiment makes it entirely reasonable to question the longevity of rookie values at these more traditional positions.

Now consider the previous top tight ends: Cole Kmet, TJ Hockenson, and Mike Gesicki.  All three players are presently well regarded dynasty assets.  In fact, when you perform a similar analysis you find that on average their startup ADP has actually increased since their rookie seasons by an average of 16.2%.  Thus, in this limited study, tight ends actually hold their value better when compared to their positional counterparts.

To further support this line of thought, consider the current Dynasty Nerds positional rankings.  From the candidates mentioned, only Saquon Barkely is currently regarded among the top 12 running backs.  Similarly, D.J. Moore is the only wideout that finds himself listed as a WR1, with Jeudy and Harry finding themselves left out.  However, when it comes to the tight ends, all three (Kmet, Hockenson, and Gesicki) are listed amongst the leading 12 at their position.

It may surprise you, but tight ends like Kyle Pitts actually offer the safe value floor that savvy owners covet for their high rookie draft capital.

As mentioned previously, everyone has a unique process for talent evaluation.  Some lean heavily into measurables or BMI to identify a can’t miss prospect.  Others lock themselves away with hours of coach’s tape, only to emerge victorious like a film-engorged butterfly from its shadowy chrysalis.

Regardless of your preference, no method of preparation is foolproof.  However, professional bookmakers have an uncanny ability to model sporting success.  With sports betting exploding in popularity, the pressure has only increased for these experts to be accurate with their prognostications.  Thus, when they speak, you would be wise to pay attention.

Earlier this week, FTN Bets, a Las Vegas based sportsbook, posted their odds for the NFL’s Offensive Rookie of the Year.  As you might imagine, the favorites for the award in 2021 are all quarterbacks.  As the most high profile position in sports, it’s reasonable to suspect that Lawrence, Fields, Lance, Wilson, or Jones stand the greatest chance to bring home the hardware.

Unless you play in a superflex format, this information is not of much significance.  The particularly useful information lies for those who dig deeper.  So, which non-quarterback currently has the most favorable odds of winning rookie of the year?  At +1300, that distinction belongs to none other than tight end, Kyle Pitts.

With millions of dollars on the line, Vegas bookmakers are willing to wager that Pitts will have a greater rookie campaign than Najee Harris (+1600) or Ja’Marr Chase (+1500).

The last factor that I will submit for your consideration is Pitts’ fit with the Atlanta Falcons.

Despite their failures in 2020, Atlanta actually had a fairly prolific passing attack.  Ranking 5th overall, the Falcons compiled 4,363 yards through the air, according to Pro Football Focus.  The often overlooked Matt Ryan can still sling it.  Despite the presence of two high end pass catchers in Julio Jones and the emerging Calvin Ridley, starting tight end Hayden Hurst still managed to post a respectable season featuring 571 receiving yards and 6 touchdowns.

Perhaps the most compelling Atlanta statistics come from the defensive side of the ball.  A maligned unit in 2020, the Falcons ranked 19th in scoring defense, surrendering an average of 25.9 points per game.  Team leader, Keanu Neal, also departed for Dallas in free agency further degrading an already suspect unit.  Though well regarded rookie Richie Grant is expected to fill Neal’s role, he has big shoes to fill and faces a steep learning curve.

So let’s summarize what we know about the 2021 Falcons.  They play in a division with some potent offensive fire power, and are likely to regularly concede points.  To compensate, they have a high powered passing attack of their own.  Led by a talented veteran quarterback, the Falcons have no objection to airing it out and will likely need to do so to stay competitive.  They have historically valued the tight end position and utilized tremendous draft capital to select Kyle Pitts.

Frankly, it’s hard to imagine a more custom made opportunity for Pitts to be successful.

Selecting a tight end early in your rookie draft is not at all consistent with traditional dynasty theory.  However, occasionally a prospect like Kyle Pitts can cause you to challenge mainstream conventions.

Pitts offers exceptional athleticism and he has demonstrated the ability to translate those traits to on-field collegiate success.  From a dynasty perspective, top tight ends have retained their value when compared to other positions.  And, Pitts possess the unique potential to crack an extremely shallow tier of elite NFL tight ends.  Professional oddsmakers have forecasted an immediate path to relevancy, by making Pitts the skill position favorite for rookie of the year.  Lastly, Pitts finds himself on a Falcons team chock full of opportunity for a promising, young tight end.

There are a lot of good reasons to believe that Kyle Pitts is worthy of your selection, even at first overall.  However, perhaps the best reason has nothing to do with measurables, statistics, or team fit.  Rather the best reason to select Pitts is simply that you like him.  Sure, do your homework and be prepared.  But ultimately, fantasy is all about the pursuit of happiness.

If popping Kyle Pitts into your weekly lineup feels right, then you should cast off the shackles of tradition and go get your guy.  Time will tell if you’ve made the right choice, but at least you’ll carry a smile along the way.  Never forget, fantasy should be fun, and rostering Kyle Pitts seems like a good time to me!

I thoroughly enjoyed bringing you this piece, and would love to continue the conversation on Kyle Pitts.  Please feel free to comment below or contact me @Spydes78 on Twitter.  And also, stay tuned to @DynastyNerds for a steady pipeline of content from our eminently qualified staff to carry you through your offseason.  Enjoy the grind!