In Matt Miller’s latest mock, he has Donovan Peoples-Jones selected in the first round. Check out @DynastyJon’s take on the WR selection! #NFLDraft 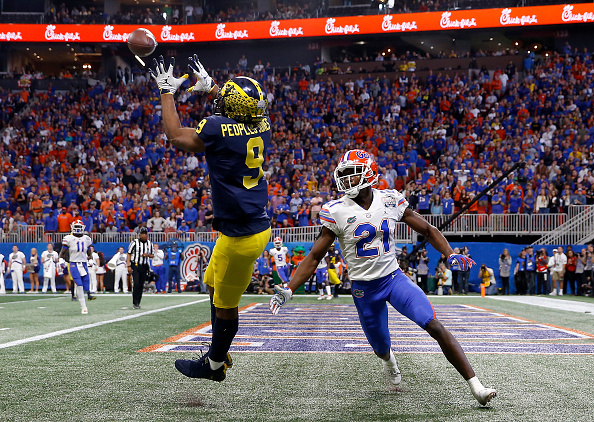 In Matt Miller’s latest NFL mock draft, he had the Bills selecting a relatively surprising WR at pick 26 in the first round. As the 6th WR off the board, he has projected Donovan Peoples-Jones to the Bills as a weapon for Josh Allen. That has him right behind Jerry Jeudy, CeeDee Lamb, Henry Ruggs, Tee Higgins, and Devonta Smith.

Regarding the selection, Miller had this to say, “Get Josh Allen weapons. That should be printed in large, bold letters across the Buffalo Bills’ draft board. Michigan’s junior receiver Donovan Peoples-Jones is the type of weapon the Bills need. A 6’2″, 215-pounder with power after the catch and an ability to win as a vertical threat, plus an excellent jump-ball player in the red zone, Peoples-Jones will open up the entire Buffalo passing game. No position is a bigger need in Buffalo, which matches up excellently with the depth of the 2020 draft class. While DPJ didn’t wow with stats at Michigan, especially in a 2019 season that saw him miss time with injury, scouts will look at the quarterback talent he was working with in college and understand that his best football is ahead of him.”

Miller isn’t lying about the lack of statistical production which has kept him off most dynasty analyst’s radars. During his three years at Michigan he only 102 passes for 1,293 yards and 14 TDs. Most elite prospects would accomplish that in one season, let alone three. A breakdown of his college stats can be seen below:

DPJ certainly would fit a vertical need for the Bills. John Brown and Cole Beasley are the current primary threats in the Bills passing game. Brown is a slender 5’11”, while Beasley measures in at 5’8”. They’re hardly out there ‘Mossing’ defensive backs. DPJ would bring that element to an offense to catch the bombs thrown down field from Josh Allen’s cannon. Tell me, could Brown or Beasley make this type of catch?

His physical traits are quite appealing, however I’m weary that he’ll be a first-round selection in such a stacked class. With so many options at the position in this class, it’d seem peculiar for the Bills to take a risk on a guy with a limited sample size in college.

Something to also consider is the fact that DPJ has earned academic All-Big Ten honors. Following on from that, he has made it publicly known that he has dreams to be an orthopedic surgeon as well as an NFL player. Could that raise questions about how long his career might last? Only time will tell.

At this stage it’s too early for me to consider DPJ in the top tier of rookie talent. He certainly isn’t in my 1st round as things stand, and I’d have to see him selected in the first round for that to change at all. I think this is an optimistic prediction from Miller and would currently view DPJ as a 2nd or even 3rd round rookie pick at this stage.

Given his athletic traits, I’m excited to see his combine production and make more judgements from there.