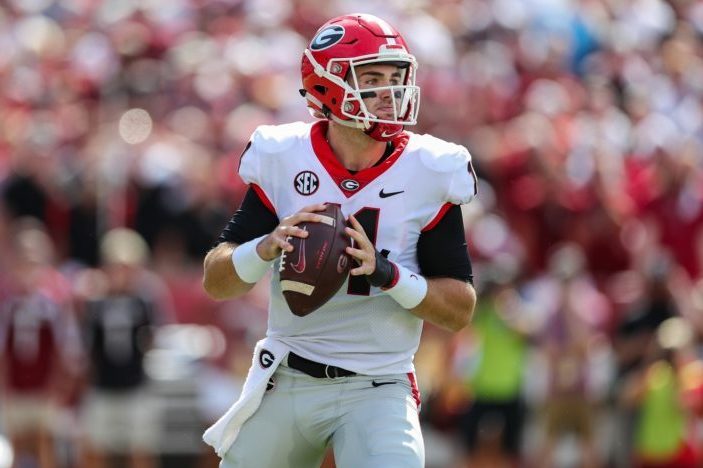 For all those Superflexers out there, the 2019 QB class is nothing to write home about. After a strong 2018 class, the 2019 class is a little below par. Only Kyler Murray and Dwayne Haskins appear to have a decent chance for immediate production at the next level. Beyond that, the other prospects have their fair share of risk. As such, you’re unlikely to see more than those 2 QBs selected in the first round of your rookie Superflex drafts.

It’s certainly early, but all signs point to the 2020 QB class being a little more promising. There are rumored to be several higher end prospects that could contribute to dynasty rosters right off the bat. This article will give a brief breakdown of those prospects that you should keep an eye on, while rookie fever is high.

Now that’s a name that will be spelt wrong many a time. His full name is Tuanigamanuolepola Tagovailoa. So, we’ll just stick with Tua. Perhaps the most ‘famous’ QB in the 2020 class, Tua has been front and center on the national stage under center for ‘Bama. The Hawaiian lefty has already won a National Championship and finished as a runner-up to Kyler Murray in Heisman voting last year. He also set a new NCAA FBS passer rating record of 199.4 for the 2018 season, surpassing the record 198.9 set by Baker Mayfield in 2017. That’s all that needs to be said.

The star of the Netflix documentary QB1 made an instant impact under the lights. He became the Georgia Bulldogs starter as a True Freshman following an injury to Jacob Eason and never looked back. That year (2017), Fromm led Georgia to the SEC championship and was named SEC Freshman of the year. He looked instantly impressive and comfortable passing from the pocket and has the ability to make every throw accurately. His leadership is evident if you ever followed him off the field. He has a natural energy that reminds me a lot of Andrew Luck’s likeability.

Fromm continued the impressive start to his college career with a strong sophomore season in 2018. He completed 67% of his passes for 2,761 yards and 30 TDs (only 6 INTs). He led the Bulldogs to defeat Oklahoma in the Rose Bowl before falling to Alabama in the National Championship game. I fully believe that Fromm has the ability to throw for a lot more yards also, however, Georgia committed to the run with the likes of Sony Michel, Nick Chubb, D’Andre Swift, and Elijah Holyfield in the backfield.

I expect Fromm to be right in the hunt for the Heisman this year, with Georgia likely looking competitive once again.

There were many that thought Herbert may declare for the 2019 draft, however, the Oregon QB decided to stick around for his Senior season. Expectations were high in 2018 for Herbert as he had completed over 60% of his passes in each of his first 2 seasons and looked to display all of the tools needed for a franchise QB. His 2018 season ended up being a little hit or miss, however. There were moments of brilliance but also far too many incomplete passes. Considering 2019 is arguably a weaker class, his decision to stay was a little puzzling but oh well.

Measuring in at 6’6” 225 pounds, Herbert has size and impressive athleticism, to go along with a nice touch on his passes. The Oregon offense leads to Herbert just throwing to his first target in his progressions, so he’ll likely need to work on that. However, the upside is there.

Ehlinger is certainly not a lock, but I’m keeping an eye on him, nonetheless. He really displayed some traits that impressed me in 2018 and I’m curious to see if he maintains his development arc. As a Sophomore in 2018, the 6’3” Texas QB completed 63% of his passes for 3,292 yards with 25 TDs and only 5 INTs. He performed in all the big games in 2018. He looked impressive against Oklahoma, West Virginia, Oklahoma State, USC, and TCU. Sam Ehlinger very well could be a dark horse riser through 2019. Being the Texas QB however, I’m sure you will hear all about it!

KJ has similar physical tools to Herbert. The 6’5” 215-pound QB isn’t someone I’ve seen a lot myself, but I’ve heard really good things from fellow analysts I trust. In 2018 he completed 65.1 percent of his passes for 3,540 yards with 29 touchdowns and 11 interceptions. He showed great arm strength and Bleacher Report’s Kristopher Knox listed him as one of his 8 top players to watch in 2019. With 43 TDs and only 15 INTs over the last 2 years, Costello will look to follow in the footsteps of Luck and Elway on his way to the NFL.

A slightly under the radar pick here is Cole McDonald. The Hawaii QB only started under center for the first time in 2018 after emerging from the shadow left by Dru Brown.

He certainly didn’t disappoint once he took the reigns as he threw for 3,875 yards, 36 TDs, 10 INTs and a 146.5 QB rating in his first season as a starting QB. Measuring in at 6’4” 205 pounds, McDonald likely won’t get a ton of recognition playing for a mediocre team in the MWC, however, there’s a realistic chance he throws 45+ TDs in 2019.

Having said that, most of his production came in the first half of the year. The second half of the season brought the emergence of Chevan Cordeiro so we’ll have to see how that plays out.