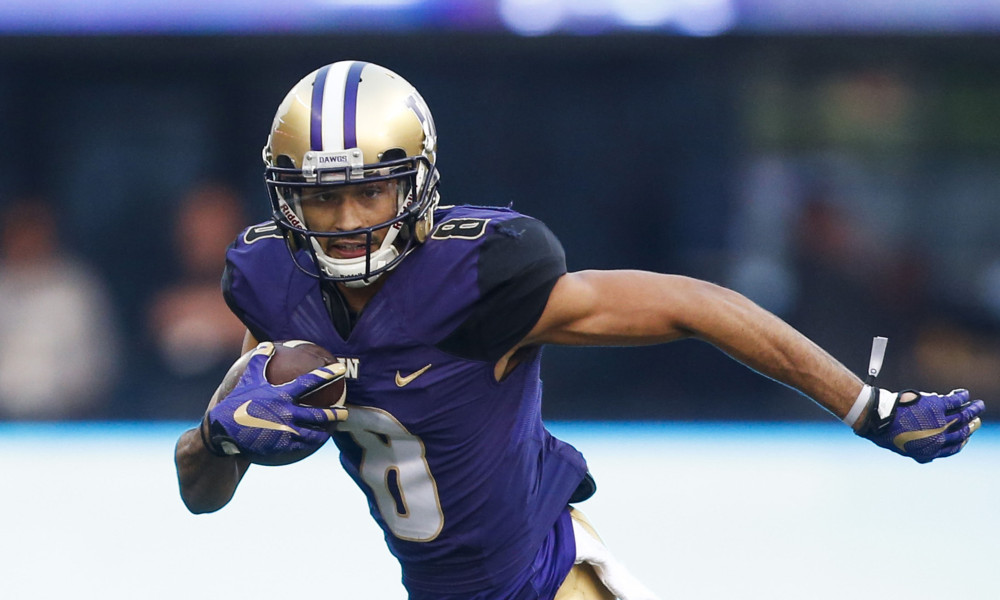 Dante Pettis is the perfect type prospect you could find later in your rookie drafts. He has the combination of flash and dash that gets me excited when I watch WR tape. NFL coaches should be dreaming of drafting him every night because the guy can do a little bit of everything and is the type of player who you get excited to use in your offense.

Dante Pettis is a 6’1, 186lb, WR out of Washington. For a WR he doesn’t have the ideal size but he isn’t projected as a #1 at all due to his frame. Anyone who’s ever watched his tape one thing is undeniable, he is a tough tackle in the open field.

When looking at his career at Washington he had his share of ups and downs. His high coming in his junior year where alongside John Ross he was able to have a massive year scoring 15 touchdowns on only 53 receptions. An efficiency of a ridiculous 28% of his receptions going for touchdowns. This shows his ability to be a great compliment to a big receiver which is where I see his value coming from.  In his senior season, he saw a downtick in yardage and touchdowns as Washington struggled to move the ball without the combine record holder split out wide. Pettis saw an increased workload though getting 63 receptions for only 761 yards but considering Jake Browning’s pass attempts decreased by 80 that’s a good improvement with more focus being put on him without ross commanding so much attention. Oh and I almost forgot to mention that he broke the record for NCAA punt return touchdowns, not really a big deal. In 2017, Pettis broke the PAC 12 record previously held by Desean Jackson and later the same year broke Wes Welker’s all-time record of 8, getting to a total of 9 to hold it all to himself and passed two pretty good pros along the way. This guy is one slippery fish in the open field and has the speed to burn guys once he gets the ball. 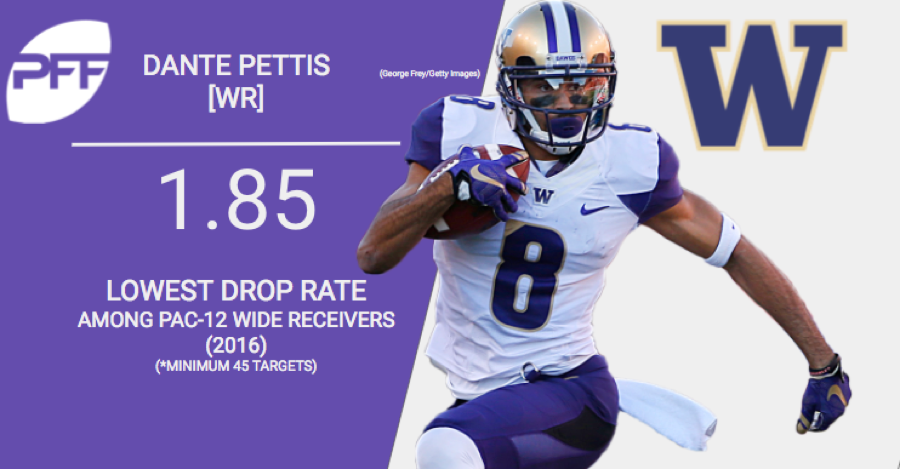 You may be wondering how he will translate to the NFL. I see him as likely a slot guy, gadget, screen specialist type which doesn’t sound too sexy but there is a definite upside for him. I could see him as a potential Golden Tate because of his ability to break arm tackles. He’s a great route runner, has to improve as a pass catcher as he uses his body too much at times. He is able to high point the ball quite well for his size and frame but doesn’t necessarily have the strongest hands to come down with a lot of jump balls. Due to his ankle injury, he did not participate in the NFL scouting combine or his pro day at Washington so his athletic profile is incomplete. On tape, he has the size and skill to be successful at the next level. Needs to work on his routes slightly to improve separation if he wants to play outside but even as he is now he’s going to be drafted just off his explosiveness and playmaking ability alone. I would not be surprised at all if someone takes a chance on him early on day 3. Similarly, to around where Ryan Switzer went last year, except Pettis has the ability to play outside, or should at least be given a shot.

Pettis has good long speed, has good feet and could be producing a lot of highlights early in his NFL career if he can stay healthy. Many will likely question his health because he did have some issues in college and even right now is currently recovering from an ankle injury. Hopefully, he can have an individual pro day because I think he would perform well enough to get a little more love from the dynasty community. I currently have him ranked as my WR11 pre-combine right between Anthony Miller and Cedrick Wilson. The three of them will be very landing spot dependant and if given a chance all could see success at the next level. Pettis is probably the name you haven’t heard of as much, if at all. Don’t sleep on Pettis, solid 3rd round value as it sits right now and potential to move up if the right fit comes about.