The Running Back Leasing Method

In the world of dynasty fantasy football, running backs are the most volatile commodity in the game. There is a fine line that you have to walk to make sure that you’re not selling too soon on him, like walking away from Christian McCaffery prior to last season and trying to sell a player one year too late, like trying to sell Todd Gurley now. 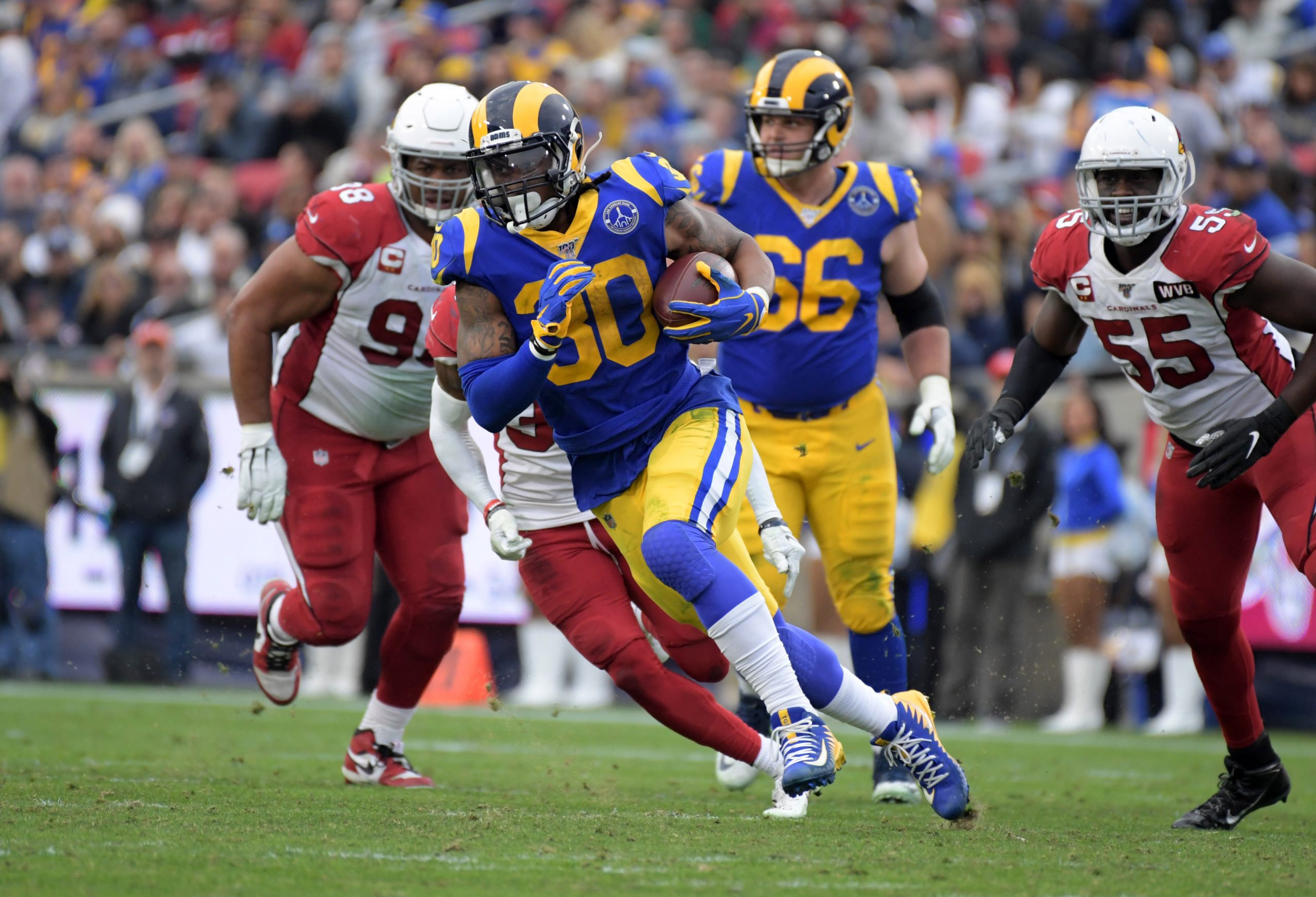 Handling the running back position properly in dynasty fantasy football can be the difference in winning for years or losing for years.

In the world of dynasty fantasy football, running backs are the most volatile commodity in the game. There is a fine line that you have to walk to make sure that you’re not selling too soon on them. For example, walking away from Christian McCaffery prior to last season, or trying to sell a player one year too late, like trying to sell Todd Gurley now.

Gurley is a prime example of this. He finished second in the MVP race after the monster season he put up. You weren’t selling him unless you were receiving the Brinks truck offer. Just over one year removed from the end of that season, you’re selling him for peanuts in comparison to what you could have gotten had you sold him during that big year.

Because of players like Gurley, and running backs in general, failing to maintain their value for extended periods, I’m completely scrapping the way I approach the position. I think you should strongly consider doing the same. I am no longer looking at running backs like work trucks and tractors that can run for years on end. While players such as quarterbacks (Drew Brees could have been your starting quarterback for like 15 years), you need to start looking at them like leasing a car. Grab them for two to three years, and sell them off before they start costing you more than their worth.

The purpose of this exercise and method is to provide you a more efficient way to utilize the running back position for dynasty football. This will help you be more successful in the long run. Limiting the amount of capital you have invested in running backs allows you to invest more in other more valuable positions. Let’s quit stalling, and let’s get into it.

The average car lease term is between two and three years. That’s the exact timeline that you should be looking for with the running backs that you add to your roster. Running backs, on average, are going to give you two to three years of elite production before they begin to decline, and they’re going to decline sharply. Your absolute hard deadline on a player needs to be before their second contract kicks in. Once the extension happens, sell as quickly as you can. They’ll have great value because their situation is set for the foreseeable future until they inevitably get cut.

Honoring the timeline is the key to making this entire strategy successful. You always think that you can get one more year out of that car before it becomes a headache, but one year later, you’re kicking yourself for not moving on when you should have. You should own a player for a maximum of four years if you can get them as a productive rookie. Otherwise, at the end of year two, you need to consider making that move seriously.

Could you get one more year of good play out of the guy you’re selling? Probably. However, this is when the New England Patriots model comes into play. You’re not paying for past performance anymore, and you can never be afraid to move on from a player one or two years early. Bill Belichick has been working the free-agent market for two decades. He is never afraid to let a player go for any reason. You need to do the same with your running backs.

Who should I be looking to target with these short-term buys? You need to be going after guys heading into years 3 & 4 that will be in line for extensions by the time those seasons are over. For instance, Dalvin Cook, Aaron Jones, and CMC were all the perfect targets for this system entering the 2019 season. CMC was pricey, but you were going to get the value from your buy of him. Cook and Jones, meanwhile, rounded out the top three among PPR running backs last year.

Running backs in their rookie season are rarely relied upon to carry the full workload. But they are extremely hyped entering their second season, as evidenced by Miles Sanders being drafted as the 10th running back off the board in startups right now. That hype makes their price skyrocket, and it makes them more challenging to acquire. Your target window turns into players coming off of their sophomore campaign where they were good, but not great.

The 2018 class of running backs has taken some significant lumps of late. With Royce Freeman further buried on his depth chart and Derrius Guice now has several more mouths in the running back room of Washington. However, guys like Kerryon Johnson and Ronald Jones, for the right price, become interesting this year because of better situations, in the case of Jones, or a lack of competition, in both cases.

Does everyone want to have two studs on their roster at all times? Absolutely. Unfortunately, that’s not always a realistic task. This is why leasing running backs can help you keep your roster well stocked. The strategy is to maintain one stud running back constantly on the team. After you complete a trade that lands you a player that pans out, you trade the incumbent for draft picks, your next target on the market, or both.

For instance, on one of my rosters, I have Joe Mixon, who is a certified stud on my team. I have multiple first-round draft picks this year. I’m hoping to turn at least one of them into a stud rookie running back that can develop and take his place. Mixon and other players of his caliber allow you to keep your team moving forward when your rookie or recent purchase stumbles.

Your bench is likely going to be stocked with running back stashes with a lot of upside. It’s unlikely that you’re going to have starters on your bench because that’s just not how it’s going to work. Every roster needs to have dart throws waiting in the wings in the event they pop and become a fantasy contributor.

I recommend always trying to get at least one handcuff on your roster for one of your studs, or one of the league’s top running backs. It gives you more trade power in negotiations when selling. You can sell that handcuff for a higher price to the owner of the aforementioned stud. For example, grabbing Alexander Mattison last season to trade him to the Dalvin Cook owner would have netted you a lot more than trading him to anyone else in the league.

Exceptions to the Rule

Alvin Kamara of the New Orleans Saints is a running back that I want every share I can get my hands on. He’s heading into year four, which would hypothetically put him in his last year of the great production window for this player management system. However, because of how he’s been used, he’s got a lot more tread left on those tires. He’s got 728 touches to his name. Compare that to CMC, who has 926, which is nearly 200 more total touches, and they started the same year.

You should never be chasing the next exception to the rule. If you can find players that have served a largely secondary role who is heading for a lead-back role, you can have confidence buying them. This system isn’t the end-all-be-all. You can find ways to work around it that can still lead you to develop a successful running back room.

Running back is one of the hardest positions to figure out in the dynasty fantasy world. Turnover happens so fast. While you could be drafting a guy that’s a starter in Week 1, the wheels could fall off by Week 6. You always have to be ready to move on from a guy early rather than late. Keeping your war chest well-stocked is how you’re able to cycle through good running backs without ever being left empty-handed.

Your lease on a player is going to end just like it ends with a car. When that time comes, you have to be willing to say goodbye. One more thing, never be afraid to pay up for your guys that you’re trying to acquire. If you play this strategy right, you’re always going to be reloading with picks and players. That’s the whole point. While you may be empty-handed for a short time, you’ll be adding to it when you make your next sale.

The system works as long as you’re always willing to move forward. This is how you can keep yourself in contention every year. Wide receivers are easier to come by, which is why running backs are so valuable as short-term assets. Implement this strategy from the jump in your leagues, and you’ll be a thorn in the side of everyone in the league.