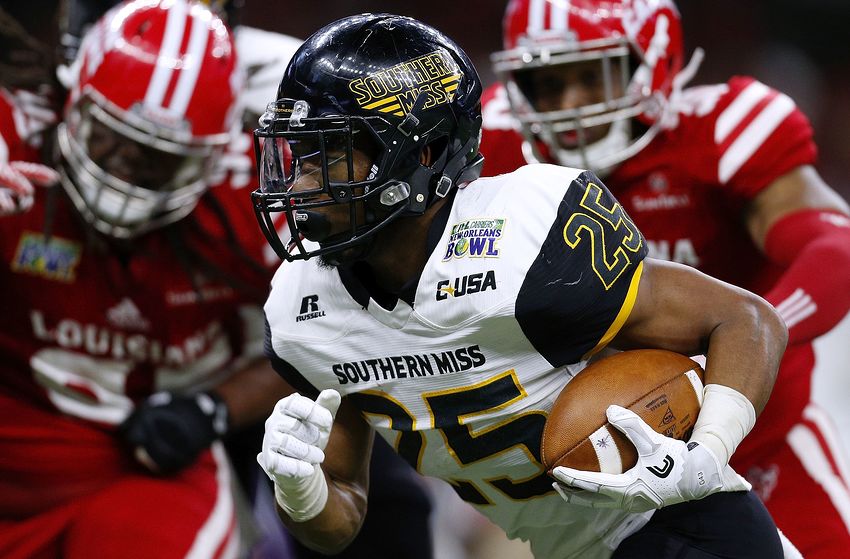 You would think that a running back, who rushed for 1413 yards, 13 TDs, as well as catching 40 balls for an additional 400 yards and 2 TDs in 2017, would be on the radar of more dynasty owners. However, Ito Smith persists to slip under the radar.

Despite 4,356 rushing yards, 49 total TDs, 140 receptions, and averaging 5.5 YPC for his entire career at Southern Mississippi, there are those who likely won’t recognize his name. The reason being is most likely due to the fact that he’s 5’9”, 195 pounds, and therefore many analysts wouldn’t consider him bulky enough to be a feature back. And he’s not. He most likely will be a scat-back with good receiving and ‘breakaway’ ability. And that’s okay. He is a good scat-back at that and running backs like that are holding more value these days.

A breakdown of his consistent college production can be seen below:

Smith leaves Southern Miss as the schools second all-time leading rusher, behind only Damion Fletcher. Not only was he efficient, but he did it in style. I hate the phrase “in the open field” because any pro in open space can gain yardage. However, Ito Smith excelled at creating large gaps for himself. He’s incredibly agile and nimble. He makes tacklers miss with regularity and has the speed (it’s reported he ran a 4.48 40-yard dash in high school) to breakaway outside. He’s one of those guys that just makes things happen with the ball in his hands. Players are too often compared to Darren Sproles, but that is the vibe I get.

Another strength that will play well in his favor is his pass blocking ability. If he’s to have a substantial role on 3rd downs, that’s precisely what teams will look for. Not only does he keep pressure off his QB, but he’s also frequently seen sprinting downfield to throw some weight.

A notable weakness from the tape is that he never puts 2 hands on the ball. He’s not a big guy, so constantly running through the trenches with one hand is a delicate proposition.

Smith did a fantastic job at the recent Senior Bowl, ultimately resulting in interviews with 25 teams. When asked whether his size would be a stumbling block, Ito said, “You can measure size, but you can’t measure heart. I talked to a couple of scouts. They said they didn’t care about size. They like what I bring to the table. I’m an open-field guy. I can make guys miss. Catch it out of the backfield. Run. Block. There are a lot of scouts that love me.”

Smith certainly won’t be a pick in the top few rounds. He’ll most likely get selected around the 5th round but could compete early for a backup job. Currently, I’d value him in the 3rd round of rookie drafts.

DJ Chark – Scouting Report
5 Prospects to Watch at the Combine