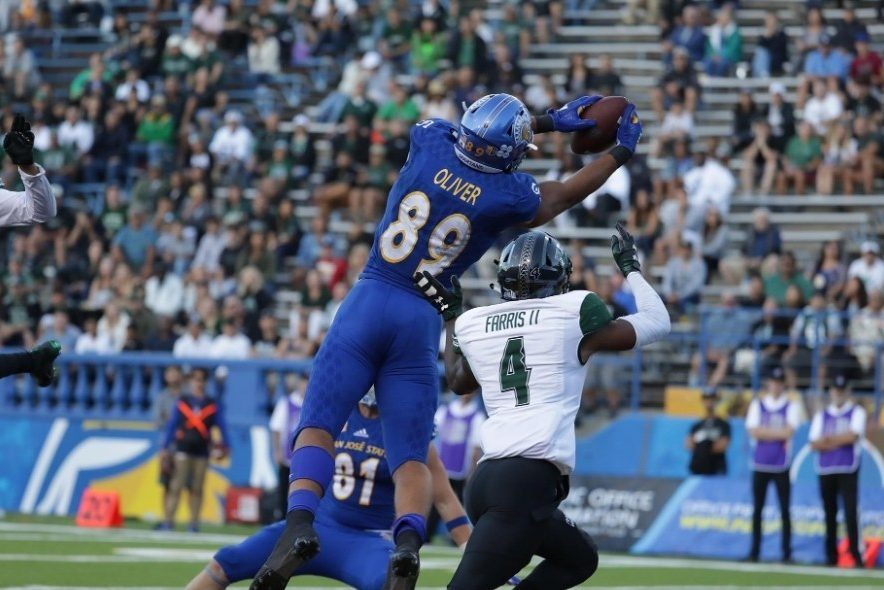 The Jaguars have revamped their offense this off-season. They finally moved on from Blake Bortles and invested in Nick Foles. Regardless of your opinion on Foles’ contract, I’m sure we can agree he’s an upgrade on Bortles. Additionally, they should have a much stronger O-line in 2019, compared to 2018. They added Jawaan Taylor in the draft, and they also have Cam Robinson, Andrew Norwell, Brandon Linder, and Will Richardson returning from injury. As such, the Jags’ offense should be off to a much better start in 2019.

Furthermore, they added one of my favorite playmakers in the draft. Josh Oliver is an absolute monster. The Jags drafted the San Jose State Spartan early in the 3rd round (69th overall), as the 5th TE off the board. The 6’5” 250-pound beast was the Spartans’ go-to target for all of 2018. They had special sections of the playbook dedicated particularly to getting him the ball. He was 5th among all college TEs with 709 receiving yards in 2018. He also had the 3rd most receptions for a TE with 56, while 39 of those catches resulted in first downs or touchdowns (lightyears ahead of any other TEs in the class). They used him in high leverage situations where they needed TDs or on 3rd down, and he always came up clutch. Oliver’s stats can be seen below:

The Jaguars depth chart at TE is far from threatening. That extends to the WR position too. Geoff Swaim, Ben Koyack, and James O’Shaughnessy should not be much of a hurdle to playing time for Oliver. I expect him to see a large chunk of snaps early on, particularly in passing situations. His blocking isn’t the best, but I see him being used as a big slot guy and think he could have a rookie season very similar to Mark Andrews.

Just prior to the Draft one scout for an AFC team had said, “I had him as my sleeper this summer, but he just put too much on tape to stay a sleeper. He can work in the slot but he needs to get better as a blocker so he can stay on the field on every down.”

I love Oliver’s receiving ability. For a former defensive end who converted to Tight End, he seems to have really natural hands. He also has really good balance and nuance to his routes. It certainly helps that he was asked to run a full route tree at San Jose State. All of those traits correlate to fantasy production. I also feel like he was able to adjust well to poorly thrown balls and could hold on through hard contact.

In terms of weaknesses, his blocking needs a lot of work. Admittedly blocking doesn’t equal fantasy points but it would allow him to stay on the field in more situations to take advantage of play actions.

With regards to rookie drafts, I had Oliver in my third round prior to the draft, but he’s now a worthy late 2nd rounder in my eyes. If you’re not willing to invest as high in the likes of Hockenson, Fant or Smith, then Oliver can be a very viable cheaper option for TE needy teams.

Kelvin Harmon – Steal of the draft
‘Why David Montgomery’