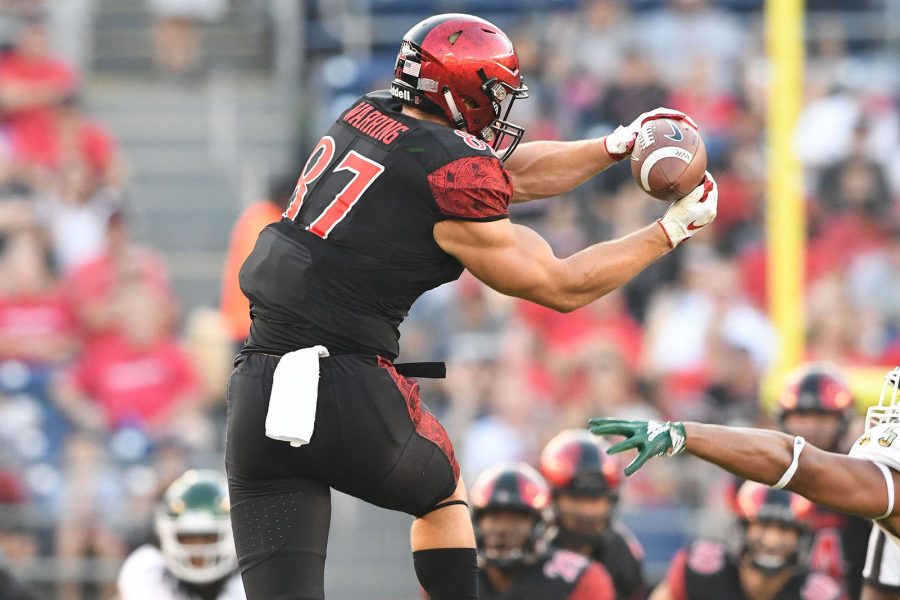 Kahalekuiokalani Michael Wodehouse “Kahale” Warring has the hopes of becoming the first reliable Tight End for the Texans in quite some time. CJ Fiedorowicz was forced to retire early due to concussions, Ryan Griffin was recently arrested, and neither Jordan Thomas nor Jordan Akins has impressed so far.

The last time a Texans’ TE reached 600 yards was 2012 with Owen Daniels. Now that the team has a proficient QB with Deshaun Watson who isn’t afraid to take shots, they will be hoping to build some support to offset Hopkins. Considering the Texans drafted Warring in the 3rd round of the NFL draft, they must be hoping that he can become just that.

It may not be an instant fulfillment however, as Warring appears to be a bit of a project. The 6’5” 252-pound TE was a latecomer to football. However, he played almost every other sport under the sun, competing in water polo, basketball, cross county, swimming, soccer, and tennis. It wasn’t until his Senior year of high school that he began playing football. That one year proved enough to gain interest from San Diego State to be a walk-on. Warring barely touched the field in his first 2 years at SDSU and only started 3 games in his 3rd season. In 2018, Warring once again only started 2 of the team’s 12 games but still earned All-Mountain West honors. A breakdown of his college stats can be seen below:

Despite being a newcomer to the game, Warring presents fantastic upside thanks to his impressive size, speed, and athleticism. The 22-year old ran a 4.67 40-yard dash, had a 36-inch broad jump, a 122-inch broad jump, and a 4.25 20-yard shuttle. From an athleticism perspective, he matches up quite well with Austin Seferian-Jenkins’ profile.

On top of his athleticism, it would appear that Warring loves to block. His technique could use work, but he certainly seems keen and willing to grind. The effort and toughness are definitely there. Moreover, it’s clear that he used to be a basketball player. He runs seam routes very well and blocks out defensive backs with ease. He also doesn’t go down easily, literally dragging defenders who attempt to tackle him.

He already seems to have gained Deshaun Watson’s trust. Speaking at OTAs, the QB said, “Very strong. Great route running skills. If the ball is in his area he’s gonna go up and get it.” He’s also earned warm praise from Head Coach, Bill O’Brien. O’Brien noted, “He’s attacking it the right way. He’s in early, he stays late. Will Lawing’s doing a really good job with all of those guys of meeting extra, getting them up to speed. I thought he got better today. It’s a small step, but from day one to day two it looks like he got a little bit better.”

Inevitably, his enthusiasm can only go so far. Being so new to the game is going to come with challenges. Experience is always a valuable asset. With the jump to the next level, I could certainly see Warring taking a few years to get comfortable with the pro game.

Currently, in rookie drafts, he seems to be in a tier with Josh Oliver and Dawson Knox. I think those 2 may produce a little earlier in their careers, given their situation. However, he may have one of the higher ceilings long-term. He could be a developmental project similar to Adam Shaheen. Despite that, I’d be comfortable investing a mid to late 3rd round pick in Warring, given the apparent upside, whilst stashing him on my taxi squad for a couple of years at least.

Patience Is A Virtue: Rookies You Will Have To Wait On For Production
Drew Sample: Misconstrued & Unappreciated