Answers to some tight end regression questions, broken down by @TheSmingDynasty – should you be drafting Andrews so highly? Kelce will be better? 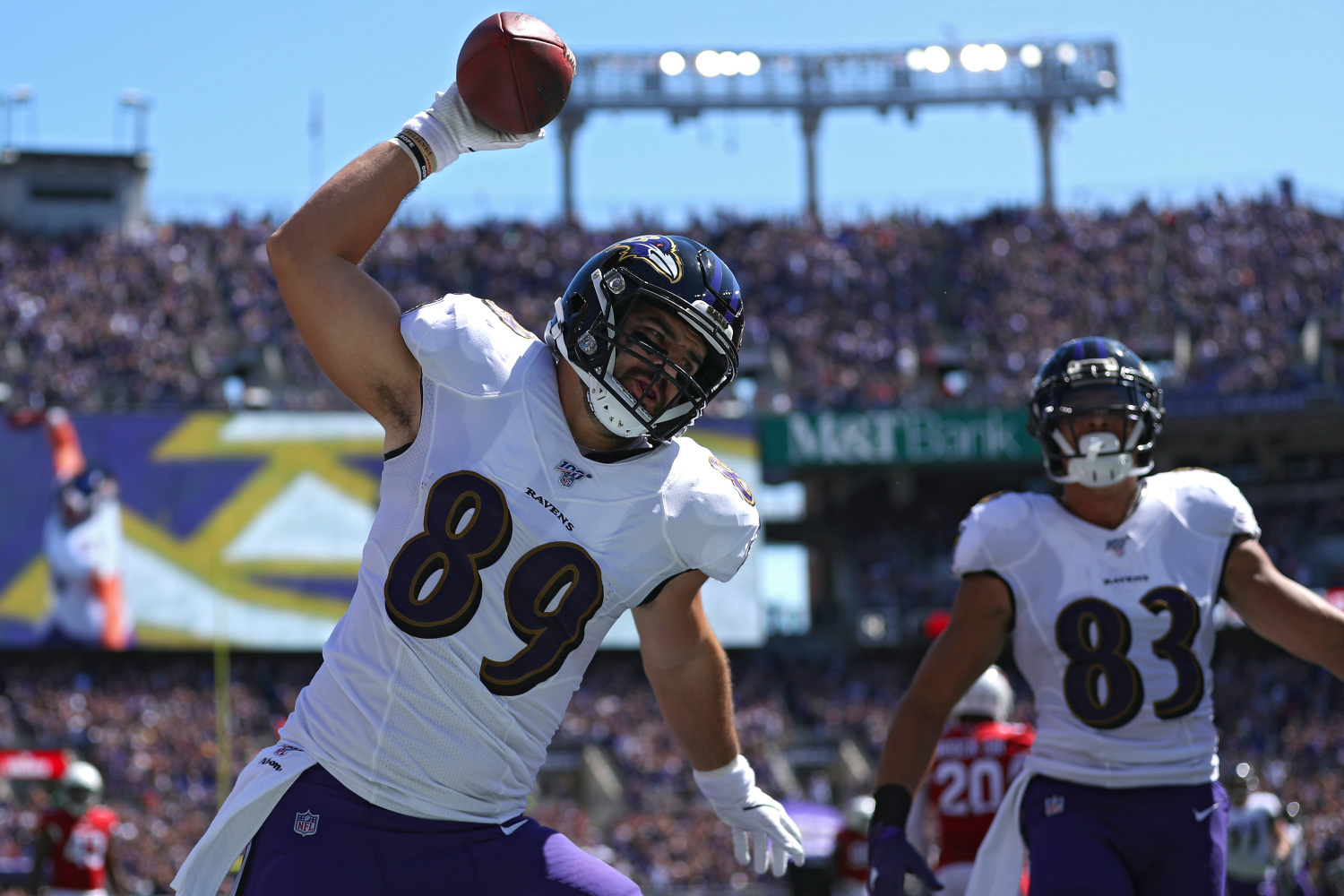 Most experienced dynasty players are all too familiar with failed attempts at finding the next Antonio Gates or Travis Kelce. Names like Ladarius Green, Gary Barnidge, and Trey Burton stand out like a sore thumb in many of our Most Regrettable Trades Ever lists. We can separate the trash from the treasure by sifting through historical data and looking for possible candidates for regression.

Understand first that regression does not always mean we’re looking for potential busts. We’re looking for possible bounce-back seasons as well. Regression is defined as both a negative and a positive return to “normalcy.” What if I told you that it’s likely, that Travis Kelce, fantasy football’s stalwart number one tight end, might be in for some positive regression this coming season? What if I told you to beware of Mark Andrews, dynasty’s newest tight end darling?

The numbers involved here are, to be honest, remarkably consistent over the past several years. Let’s first look at the percentage of total targets to touchdowns for the twelve players who finished that given season as a TE1.

Looking at the above data, let’s agree that roughly 6% of TE1’s targets will be touchdowns. There are many factors that go into this, including the type of offense, the other skill players around that tight end, and the style of the tight end – whether that tight end is more of a red-zone threat or receiving option between the twenties. Given those caveats, let’s also look at the red zone numbers for the past three years for tight ends who received more than ten red-zone targets that season.

Again, the numbers here are remarkably steady. Let’s use about 55% as the baseline for our red-zone targets to catch percentage and 29% for our touchdowns to targets when taking a relatively simplistic look for our negative and positive regression candidates.

Our first candidate is likely fairly evident to many of you. Much like Eric Ebron’s 2018 season, Jared Cook’s 2019 season was propped up by a seemingly unsustainable touchdown rate. Below are Jared Cook’s stat lines dating back to 2010:

For those of you in tight end premium leagues, which reward more points for receptions, keep in mind also, that Cook’s 43 receptions were the fewest among the top twelve tight ends in 2019, bumping him even further down the list. His reception total was much more indicative of a TE2 finish. The Saints enter this season with only 55 vacated targets, 8th fewest in the league, and they’ve added Emmanuel Sanders on top of the return of a fully healthy Alvin Kamara.

Can the TDs Repeat?

A stat line of 43-705-9 vaulted Cook to TE7 for the season with 167.5 PPR points. If we regress his touchdown total to our 6% baseline, his touchdown total drops to a rounded total of 3 touchdowns. At 43-705-3, he finishes with only 131.5 PPR points, which would put him at TE13 on the season. Not terrible, of course, and given his age and late ADP (he was the 24th tight end off the boards in June), Cook may still be worthy of the TE2 spot on your roster. None of this is guaranteed, one way or another, yes.

Cook may remain an integral part of the Saints’ offense, and it should be noted that Cook had some of his best games with Drew Brees under center towards the end of the season. If Brees continues to look his way in the red zone, perhaps he does come close to maintaining last season’s pace. The numbers, however, do tell a different narrative.

If you’ve done a startup in the past few months, you likely saw Mark Andrews come off the board as the third, or perhaps even the second tight end in your draft, behind George Kittle and up there with Travis Kelce. Before I get into these numbers, I want to acknowledge that I love Mark Andrews as a young, talented tight end. Nothing I am about to say will change that opinion. I am merely cautioning you to pump the brakes a bit on your expectations.

We don’t have many years’ worth of data for Mark Andrews, but here is what we have thus far:

In his breakout season last year, Andrews’ touchdown-to-target percentage was second-highest, by a wide margin, to only the aforementioned Jared Cook. The next closest, Hunter Henry, was at only 6.6%. If you dig deeper and look at his red zone numbers, you’ll see that Andrews was also well over baseline with a perfect eight receptions for eight touchdowns on 15 targets. Andrews’ 53% red zone touchdown-to-target percentage was second-highest amongst our tight end group to only Darren Fells at 55%. Remember, this number historically falls around 29%. Andrews’ 8 red zone touchdowns were also the most amongst this group.

You now may be thinking, “But surely, his targets will increase this season, won’t they?” Yes, the Ravens’ traded away Hayden Hurst, but the Ravens are entering 2020 with only 69 vacated targets. They also used a second-round pick on J.K. Dobbins, and a third-round pick on Devin Duvernay. Both are outstanding pass catchers and will demand targets sooner rather than later.

If you project an increase in Lamar Jackson’s pass attempts, which I believe many of us agree that they will, Andrews already led the Ravens last season with a 27% target share. The Ravens also led the league with a 41% share of targets going to their tight ends. What if the Ravens shift the balance of their passing attack even slightly, targeting their running backs and wide receivers more often? Andrews averaged 6.5 targets per game last year. The tight ends who finished above him averaged 8.5 (Kelce), 7.6 (Kittle), 7.3 (Waller), and 9 (Ertz) targets per game.

Is Andrews going to command a full target or two more per game going forward? Well, let’s say he does, but we roll his touchdown numbers back a bit. Andrews played 15 games last season, but let’s make some sample projections based on our 6% touchdown-target baseline in a full 16 game season:

As you can see, Andrews may move up into Travis Kelce territory, but it’s going to take a significant increase in targets to get there unless he maintains his touchdown pace. To put this challenge into perspective, Travis Kelce’s target totals since 2015 are 103, 117, 122 (in 15 games), 150, and 136.

Between the Ravens’ additions on offense and their low volume passing attack, I believe there are just too many numbers working against Mark Andrews to feel comfortable with putting him up in value with where Travis Kelce has been drafted for the past few years. Is he a great tight end? Absolutely. Is he worth a 3rd/4th round ADP? I don’t believe so. Not when I can draft or trade for other tight ends several rounds later, which potentially offer similar numbers in more pass-friendly offenses. Especially in tight end premium leagues where others provide a better upside for reception totals.

One Possible Candidates for Positive Regression

I know, I know, but hear me out. Despite finishing as TE1 overall, Travis Kelce had a down season in 2019! With only one game missed in the past six years, the only knock on Kelce’s ADP and value right now is his age. That aside, yes, the best could get even better. Let’s look at his recent numbers:

A quick glance will confirm the truth – Kelce’s percentages from this past season were at or near the worst in his recent career. His 37% red zone reception and 11% touchdowns-to-targets percentage were respectively the lowest of any tight end targeted ten times or more in the red zone. One possible contributor to his reduced numbers was the injury to Patrick Mahomes. Each of the three games in which Mahomes missed part of all of the game was in the lower half of Kelce’s weekly scoring totals. I realize that at his lofty status, Kelce’s numbers do not have much room to improve, but keep in mind that in 2018, Kelce finished with 295 PPR points. Last year? 254. Coming off of a Super Bowl victory, don’t count out the best tight end in football just yet.