The Unjustified Fall of D’Andre Swift

The D’Andre swift fall from the end of the college season to post NFL draft is unprecedented. Never have we seen a #1 projected rookie running back fall as far back as #4 in positional rankings. Is that the right call? 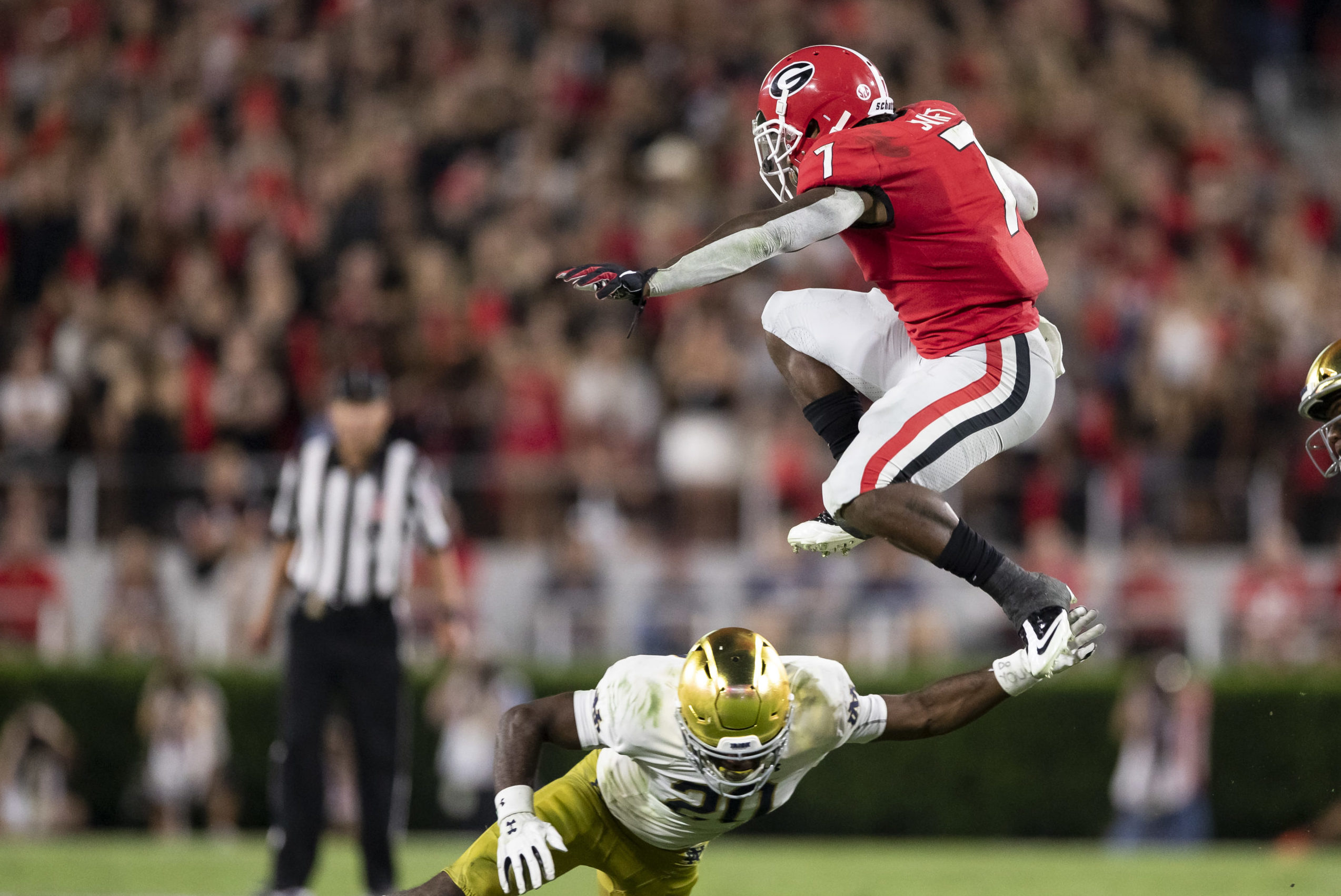 Following the 2019 NCAA season, the supreme being, in terms of dynasty rookie prospects, was almost unanimous: Georgia running back D’Andre Swift. This 5’8 212-pound running back with an intense running style, superior instincts, and devastating cutting ability that could break the ankles of a statue had scouts drooling. Film grinders loved him. Analytics couldn’t find a flaw. He was even hailed by many as the best pass-blocking running back in this class. Swift was the absolute 1.01 in rookie drafts. Everyone else was in the second tier.

On February 23, 2020, rookie NFL prospects set foot onto their Stadium of Olympia. Over the next seven days, their focus would be on how fast they run, how high they could jump, and how good they looked while doing it. The summation of all their hard work could potentially evaporate if these potential future NFL players don’t test at the highest levels possible. Some players make a name for themselves throughout this process; some players become forgotten.

Swift, being one of thirty prospects, had a reliable but not spectacular performance: his 4.48 40’ was 6th; his 35.5” vertical was 14th; his 121” broad jump was 16th. With a performance lacking flair, NFL scout’s attention quickly shifted to a 5’10 226-pound back who was lighting the combine on fire: Wisconsin running back Jonathan Taylor.

From combine to the draft, Taylor was the new poster child for the 1.01 in dynasty rookie drafts. Analytic driven companies were pumping Taylor hype into everyone’s minds. Film grinders weren’t that far behind, considering he had over 2,000 rushing and receiving yards in every college season compared to Swift’s most productive season was just north of 1,400. The only argument anyone could come up with was Swift was a better pass catcher even though Taylor had more receiving yards in both their final seasons. As the draft closed in, Swift supporters dissipated.

On April 23, 2020, the NFL Draft kicked off. Fates were soon sealed as analysts everywhere stayed attached to their Twitter accounts. Arguments over rookie rankings were about to be settled as destinations could alter a draft board by multiple spots, potentially even rounds.

Multiple teams had running back as a top need. A team direly needing a running back, the Kansas City Chiefs, was the JackPot of all landing spots. Could this be the way Swift regains his 1.01 crown? Many analysts had him projected to end up there considering head coach Andy Reid’s system and utilization of the running back. If undrafted running back Damien Williams could produce at a high-end level, could you imagine what potential first-round pick Swift would accomplish?

Can you Believe it?

April 24 at 12:10 AM, the Kansas City Chiefs select running back… Clyde Edwards-Helaire!

Twitter went nuts; analysts burned their projections; Swift touters fried their computers with tears. No one had answers for what just happened; that was until Andy Reid’s comments went viral.

Edwards-Hilaire- or CEH- was hot. He went from being people’s late first-round or early second-round pick to the 1.01, surpassing both Taylor and Swift. Coaches, former players, and analysts were hyping him up non stop. Everything from his pass-catching to his agility was being hyped through the roof even after posting subpar workout metrics. There’s a chance if you pulled up a picture of him on your computer, it would have melted your screen.

Day two of the NFL Draft ensued. Which team would be the next to take a running back? The Colts, Lions, Dolphins, Bucs, Falcons, Rams, and even Jags were thought to be potential landing spots in the second round for one of these sexy rookie running backs. Cam Akers, A.J. Dillon, Zack Moss, J.K. Dobbins, and Ke’Shawn Vaughn joined Swift and Taylor as guys thought to be worthy of a second-round pick.

The Colts had the first shot and, with an impressive offensive line, to say the least, any one of those rookies would have loved to end up there. However, they opted to take wide receiver Michael Pittman with their second pick in the second round. That left the Detroit Lions on the clock: a running backs worst nightmare.

And with the third pick in the second round of the 2020 NFL Draft, the Detroit Lions select running back… D’Andre Swift.

It was another blow to the gut of the Swift supporters. Not only did the Chiefs pass on him, one of the least attractive teams in terms of landing spot selected him. To make it worse, six picks later the Colts with one of the best offensive lines in the league drafted Taylor, the guy who had surpassed him following the combine process. Talk about getting kicked while you’re down. Following the Ravens selection of Dobbins, Swift was now battling for the fourth rookie running back spot with the Rams Akers in most experts rankings. How the mighty have fallen.

I was cautiously optimistic, however. From my point of view, it wasn’t as bad as people were presenting it. The running back position is the most independent in terms of fantasy value, especially when they can catch passes. Some will talk about the offensive line having a significant contribution to running back production. That is true; however, that doesn’t mean a running back has to have a good offensive line to be productive. Nine of the sixteen teams in the lower half of Fantasy Outsiders run-blocking efficiency charts for Adjusted Line Yards were still top 20 running backs. If you’re drafting a running back with the first or second pick of a rookie draft, you want better than just top 20. Offensive line is crucial to be the top option in fantasy as we see eight of the top ten running backs having an offensive line with top 16 ALY.

When we look at the offensive line for the Lions, we cringe. They spent 2014-2017 outside of the top 20 ALY while spending the past two years ranked at 20. Something is different with the Lions, however. There might be a culture change in the works. In the past 40 years, the Lions have drafted two or more offensive lineman in the first four rounds just four times. Two of those times occurred in the past four years. Since spending a first-round pick on Frank Ragnow in 2018, we could be looking at a potentially dominant offensive line: former first-rounder left tackle Taylor Decker; 2020 draftees, guards Logan Sternberg and Jonah Jackson; the aforementioned Ragnow; and former Eagles tackle Halapoulivaati Vaitai who they acquired in free agency. This offensive line is one of the top units in the NFL in terms of draft capital, and on paper, it’s imposing.

Touch competition could be a real concern for Swift. Lions starting running back was also drafted in the second round by Matt Patricia just two seasons ago. He was thought to be one of the top, up and coming running backs; however, production has been hindered by his inability to stay healthy as he has only played in 18 of a possible 32 games. Meanwhile last year, he only averaged a .9% breakaway run rate (#52 in the NFL), a 22% juke rate (29th), evaded 3.4 tackles per game (24th), while averaging 4.3 yards per touch (too many to count (I tried three times and lost count every time)). So to sum it up, Swift will be competing against an inefficient, injury-prone running back. Even as bad as Johnson was, he still finished as RB 25. Imagine what Swift could do in that starting role.

Even if he gets third-down work, he could still be extremely efficient. Quarterback Matthew Stafford has targeted the running back the fourth-most in the NFL out of quarterbacks with over 800 passing attempts. If he can make running backs like Theo Riddick and Ameer Abdullah relevant, I think he can help turn Swift, with a newly revamped offense line, into a superstar.

Although CEH, Taylor, and Dobbins are thought to be in better situations we can’t dismiss Swift. The Lions scored 22 points or more in all but one contest while Stafford was healthy. If Johnson, with only a 22% juke rate and a 0.9% block rate, can be a RB2 while playing a full game, imagine where Swift could finish. I’m taking Swift ahead of CEH and Dobbins. You better believe not looking back.

Hit me up on Twitter @FF_Intervention, I love talking fantasy football. Listen to my podcast the Fantasy Intervention Podcast where I’m breaking down fantasy strategy and helping you win your league.