There is a new Judge in New York

Here comes the Judge!! New York Giants Hire Patriots Special Teams Coordinator Joe Judge as Next Head Coach and @Nick0629Nick takes a look at what it means for fantasy’ 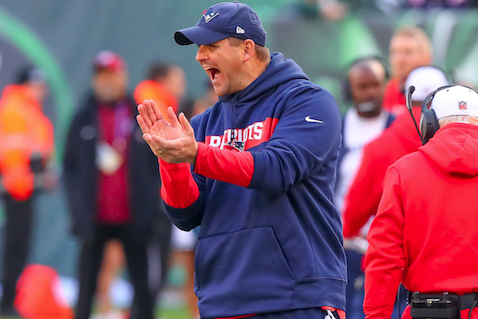 After posting a 9-23 record in 2 years, the New York Giants decided to move on from Head Coach Pat Shurmur. With an intriguing roster composed of Saquon Barkley and potential franchise Quarterback Daniel Jones, there are plenty of things to look forward to with this roster. As news broke that the Giants were requesting an interview with former Dallas head coach Jason Garrett things got interesting. Soon after it was reported that the Giants decided to hire New England Patriots special teams coordinator Joe Judge.

Who Is Joe Judge?

Judge is an interesting hire because he does not have experience as Head Coach or Coordinating the offense or defense. Since coming to the NFL Judge has spent his time coordinating Patriots special teams and adding wide receivers in 2019. Also, he does not have any experience playing in the NFL since he returned to Alabama after his college career to become an analyst for Nick Saban. It will be important for Judge to hire experienced coached to fill out his staff. Thankfully, however, he has had 8 years spent under coaching guru Bill Belichik which should give him some knowledge on how to effectively run a team.

The Giants drafted quarterback Daniel Jones to succeed Eli Manning leaving a potential franchise quarterback for Judge to work with. Jones finished as the QB22 for fantasy but will need to improve his ball security for dynasty owners to call him a regular starter week to week. I do not expect Jones to be playing at a Patrick Mahomes level this year but I would like to see significant improvement from the young signal-caller. In order to do that, however, the Giants need to improve their receiving corps.

This is the one spot for the Giants that I am not worried about. While Saquon Barkley did not provide that fire like he did last year he was still a 1,000-yard rusher. Next year will be a test to see if it was just a down year for Barkley or if it what we should be expecting from the stellar running back from now on. As far as backups go, Wayne Gallman was serviceable filling in for Barkley. The Giants should look for an experienced backup if they want to improve.

This is where things get interesting for the Giants. After a strong showing from rookie Darius Slayton, every other wide receiver is a question mark. Golden Tate is a serviceable receiver but at 31 years old is not the answer long term. Sterling Shepherd is a good wide receiver but has durability issues having missed 11 games since entering the league. Going into next year I would be looking to getting as many shares of Darius Slayton as possible and would shy away from the rest of the Giants receivers except for plug and play situations.

With one of the most promising tight ends in the league in Evan Engram. The Giants should be squared away for years to come. And with another offseason to mesh with quarterback Daniel Jones, I do not see Engram being an issue next season and should provide the help needed down the stretch. The main question will be who the OC is going to be that will ultimately determine if Engram is used more like a receiver or if he will be like O.J. Howard and have a down year due to lack of use.

This will be the coaching hire to watch this season due to Joe Judge’s lack of experience. With some young talent and a roster thirsting for success, there will be expectations this year, but it will require some improvements to avoid a short stint as head coach. I do not see the Giants having a 10 win season next year, but could see them improve by 3-4 wins. Even though Judge, is not received with the same hype as a Brian Flores or Josh McDaniels I see him bringing the tools needed for success so he should be given a long leash to grow into the position.