Ronald Jones and Sony Michel have owners reeling! @Josh_ff tells you what to do with these two backs! 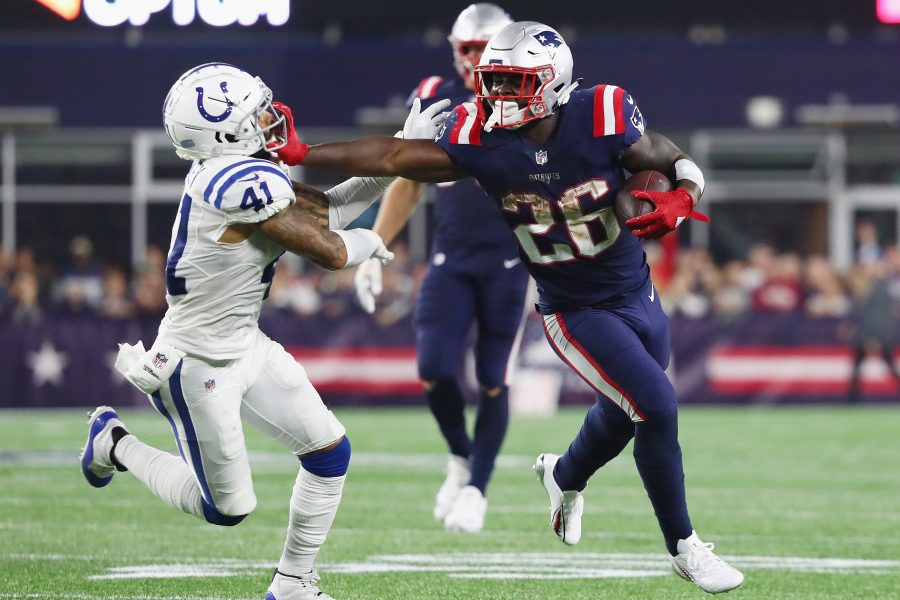 “Third Year Breakout” is a term that goes hand-in-hand with wide receivers and tight ends. For running backs, it’s not something that happens all too often. Running backs are capable of coming into the league as a rookie, and making an impact for their team immediately. Some great running backs are heading into their third year that could still be worth a buy-in dynasty. Today I’m going to look into two who’s owners might be discouraged or concerned about the landscape of their NFL Teams. Juxtaposing Ronald Jones and Sony Michel is undoubtedly an interesting exercise. Should we buy either, and at what cost?

The rookie display put on by Ronald Jones in 2018 was abysmal. Anyone who says otherwise is off their rocker. Going into the 2019 season, most owners had decided their first-round pick was already fried and thrown in the trash. 23 carries, 44 yards, and a touchdown would have been a disappointing game to his owners. These stats over an entire season made Ronald Jones less relevant than Brandon Bolden.

I want to focus on the years 2014 to 2017 (2016 is excluded as Brady didn’t play a full season). In these three seasons, Brady had three of the following four weapons for at least half of the season – Rob Gronkowski, Julian Edelman, Brandin Cooks, and Danny Amendola. Even in these seasons, with these weapons, Brady targeted the running back 22.9% of the time. Beyond the increase in quantity, Brady’s targets should be of a higher quality than those provided by Jameis Winston or Ryan Fitzpatrick. Ronald Jones is far from a natural pass catcher, but he’s shown he’s at least capable. If he improves his pass blocking, he could see the field often early in the season.

The biggest concern with Ronald Jones in 2020 is backfield companions. Peyton Barber is gone, leaving Ronald Jones and Dare Ogunbowale alone. Tampa Bay is going to draft a running back in 2020. The question surrounds the capital they’ll be using on this running back. Let’s take the history of Jason Licht and Bruce Arians to predict their running back draft capital.

Although many have the Buccaneers taking a running back early, the decision-makers tendencies don’t agree. Since becoming the General Manager of the Buccaneers in 2014, Jason Licht has only drafted three running backs. Only 2 of these were made on the first two days of the draft. Ronald Jones, and Charles Sims. Jones was an early second-round pick, while Sims was an early third-round pick. In 5 years with the Arizona Cardinals, Bruce Arians drafted four running backs. While that’s a relatively high amount of running backs, only David Johnson was drafted in the first four rounds of the NFL Draft. Even then, Johnson was a mid-third-round pick. This could be the landing spot for the likes of Zack Moss, but if he’s not there, the running back landscape turns into satellite backs with pass-catching upside. If they add someone like Chris Thompson late in free agency, this would be great for Ronald Jones’ safety.

I have one last thing to mention here on Bruce Arians. Let’s go back to when the Cardinals drafted David Johnson in the third round. Even with the draft capital and talent of David Johnson, Arians continued to roll with the veteran Chris Johnson for the first portion of the season. It seemed clear David was the better Johnson, but Arians still gave Chris more carries in 2015.

While Ronald Jones is gaining the GOAT quarterback, Sony Michel is losing him. As of the writing of this article, the quarterback room in New England is blurry. With Cam Newton and Jameis Winston unsigned, the Patriots continue to roll with Jarrett Stidham and Brian Hoyer.

Bill Belichick wouldn’t enter the 2020 season without some a plan. Many are viewing this offense as a run-first offense going into the season. It certainly looks that way, but Sony still has an uphill battle.

After flashing at the end of his rookie season, Michel’s 2019 season was lackluster. Michel defied the stigma of his degenerative knee and showed up to all 16 games. Although he was on the field, he was inefficient – averaging 3.7 yards per carry. Michel saw the 10th most carries in the NFL, but still finished outside the top 24 in PPR formats. There was hope around the NFL that Sony could get involved in the passing game, but he accumulated only 20 targets in the regular season, which he turned into 12 catches for less than 100 yards.

Digging deeper into the Patriots 2019 season, we’ll see New England had 42 offensive touchdowns (good for 13th in the NFL). The loss of Tom Brady will lead to regression for the offense, and they’ll likely finish in the bottom half of the league in touchdowns. We’ve seen this happen before when Peyton Manning left the Colts. In 2010, the Colts finished as the 5th highest-scoring offense. While Manning missed the 2011 season, the Colts finished at 28th in the same category. While a drop of 23 spots is not possible, we have to expect some fall from the offense.

So what does this mean for Michel if the Patriots offense is in the bottom half of the league? Of the top 24 running backs in PPR formats last year, 13 were on the bottom 16 offenses. Of these 13 running backs, only 3 had less than 45 targets in 2019 (Jacobs, Mack, and Montgomery). They finished the season at 21, 22, and 24, respectively, and none had the competition in the backfield that Sony will have in 2020. Running backs typically can overcome poor offenses through receptions, but Michel has yet to show anything to make us believe he could.

The Cast of Characters

James White will be on the roster at the start of the season, and he may be joined by Rex Burkhead, though there’s less certainty around his name. Damien Harris was drafted in the 3rd round of the 2019 NFL Draft and should see the field in 2020. If the Patriots used 3rd round capital on a running back in 2020, the Sony shares would be selling like crazy; instead, many have forgotten their 2019 investment, and hold hope that Sony will continue to be the guy.

If you’re a Sony Michel owner, I advocate moving him ASAP. Try to sell other managers on the fact the Patriots will move to a run-first offense. Convince them, White isn’t a between the tackles back, and the offense will run through Sony. Take a second-round pick for Sony. As a Patriots fan, this feels terrible to say, but if I could sell Sony for Ronald Jones + anything, I’d do it.

Owners of Ronald Jones and Sony Michel were hoping for more when they drafted them. Neither of these backs are known for their pass-catching prowess, and both will likely have some company in the backfield in 2020. I believe the competition for each will be similar. Both backs are running out of time in their 2-3 years window, so 2020 is the big year for their value.

Against the popular opinion, I don’t think Tampa Bay drafts a top-five running back in this draft. If they don’t, Jones is set up on an explosive offense. A late second-round pick could turn into a solid Running Back for a contending team. If they do draft one, Jones should still see work early in the season as the new back learns the Arians system. DLF Trade Finder has his value all over the place, so inquire with the owner. I wouldn’t give anything higher than a mid-second in non-Superflex leagues, but you might be able to get him for a 2021 2nd as a contender.

On the other side, Michel is locked into an offense surrounded by questions. While he played 16 games, his knee concerns cannot be forgotten, and Belichick has no issues moving away from someone who’s disappointed. Get out while you can.