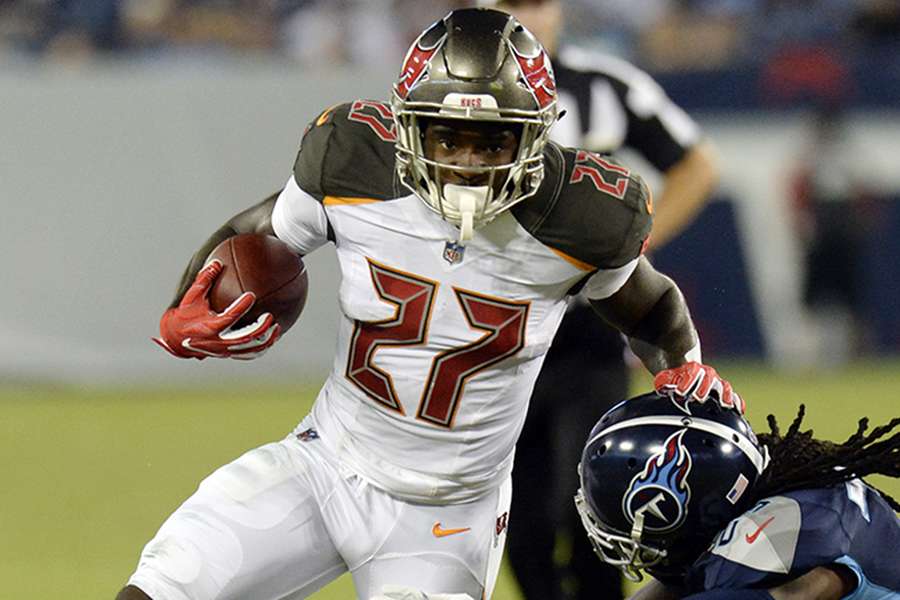 One of the biggest competitive advantages in fantasy football today is the ability to identify breakouts. This is especially important for running backs. This may come in the form of the day 2 rookie who starts his career strong or even the third year vet who finally finds his stride. One of the largest advantages to be had however, is being able to pick the one guy to emerge as the lead running back in the number of ambiguous backfields throughout the league.

This ability has led to the selection of league winners such as Jeff Wilson Jr., James Robinson, Philip Lindsay, and many others. In this article staff writers Jake Oliver and Dan Toomey will make their case as to why their guy will be the one to emerge.

Ronald Jones (Rojo) has the skill to be the lead rusher in the Buccaneers offense. After all, he was drafted in the second round. However, he’s been unable to completely take over the backfield due to fumble issues and lack of pass catching ability. Now, you might be wondering why in the world you take him as the lead back.

Well simply put, he’s set for the lion’s share of touches. Rojo’s still slated to get the majority of rushes. With the Bucs’ vaunted Offensive Line and Wide Receiver’s, no defense is going to stack the line against Rojo. This will open up multiple lanes that he can run through for decent gain.

He also scored seven touchdowns last season. Lots of TD upside. Don’t worry about Gio, he’s a back-up and is mainly there for receiving. Leonard will take some touches. Yet that just keeps Ronald Jones healthier for the season.

He was the RB16 last year and is being drafted much later right now. He’s talented enough to take any rush to the house at any time. He was the #1 running back in terms of most yards after contact on average at 3.0. He was also #8 in yards per rush at 5.1 yards.

He’s only 24 and the best could be yet to come. He won’t do great in receiving but he’s the running back to own in this league, especially in .5PPR leagues.

Leonard Fournette got cut by the Jacksonville Jaguars prior to the 2020 season. He signed with the Tampa Bay Buccaneers on September 2, 2020 just a week before the regular season kick-off. With a lack of any training camp or preseason with the team, Fournette took a while to learn the playbook and see the field. Fournette was unable to break even a 50% snap share until Week 7, despite having a 25+ point fantasy performance on only a 43% snap share in Week 2.

As the season progressed, Fournette saw an increase in usage. Eventually, he and Ronald Jones reached the point where they were splitting carries. It became fairly obvious that the more of the playbook he learned, more trust was given to Fournette in both receiving and pass blocking work.

Fournette was not the only one struggling to pick up the playbook, Tom Brady has been quoted saying “Midway through the year, I was still trying to figure out how to call the plays,” Brady said regarding the Buccaneers’ playbook. “I just read [the plays] off my wristband and tried to visualize what was going to happen.”

If we follow the money, we will see that the only running back under contract past this year is a 2020 third round pick. Tampa Bay is also operating in a very awkward window where the team will be pushing to compete as long as Brady is around. We can easily see a cleaning of house for the Buccaneers backfield this off-season where the only ones left standing are Vaughn and an unnamed 2022 draft pick.

The correct play is to grab yourself the cheapest entry into the Tom Brady backfield. Ronald Jones is currently going at pick 75, whereas Fournette is at pick 117. Take advantage of the price difference and get yourself a piece of this offense.

Wayne Gallman signed with the San Francisco 49ers on April 21, 2021. He was a fourth round pick by the New York Giants in 2017 and joins a particularly crowded running back room in San Francisco. Relegated to a back-up role most of his career, Gallman was the starter in 2020 after Saquon Barkley went down with a season ending injury. He took advantage of that opportunity and was able to average 4.6 yards per carry behind an offensive line that ranked 23rd in the league in run blocking according to PFF.

Wayne Gallman joins a fairly crowded running back room in San Francisco, but we can use that to our advantage. Kyle Shannahan has a rich history of turning even the most obscure backs into fantasy relevant assets.

Past examples of this include Raheem Mostert, Jeff Wilson Jr, and even Matt Breida. These are guys that are career journeymen that go off for week-winning weeks when plugged into the San Francisco zone running scheme.

And the best part about Gallman? He is practically free right now. According to Sleeper ADP as of August 17, 2021, Gallman is going at pick 291 in dynasty super-flex leagues.

In terms of actionable trade advice, a third round rookie pick will get it done in most leagues. That is way cheaper than the first you are currently spending to get Trey Sermon.

Trey Sermon is an Ohio St. running back that the 49ers drafted in the third round. He had a fantastic draft year for the Buckeyes which catapulted him into the NFL. Sermon’s got elite size for a running back as he’s 6’0 and 215 pounds. He has a sturdy frame that should allow him to absorb hits.

Of course, he seeks out contact and embraces defenders attempting to tackle him. He’s got solid vision and burst that allow him to rush through open holes rather quickly. He does need some work in the receiving dept.

Sermon landed on probably the best team for him. He’s a talented rusher and zone scheme rusher. Having Shannahan as coach and his heavy zone rushing suits Sermon perfectly.

However, this isn’t to mean he has zero competition for carries on the 49ers. The 49ers running back room has speedy but oft-injured Raheem Mostert, currently injured Jeff Wilson Jr., Wayne Gallman, and others.

Currently, I predict it will be a three-back room between Sermon, Mostert, and Gallman. Sermon should stand out rather easily so long as he can stay healthy. He’s younger and healthier than Mostert. He was drafted Day 2 which indicates the team will give him chances.

Wayne signed as a free agent, but he’s talented at catching the ball like Mostert. Sermon is going to do his thing and run the ball. Sermons’ going to be fed. He’s the only back on a long-term contract. Hence, if you’re playing dynasty, get yourself some Sermon and a piece of one of the best offenses in the NFL.

I don’t think anyone predicted before the season that the Rams running back room would be one of confusion. However, no one foresaw Cam Aker’s devastating Achilles injury either. Sadly, we need to accept that and move on.

With that said, the Rams seem to be going next man up philosophy right now. Sean McVay believes in Henderson. After all, he drafted him in the third round of 2019. Darrell started 11 games last year too. Hendo fits McVay’s running style which is why he took him.

Yes, Henderson has dealt with some injuries in the past. He has good size at 5’8 and 205 pounds. Yet, he’s the running back leading the room right now. It’s doubtful that 21’ seventh round pick Jake Funk or 20’ UDFA Xavier Jones do enough to take the lead role.

The Rams might sign a running back which hurts Henderson’s chances. However, that back would then have to learn a new system rather quickly unless it’s Gurley.

The only worry is that the Rams throw it more thanks to Matthew Stafford being there now. The Rams are not going to rush as much. That’s what logic says. Henderson is a capable receiving back which protects him in that regard.

Opportunity on the field leads to more fantasy points. Henderson is scheduled to get a massive opportunity. This leads to more potential fantasy points which is what You want. Get Henderson on your dynasty team for a decent price. Don’t sell the farm for him. He’s a great one-year rental for championship contending teams. I do think the Rams draft or sign another running back in the next off-season.

What if I told you the outcome of the 2021 Los Angeles Rams backfield was determined by Marlon Mack? Would you laugh? Well give me a second to explain. Last year, prior to the season, Marlon Mack went down with a torn Achilles. That is the exact same injury that took Cam Akers out for the 2021 season.

Achilles injuries are considered one of the worst for an explosive running back, but there have not been many recent examples of this. Modern medicine and sports rehabilitation has come a long way in the past half-decade. We must keep a close eye on Marlon Mack and observe how good he looks in the preseason.

If we can assume health for the bell-cow back in Los Angeles for 2022 and forward, we must now address what to do with the team in 2021. There is no way that the Los Angeles Rams go into 2021, a season with Super Bowl aspirations, with the current running back room they possess. Roster cut-downs come around in late August. Thus, do not be surprised if a big name running back is released from a current roster.

My personal prediction is that we may see Royce Freeman, Sony Michel, or Rex Burkhead on the move. Whether it is a signing or the trading of a late round draft pick, it would not surprise me to see one of them land in Los Angeles. I am not suggesting that these guys can be league winners, but simply that they will muddy the waters enough to keep all of them fantasy irrelevant.

The NFC has many convoluted backfields from which fantasy football players have to read the tea leaves. It can be hard to sort through the coach-speak during camp. Additionally, playing dynasty means you need to think long-term. Focus on who will help the team they play for the most. However, don’t worry if they are on a one-year deal as that could get extended. Plus, just trust your gut. The best player will win the most playing time out of the backfields room.

If you’re win-now, focus on the backs that will help their team and your team win this year. Don’t focus on long-term benefits as much. Go for the championship! After all, only one can be the winner. We will have an AFC Backfields soon to help you win your leagues.

Hope you enjoyed reading about the guys that we think will win their backfields in the NFC. We strive to help you win your league or give you long-term success! Feel free to give us a follow on Twitter if you want the latest news, moves to make, or movie trivia. Jake’s username is @DarthDbacks and Dan’s username is @DanT_NFL We are always happy to talk fantasy football, sports, life, or Star Wars with you in the Twitter-sphere!

May The Force Be With You…