In Superflex leagues the QB position is not only the most important it’s also the most expensive but today we take a look at 3 QBs that can be had for a value in Dynasty leagues. 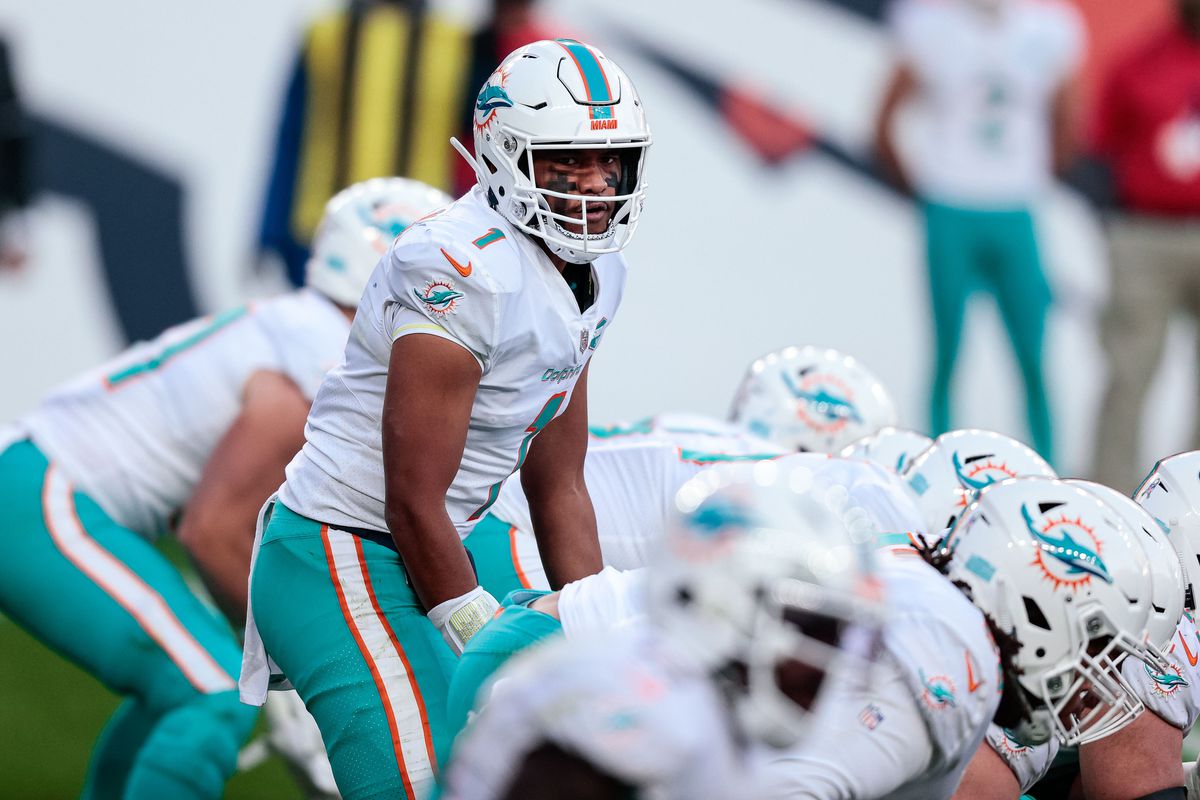 The Fantasy season has come to an end, but for dynasty players, it has just begun. The QB landscape is continuously changing in the NFL, and as we know, in Superflex leagues, the number one asset is the young QB. Now let’s take a look at three QBs you should be targeting in dynasty this off-season before their values rise to the top.

Tua had a somewhat disappointing rookie season if we compare it to other guys in his class, such as Herbert, Burrow, and even Jalen Hurts. The former Bama QB finished his rookie season with 1,814 passing yards, 11 TDs, and four INTs while adding three rushing TDs. Tua did show some flashes of brilliance in his rookie season. The highlight being his 248 yard, two TD performance in a win vs. Kyler Murray and the Cardinals. On the other hand, the Dolphins coaching staff didn’t show full confidence in Tagovailoa by pulling him in multiple games in favor of the veteran Ryan Fitzpatrick.

Tua has struggled to push the ball downfield at times, which was the ultimate reason behind his benching. We, as dynasty managers, have to remember to be patient with young QBs. Tua is just 22 years old, coming off a major injury he suffered in college. I believe he is the long-term answer at QB for the Dolphins and that alone is worth taking a shot on in dynasty leagues. The Dolphins are a young, up and coming team with a lot of draft capital coming up that they can use to build around the young signal-caller.

I’d be looking to send any mid-late 2021 first-round rookie pick for Tua in SuperFlex. I recently acquired him for the 1.07 in SuperFlex, which I believe will pay off big time in the future—writing off a young QB after his rookie season is bad business in dynasty. Now it’s time to take advantage and get Tua at what will likely be his cheapest. Tua has all the making to be a staple on your dynasty team for years to come. Invest now, reap the rewards later!

I know most dynasty players have given up on Carson Wentz, but I think that’s an incorrect move. Carson Wentz had an absolute disaster season in Philadelphia in 2021. He led the league in turnovers despite playing just 12 games before getting benched for Jalen Hurts. So, you may be asking yourself, why does this make him a buy? Is he done as a starting QB in the NFL? I’d say very confidently that Wentz will be a starting QB next season, whether in Philadelphia or elsewhere.

I believe Wentz is much better than what he put on the field in 2020. At QB22 in dynasty startups, he’s a steal for your dynasty team. Wentz is still just 28 years old, has shown MVP potential, and is at an all-time low value-wise. The rumor mill has been hot on the Wentz front, with many expecting the Colts to make a run at him in a trade that would reunite him with Frank Reich, with whom Wentz had his best season in the NFL. That would be the best-case scenario for the QB, but whichever team acquires him, it would be to be the future at QB.

In Superflex leagues, I’m not sure there’s a better buy than Wentz at the moment. I’d be looking to send an early 2nd round rookie pick to acquire him. Most managers with Wentz on their roster want nothing to do with him after this past season, and an early 2nd should be able to get the job done. Getting any young starting QB at that price in Superflex is a massive win. It’s time to take advantage and acquire Carson Wentz.

Staying in the NFC East with Giants QB Daniel Jones. Jones had a less than stellar second season in New York, finishing with 2,943 Yards, 11 TDs, and 10 INTs in 14 starts. He battled injuries to his best weapons as well as injuries of his own. The Duke product has shown he has fantasy upside due to his rushing ability. Jones racked up 423 yards rushing, which ranked seventh in the NFL for QBs. The hope is the Giants get a new OC in 2021 that uses Jones’ to his strengths with more RPO’s and designed QB runs. Jones is just 23 years old and has shown he can make every throw. He just needs more time to develop. Going into season three, with a second season with OC Jason Garrett, there should be improvement.

Danny Dimes is locked in as the Giants starting QB for the foreseeable future, making him a value in dynasty leagues in itself. He can be had for a late 2021 first in Superflex or even an early 2021 2nd at the latest. I’d be willing to pay anywhere from 1.10-2.02 range for Jones in SF. He has the rushing upside to be a top-10 fantasy QB, his value has a lot of room to grow, and he can pay off big time in the long run. Anytime you can get a young QB with upside, that has some stability as a starter, you have to take advantage in dynasty. Jones checks all the boxes of a great post-hype sleeper dynasty buy!

which QBs are you targeting in dynasty? Let me know on Twitter @andy_buckler ! Make sure you join the #NerdHerd so you’ll never miss out on the great things we have to offer! Thanks for reading!

Houston, we have a problem: The David Culley story
National Signing Day 2021 – Who Is Even Left?