Journey Brown & Noah Cain form one of the best RB Tandems in the Big10 if not the entire nation. Just how good can they be? @ReflipeWThenuz covers the players & their prospects for the upcoming season. 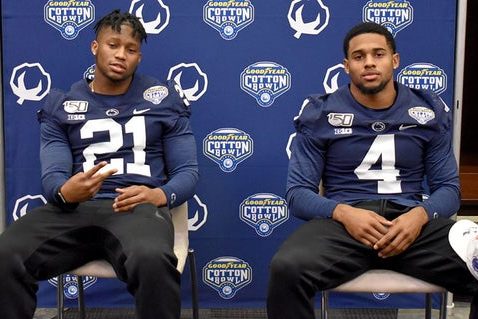 The Penn State Nittany Lions have traditionally been known as Linebacker U by the college football community. Successive generations of great linebackers found their way to Happy Valley and used it as a springboard to the NFL. In recent seasons Penn State has become a destination for some of the best RB’s in college football. In back-to-back seasons Penn State has had an RB go in the top two rounds of the NFL draft with Saquon Barkley & Miles Sanders.

Heading into the 2020 season, the team is once again chock full of talented RB’s. In fact, the team is so full of dynamic talent that the transfer of former 5-star RB recruit Ricky Slade has received very little attention. In 2020 the team once again added yet another 4-star recruit RB in Keyvone Lee out of Clearwater, Florida. However, there is little doubt that the team will be paced by the dynamic duo of Journey Brown and Noah Cain. For my money, they form the best one-two punch in the Big10 if not the entire nation. Let us look at this pair and see what 2020 looks to hold for the Lawn Boyz.

Amongst the Devy community Journey Brown is likely the top name on the Penn State roster. The 5’11 216 lb. RB burst on the scene in his sophomore season after a relatively light recruiting process. Coming out of Meadville, PA Brown was 247 Sports’ 51st ranked RB. The only schools to offer him a scholarship other than Penn State were Duquesne, Temple, and Syracuse. His light recruiting was especially curious, given he had the second biggest High School Football game ever to the tune of 30/722/10!!! No, that’s not a season, that is one single game in which he willed his team to a 107-90 victory. You can see the highlights below.

After touching the ball only nine times during his freshman year, Brown slowly emerged out of a crowded backfield. He eventually whittled a four-man committee down to a two-man rotation between himself and true freshman Noah Cain. From his stats below, Brown put on a show with the limited touches he saw in 2019.

When watching his game, Journey Brown runs with a style reminiscent of Reggie Bush. He routinely uses his superior athletic ability to bounce runs to the outside and dash for the endzone. You can see an example below of his ability to bounce the ball back against the grain and then cut upfield.

As I mentioned above, Brown slowly took hold of the Penn State backfield with his dynamic playmaking ability as the season progressed. One of the areas in which he excelled was catching the ball out of the backfield. He has displayed soft hands routinely being used in the screen game as well as running wheel routes out of the backfield. You can see an example of his receiving chops below.

One final area that Brown excels in is finding the endzone. The PA native managed to score 13 TDs on less than 150 touches. He unquestionably has a nose for the end zone and routinely fights for those extra yards to hit paydirt. Brown is worth the price of admission himself for the 2020 Nittany Lions. I will leave you with the play of the 2019 season, which capped Brown’s 16/202/2 line from the Cotton Bowl. Enjoy the highlight, and keep an eye out for Brown’s continued development in 2020.

As cliche as it may sound, Noah Cain is the thunder to Journey Brown’s lighting. Last season’s true freshman burst onto the scene during the annual Blue & White scrimmage in which he was the star of the 2nd team unit. In fact, he played so well in that live scrimmage that the coaches promoted him to play with the starters during halftime.

Before arriving in Happy Valley, Noah Cain was one of the top recruited RBs in the nation. One time looked upon as the top RB recruit in the entire country, Cain eventually fell to #6 in the class. He chose Penn State over some heavy hitters, including Texas, Clemson, Georgia, and others. Following his spring game performance last year, I wrote up an entire profile for Dynasty Nerds, which you can find here. The 5’10 210 lb. bruiser enjoyed a historic freshman campaign in which he broke Saquon Barkley’s freshman TD mark. You can see his freshman stats below.

Noah Cain runs with a style reminiscent of similarly built power backs such as Mark Ingram and LenDale White. He uses his low center of gravity and strong legs to continually drive his opponents. In his very first live-action game, he used said power to score his second TD of the game, which you can see below.

For a two-game stretch in early October, Noah Cain was one of the best offensive players in the Big10. The Nittany Lions rode their Freshman phenom to wins over conference rivals Purdue and Iowa. During each contest, Cain powered his way to 100-yard performances that highlighted his entire skill package.

Along with teammate Journey Brown, Noah Cain finished the season strong in the Cotton Bowl. While Brown set a Penn State Bowl record with over 200 rushing yards, Cain was no slouch with a 15/92/2 stat line. The two backs formed a perfect one-two punch and powered the team to a New Year’s Six bowl victory. Cain and Brown turned former 5-Star recruit, Ricky Slade, into an afterthought. Noah Cain is one of my favorite up and coming RBs in the Big10. Keep an eye on how this dynamic sophomore builds on his historic freshman campaign.

Penn State has been a team on the cust the last several seasons. Even in their Big10 Championship season of 2016, they were left out of the College Football Playoff. This year the team will seek to break through that glass ceiling. The loss of their dynamic WR K.J. Hamler, who left early for the NFL, means that the team will need that much more from the RB corps. Fortunately for them, they have the best pair of RB’s in the nation in Journey Brown and Noah Cain. Strap up your chin straps Nerds it’s gonna be a fun 2020 campaign.

Following the completion of this article, the college football landscape was drastically altered. The Big10 began the fireworks with this statement released below.

The Pac12 closely followed the Big10 in postponing its 2020 season. The situation may still be fluid with the Big12, ACC, & SEC vowing to play games this fall. Now for Journey Brown and Noah Cain. This could, unfortunately, spell the end of the road for Journey Brown in Happy Valley. He was already slated to be a big RB name to follow regarding the 2021 NFL draft. I cannot imagine he will be interested in any subsequent Spring season, so close to the NFL combine and draft.

As for Cain, if this postponement hold firm, he will be in line for a big workload when PSU hits the field again in 2021. He was one of the most electric freshmen in the nation in 2019 and showed a 3-down skill set that will allow him to flourish moving forward. There is still time for things to change before this fall, but as of now, we may never get to see the pair that broke records in last season’s Cotton Bowl Classic play together again. Keep your fingers crossed that things get better and stay safe out there.

Thank you for reading this article! Please be sure to join the #Nerdherd, so you don’t miss out on any amazing things we have to offer @Dynastynerds.com. You will get rankings, extra podcasts, and access to our rookie film room. For just a couple bucks more, you can get access to our revolutionary DynastyGM tool. So much for so little, why miss out on all the fun. Follow me @ReflipeWThenuz for more dynasty content and other musings.