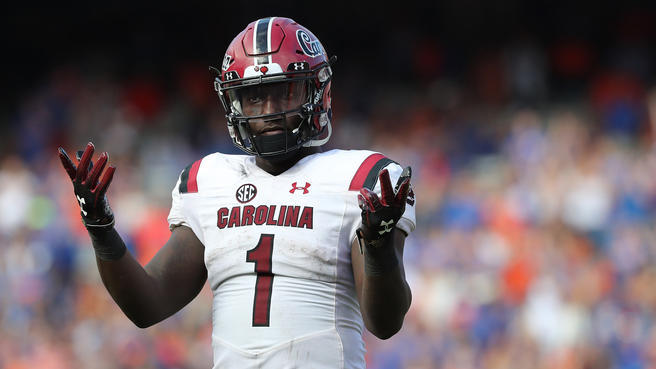 One of the issues many people have when examining rookies is evaluating rookies based on numbers. Some get caught on up on ‘I need the #1 guy!’ when #2 is near the same as one. Some years that is not the case, like last year with Saquon Barkley being far ahead of everyone else for fantasy purposes. This year, there is no clear cut #1 and players in this draft should be seen in tiers of players rather than a pure number. Let’s work through this year, newly released, Dynasty Nerds rankings. Follow the rankers here, here and here. I will include my full rankings below for those who care and throughout the article. All these ranks are pre-draft of course. Remember the rankings we are using as a guide are non-Superflex but I will add the QBs in as we go. Players within each tier should be similar and safe to draft at interchangeable points within the draft. They are essentially opinion or team need.

Before the draft I was thinking:

DK Metcalf – Seattle Seahawks. I didn’t believe in Metcalf. Not sure I still do but he couldn’t have landed in a better spot. I have said all along that he is Kevin White, but Kevin White never had Russel Wilson who is the perfect long ball QB for Metcalf. I think White will be the #2 WR on this team and will eat all season.

TJ Hockenson – Detroit Lions (All formats) He’s a stud. He’s landing spot is fine. Take him in the top 5 picks if you can.

Dwayne Haskins and Kyler Murray. Superflex only. These are your top 2 picks in Superflex. Round 3 in standard drafts.

Josh Jacobs – Raiders. I think he becomes the Raiders #1 RB. I am only including him in Tier 1 because if you are running back needy you may need to take him over the receivers, but I will probably treat him as the top of tier 2 in my drafts

N’Keal Harry – New England, Patriots. I really like him still. He and Jacobs are both in between tier 1 and 2. He is going to be very good, but the Pats always sign a handful of guys off the street it seems to play WR and become WR3s. Draft with caution.

A.J. Brown – Tennessee Titans. This may be the worst landing spot for anyone. Last year, after missing out on Nick Chubb and Derrius Guice after moving them down, I swore I would never move a guy down due to injury or landing spot but here we are. My former #2 overall player is now in tier 2 but I need to see that someone can get Brown the ball.

Terry McLaurin – Washington Redskins. The Redskins won the draft and the combo of McLaurin and Haskins. They are going to rack up fantasy points together for years. McLaurin is one of my favorite picks this year and if he starts falling, get back in the draft and get him.

Mecole Hardman – Kansas City Chiefs. Tyreek Hill will likely not be with the team soon and that’s up to you to decide if you agree or not. My opinion doesn’t matter on that in a dynasty article. I had never heard of Hardman before he was picked in Round 2 of the draft but he’s fast with good hands. He sounds perfect for Mahomes.

JJ Arcega-Whiteside – Philadelphia Eagles. I already liked him, and I like him more now. Stick him on your taxi squad and you will thank me next season when he’s a starter but don’t expect a ton from him this year.

Parris Campbell – Indianapolis Colts. I don’t think I liked anyone’s landing spot better. He is going to be an impact player and may move into my first tier soon. He’s a player on the rise.

Miles Sanders – Philadelphia Eagles and David Montgomery – Chicago Bears. While Montgomery does have a little competition, he should have every opportunity to win the job. He may end up as a 2 down back but he is so good you absolutely should take him in the middle of round 1. Sanders, on the other hand, has NO competition in Philly. Yes, I am aware there is another big name, big hype Running back in Philly, but they traded a 6th round pick for him and took Sanders round 2, Pick 53 so you tell me who they are more invested in. Buy on Sanders. I reserve the right to move these guys up or Jacobs down as I get more of a look at their situation.

Noah Fant – Denver Broncos. (All formats) I don’t like his landing spot but Flacco does like the Tight End. Fant needs to learn to block better. He should be good enough to take in the mid to late of Round 1.

Josh Oliver – Jacksonville Jaguars. (All formats) He should be going at the very top of this tier in TE Premium leagues, anywhere in the tier for other formats. He has a good shot to beat out Geoff Swaim and has a QB that can work the ball to the tight end.

Devin Singletary – Buffalo Bills. He has been drafted to replace McCoy for being a jerk and posting Avengers: Endgame spoilers. Well, not actually but it should be.  He will be behind McCoy but in all seriousness, McCoy’s time in the NFL is winding down and Singletary is in a great position to step in and step up for huge fantasy numbers. Currently, I have him just below Sanders and Montgomery, but I wouldn’t be mad at ya if you draft him above them.

Darrell Henderson – Los Angeles Rams. I need Rich to use his Crystal Balls and tell us if Gurley is really hurt or not. Henderson is worth the risk and may move up my list very quickly.

Alexander Mattison – Minnesota Vikings. I don’t like him as much as some of the staff but he’s good and if Dalvin Cook can’t stay healthy, he’s going to get work. If you own Cook, you should own Mattison late in round one or in round two.

Andy Isabella – Arizona Cardinals. The Cards really added to their offense and Isabella is going to go lower than folks drafted after his round 2 pick 62 spot but he’s the kind of player.

Hakeem Butler – Arizona Cardinals. The former top 4 pick for me plummets in the update after it took until round four for Butler to be picked up by the Cardinals, 2 rounds behind fellow rookie Andy Isabella. I am not sure what the NFL knows that we don’t but be careful drafting Butler too high.

Marquise Brown – Baltimore Ravens. Typically, any WR to the Ravens is bad news and I did move Brown down. I still like him because he shined with short, bubble type passes and he will get plenty of opportunities for this in Baltimore if Lamar can find him with the ball.

Irv Smith – Minnesota Vikings. (All formats) You should definitely be taking him by now in TE Premium but even in standard leagues, he is worthy of the pick here. I am not in love with Smith as a player and I don’t love or hate the landing spot. It’s just okay.

Diontae Johnson – Pittsburgh Steelers. The Steelers have a history of making WRs stars. Keep an eye on this one.

Jalen Hurd – San Francisco 49ers. The team has said he will be used as an RB/HB/WR/TE so that makes me very interested in him but there is still a ton of talented mouths to feed in San Francisco.

Jace Sternberger – Green Bay Packers. This isn’t a great landing spot based on what the Packers have done in the past but new head coach Matt LaFleur is known for using the tight end better. I may move him up but he’s solid in the late second or top of the third.

Damien Harris – New England Patriots. This is the most frustrating pick for me because it hurts Harris and Sony in my opinion. They traded up to get Harris so I expect them to use him. This is a hard one to place.

Bryce Love – Washington Redskins. Another great pick for the Redskins for their NFL team but unless there is more to Guice’s injury, I don’t see him playing a large enough role as long as Peterson and Guice are both on the team.

Dawson Knox – Buffalo Bills. Knox doesn’t have great hands and QB Josh Allen isn’t horribly accurate which isn’t a great combo but Knox only has the mediocre Tyler Kroft to beat out for the job. His chance of starting moves him up a tier.

Drew Lock – Denver Broncos (Superflex) Who knows how long Flacco will be in Denver or if Lock can handle the big lights but again if he’s starting within a couple of years you must draft him.

Ryan Finley – Bengals (Superflex) Again, we don’t know how much Andy Dalton has left. Finley could get a shot soon or not but could be worth a late pick in Superflex.

Kahale Warring – Houston Texans. He’ll start as the backup to Jordan Thomas. He can be someone who makes a difference in 2 to 3 years. Worth a draft spot here.

Drew Sample – Cincinnati Bengals I’ll be honest, I need to do more research on Sample and I may move him up because he was taken in the 2nd round and is only behind the oft-injured Tyler Eifert and backup C.J. Uzomah. If he moves up the depth chart, he could move way up my board. Stay tuned on him.

Miles Boykin – Baltimore Ravens. ARG ANOTHER GOOD RECEIVER TO THE RAVENS. This is another frustrating pick. He may work out but he’s a risk now.

Will Grier – Carolina Panthers. I am not sure he is draftable in any format since Cam isn’t going anywhere any time soon. I like Grier but I can’t see anywhere I will own him.