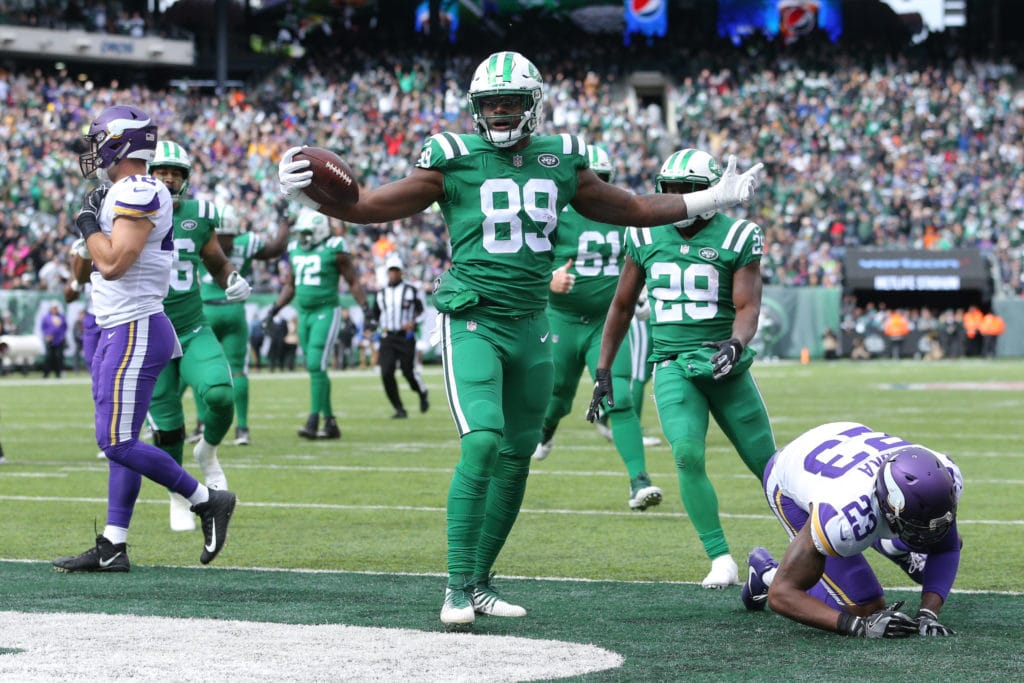 Much is made of the developmental period Tight Ends generally require as they transition from college to the NFL. Often quoted as 3 years, but in fact, history suggests 1-2 years is about right. A number of the current big names showed significant development in their first year, either breaking out as Rookies or clearly by their 2nd year (Gronk, Kelce, Ertz) and more recently Kittle and Howard (prior to injury) both clear TE1s by their 2nd season.

As the 2018 season begins to draw to a close, now is a good chance to check in with some of the current Rookie Tight Ends and try and identify who we may still be able to buy at an affordable price before they take the next step forward.

Most five round Dynasty Rookie drafts would have seen five or so Tight Ends taken last year (Gesicki, Goedert, Hurst, Andrews, Ian Thomas)… however, already, a number of once under-the-radar Rookie TEs have started to emerge.

Goedert and Andrews feel like they are on the right trajectory – both have had to battle to get their targets, but will finish the season in-or-around TE2. The current owners of these players probably invested relatively high draft capital, so it would take a bit of an “overpay” if you were to secure their services.

The below Twitter poll gives a hot-take on the 2018 rookie TE class.

Rookie Tight End check-in. If you had to take one now – who’d you pick? “Other” includes Herndon, Ian Thomas, Hurst etc. Comment on who, if you go “other”! #dynastybargains @DynastyNerds

Bear in mind that Gesicki was the number one tight end 14 games ago. It appears that Dynasty owners are now sticking with talent over situational concerns (a good lesson to remember for future rookie drafts!).

None of the question marks around Hurst as a Fantasy asset pre-season have been answered; hard pass from me.

Mike Gesicki’s jaw-dropping performance at the Combine in February skyrocketed the Penn State product’s value. However, Fantasy owners expecting an immediate return will have been severely disappointed by his output this year. Miami’s passing game hasn’t exactly been electric and Gesicki’s value has taken a hit as a result. Gesicki didn’t have the most prolific college career, but the physical attributes are unquestionable and he has shown reasonable hands in his rookie year. It’s worth seeing if you can use this slow start to pick up Gesicki at a cut price.

Need a reminder? Check out @dynastyjon’s Gesicki breakdown from the start of the year!

[**OBVIOUS ALERT**} Ian Thomas’ opportunities this year have correlated exactly with Olsen’s injuries, evidenced perfectly by his 11 targets in Week 14 (with Olsen absent). With only 210 yards and no TDs to date, Thomas’ price tag should still be low enough to snag him on the cheap. With Olsen’s retirement feeling imminent, and Cam’s affection for Tight Ends (…well, TEs and now McCaffery) 2019 could provide the opportunity for Ian Thomas to fully establish himself.

Firkser had already begun to carve out a role in the Titans’ offense; however, the loss of Jonnu Smith (on top of Walker at the start of the season) will present an earlier-than-expected opportunity for snaps and targets – particularly, if Tennessee makes post-season. Firkser has caught 16 balls on 16 targets for 201 yards and a TD, with inviting games against Giants and Redskins to come. Firkser should be added in all leagues.

Currently the top scoring rookie Tight End, Herndon seems to be (rightly) on a lot of people’s radars now – if anything, dare I say, his price might be a tad over-inflated… so perhaps not the best time to buy. Hopefully, the remaining Jets games will pass by without note and Herndon’s recent successes will fall out of people’s memories as we all start becoming Fant-atics of this new draft class!

I wouldn’t throw out an offer now; personally, I’d wait and try to get him added into another deal later. A 2nd is probably fair value – but I think you will be able to get him for cheaper as we move deeper into the off-season.

For a late round draft pick, going into a muddled Texans depth chart (including another rookie, Jordan Akins, taken three rounds earlier), Thomas is showing the sort of progression that is worth taking note.

Having already bagged four touchdowns and gaining a rapport with a young QB, signs are pointing up for JT. He is still only 22 (four years younger than Akins), so the less-than-ideal situation with Nick Griffin and Akins is not a long-term worry.

For me, Thomas is a buy-low and hold. Thomas’ targets have only modestly increased over the past couple of games and the Tight End’s yards are nothing to write home about, which is why you may still be able to get him for a bargain. The current owner almost certainly got him for free, so any pick will be a profit for them. I’d start with a 4th & 5th – but be willing to go to a mid-third; too early to invest anything more than this.

Not really on the fantasy radar pre-season, Dissly was widely expected to be a blocking tight end after the Seahawks invested a 4th round pick. However, he burst onto the scene with 147 yards and 2 TDs across his first two games of the year, before picking up a knee injury soon after and being confined to IR since. For me, this is too small a sample size to get overly excited about. Fine, as a stash, or if you get him thrown in on another trade – but I wouldn’t recommend paying any notable draft capital at this point.

3 wide receivers to stash in deep rosters
What Now