Who’s really number one? Derwin James or Jamal Adams? Could it be somebody else? 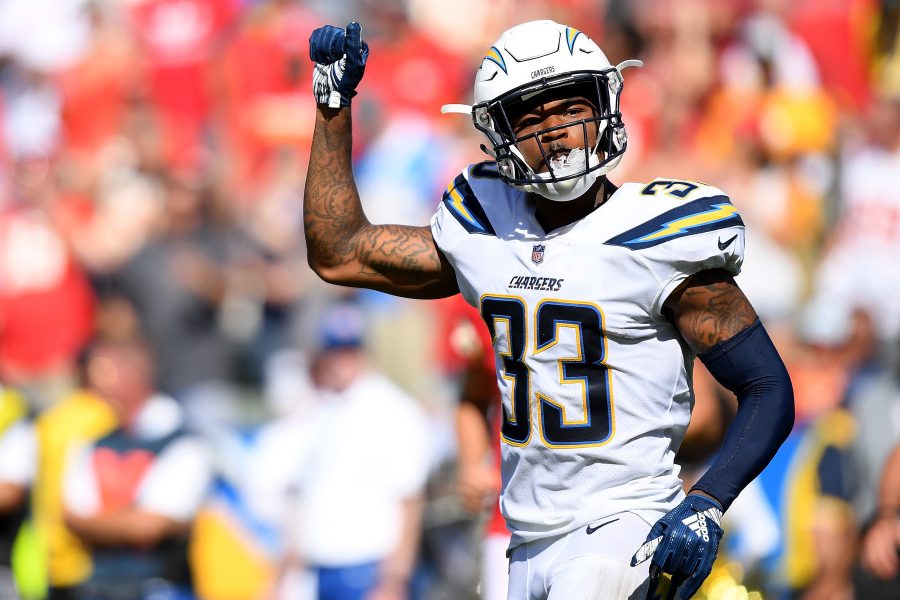 We’ve had the positions all over the board. First, it was the defensive line, which is top-heavy. Then I went onto linebackers, which has a lot of depth. Now it is time to rank the defensive backs. I think the defensive backs are probably the most well rounded of the three groups. It is deep, and you can make an argument of the top 20 defensive backs being interchangeable to a point. Yes, I could probably rename the article just top 10 safeties, since there are no cornerbacks in my top 20, let alone top 10. Cornerbacks for fantasy are much different than in real life, but that’s a discussion for a different time! Onto the main event.

Everywhere you look on Twitter, it seems that the top dynasty defensive back is either Derwin James or Jamal Adams. Which, honestly, is fine by me. Everybody in tier one could vie for that top spot, and to me, James and Adams are very close and wouldn’t be opposed to Adams being first.

Derwin James rocked his rookie year amassing 105 combined tackles, three interceptions, 3.5 sacks, four tackles for a loss, and six quarterback hits. However, his sophomore campaign was cut short by an injury in the preseason. He played in only five games, but still had 34 tackles, three tackles for a loss and one pass deflection. James can play pretty much everywhere on the field, which gives him tremendous fantasy value on both big plays and tackles.

I held off on writing this article in case Jamal Adams got traded, well, as most of you probably know, it finally happened. The Seahawks swooped in and made a huge splash. They have been missing that piece since Earl Thomas. Like James, Adams can play all over the field, which makes these two players very close in the rankings.

Budda Baker had a spectacular year in 2019. He was the number one scoring defensive back last year. The Arizona defense was one of the worst in the league last year, attributing to Baker’s stats. He finished the season with 147 tackles, seven tackles for a loss and six pass deflections, however, Baker didn’t have any interceptions and only 0.5 sacks. The Cardinals did add some significant help in the draft with another versatile player in Isaiah Simmons. Baker could take a slight step back from his 2019 stats, but he still will be a top 5 defensive back.

Landon Collins will round out tier one. Collins has been very consistent since he joined the league in 2015. Over the past five years, Collins has had over 100 tackles in four of those seasons. Unfortunately, his big plays have gone down, only amassing one sack and zero interceptions over the past two years. Even with the lack of big games, Collins still gets himself into the top of the league and one of the most coveted defensive backs.

Jabrill Peppers‘ name is one of those that have shot up rankings a lot over the past year. In 2019, Peppers produced almost identical numbers as he did with the Browns in 2018. The only difference? He did that in 11 games with the Giants and 16 games with the Browns. Peppers’ value has gone way up by being able to play all over the field. He is just out my tier one, but I wouldn’t be surprised if he makes that jump into tier-one after 2020.

Justin Simmons is another who has shot up ranking boards. He has put up substantial numbers over the past three years, racking up 259 tackles, nine interceptions, and 24 pass deflections (15 just in 2019). Is it possible to add another guy to tier one? I don’t see why not. The Broncos didn’t change much on defense, except for losing fellow defensive back Chris Harris. They will get back linebacker Bradley Chubb for 2020, which could boost Simmons’ stats and possibly his tier ranking.

Keanu Neal may scratch some heads at why he is in the top 10. Yes, he has had injuries over the past two years (ACL and Achilles); however, his first two years in the league showed what he could do. Neal had 222 tackles in those years. When he’s healthy, he a top 10 safety, and that’s what I’m baking on. If Neal can return to form, he will be a steal in drafts. I’ve seen some start-up drafts where he is going much later or even undrafted in some cases.

Yes, I know what you are thinking, another injured guy in the top ten? Yes, it is true. Abram only played in one game last year and had five tackles to his name. He is a hard-hitting defensive back that isn’t willing to get his jersey dirty. Abram’s previous two years at Mississippi St. show what kind of player he is. He is both an excellent cover safety and a force in run support. Over his junior and senior years, Abram had 170 tackles, 14 tackles for a loss, three sacks, two interceptions, and ten pass deflections.

Taylor Rapp wasn’t supposed to start his rookie year. The Rams has John Johnson and Eric Weddle manning the back, but when Johnson went down with a shoulder injury in week six, it was Rapp’s time to shine. Rapp finished the season with 100 tackles, two interceptions, three tackles for a loss and eight pass deflections. With Weddle now retired, Rapp will start alongside Johnson to form one of the best safety duos in the league. The Rams also lost inside linebacker Cory Littleton in the offseason, so which mean more of an opportunity for Rapp.

Here is the final guy in my top ten defensive backs. Jessie Bates may not be a household name to some, but he should be. Bates has done nothing but produce in his short stint in the NFL thus far. He has played in all 32 games while racking up 211 tackles, 16 pass deflections, and six interceptions. What is going to happen now that the Bengals have signed Vonn Bell? Well, Shawn Williams sounds like he will be playing more of a safety/linebacker hybrid role with Bates and Bell roaming the back. Bates’ stats could go down some with some significant additions they did in the NFL draft. Still, I wouldn’t pass on him as he will still produce.

Jeremy Chinn got a lot of hype during the draft process. He is starting to receive even more after the Panthers traded up at the end of the second round to snag one of the top defensive backs in this draft class. The Panthers had a lot of turnover on defense this offseason and should see Chinn take the starting safety role alongside Tre Boston.

Xavier McKinney will be playing alongside Peppers in New York and should make an impact almost immediately for the Giants’ defense. I mentioned Johnson above and should be a starter alongside Rapp.

Fitzpatrick blossomed after he was traded from Miami to Pittsburgh, giving the Steelers a presence since Troy Polamalu. And of course, we can’t forget the older man of the bunch. Harrison Smith has only missed six games over the last six years and continues to rack up the fantasy points. Since he is 31 years old, you can get him a bit later in drafts and possibly considered a steal!

Thanks for reading and I hope you enjoyed the article. You can find me on Twitter @ejh1528. Feel free to shoot me any IDP (NFL or Devy) questions you may have. You can also check out the IDP Devy Podcast, which I co-host. You can see my previous Dynasty Nerds article here and my Devy IDP articles here at IDPGuys.org. Are you a #NerdHerd member yet? For just $2.99/month, you get access to rankings, extra podcasts, the buy/sell tool, and more on the way.