With the 2021 Draft come and gone, many of us are itching for more. Here, @DevyCramps dives into the top fantasy prospects for the 2022 Draft class. 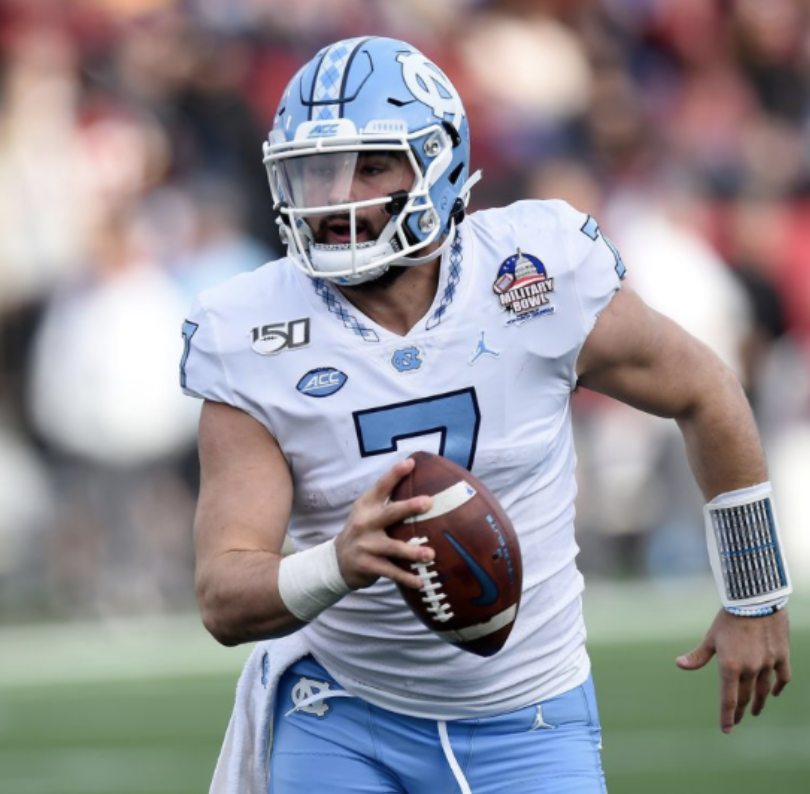 The 2021 NFL Draft has come and gone. Many of us, especially those who play devy, have turned to the 2022 class and beyond. Here, we take an early look at the top 22 fantasy prospects for the 2022 NFL Draft. These rankings are based on PPR, SuperFlex, Tight End Premium formats.

Howell has tossed 68 TDs and 14 INTs in his 25 games as a starter. He has one of the prettiest deep balls in the nation, showing plenty of arm talent and the mobility to escape pressure. He may face a challenge this year after losing 4 of his best offensive skill players to the draft, but right now he is the best bet to be QB1 off the board in next year’s draft.

Hall blends the frame of a workhorse back with the quick feet of a smaller, COP style back. He’s already a pretty refined runner with strong vision and great balance. He’s also shown plenty of ability as a pass catcher, logging 23 catches in each of his 2 seasons.

It was tough to put Rattler down at 3 because of his talent. He has a rocket for an arm and shows a great ability to extend plays and make off-platform throws, a trait that is becoming increasingly important in the NFL. However, his spotty accuracy and questionable decision making makes him pretty risky.

Spiller possesses the size, athleticism and vision of a quality NFL back. His play speed isn’t the greatest, and he isn’t the type to stuff the highlight reels. However, he runs hard with good vision, has excellent contact balance, and is a highly capable pass catcher.

The 2022 WR class looks to be crowded at the top, making it difficult to rank these next few players. Wilson gets the WR1 spot because of his ridiculous fluidity as a route runner. He can make defenders look silly with his ability to turn on a dime and explode out of his breaks. He shows strong hands and excellent body control at the catch point as well.

David Bell exploded onto the scene in 2019 when Rondale Moore went down to injury. In the last 9 games, he compiled 905 receiving yards and 6 TDs. He improved his per game numbers in 2020, posting 625 yards and 8 TDs in 6 games. Bell’s basketball background shows up on his tape, as he has excellent timing, strength, and technique at the catch point, boxing out defenders and hanging on through contact for some difficult catches.

Burks measures in at 6’3”, 230 lbs – but what sets him apart is the size of his hands, as he needs to have 5XL gloves special ordered for him. He’s a natural hands catcher that has an excellent ability to high point the ball given his size and vertical. He’s also very difficult to bring down after the catch, even flashing ability as a kick returner.

George Pickens is arguably the most talented receiver in this class. Unfortunately, he suffered an ACL injury that will require surgery, and could miss the entire 2021 season. He may have shown enough in his first 2 seasons to declare, and he may pan out as an excellent player in the NFL, but until we learn more about his recovery, he’s too risky to rank above the other top talents in the class.

The smaller Notre Dame back broke out with an impressive 2020 season in which he compiled 1438 scrimmage yards and 14 TDs in just 12 games. He established himself as one of the top backs in the class during an electric 2OT game vs. Clemson in which he ran for 140 yards and 3 TDs, including the game winner. Kyren is a tough and versatile back that can run between the tackles, catch passes out of the backfield, and play in pass protection.

John Metchie III is the next in a long line of top Alabama WR prospects. Metchie III is not the biggest or most explosive, but he’s a versatile athlete that can challenge the defense at all levels of the field. His focus and strength to catch the ball in traffic is outstanding. Don’t be surprised if Metchie III shoots up draft boards as he takes over the WR1 role in Tuscaloosa.

Olave made a bit of a head scratching decision to return to Ohio State when he likely would have been a Day 2 selection in the 2021 Draft. Olave wins with his high football IQ and separation ability. His skills at the catch point are a bit lackluster, but his ability to separate at all levels gives him a pretty high floor.

Zamir White, the next Georgia 5-star RB, tore his left ACL as a freshman – 1 year after tearing his right ACL in high school. He took a while to get up to speed (literally, as the track athlete looked slower than usual at first), but he finally put things together towards the end of the 2020 season. He brings an ideal blend of size and explosiveness to his game. Look for him to rise up the boards as he runs through SEC defenses in 2021.

Kedon had an outstanding true freshman season in 2019 in which he tossed 30 TDs. He took a step back in 2020 after suffering a shoulder injury, seeming more panicked under pressure. He has NFL level accuracy, can extend plays outside the pocket, and can make full field reads. Should he return to his freshman form, he will solidify himself as a first round pick in the 2022 NFL Draft.

Gray doesn’t yet have the body of an every-down back, but he has the skill set. He’s an instinctive runner with excellent short area burst, and has make-you-miss ability in the open field. After underperforming a little bit in Tennessee, he transferred to Oklahoma, where the change of scenery may help him bump his stock up in 2021.

Drake committed to USC as a 2-sport athlete, and his basketball background is easy to see when he plays football. After taking a step forward on the gridiron in 2020, he chose to leave basketball and focus on football. He has a big frame and excellent jump ball skills, boxing out defenders and snagging off-target passes easily. He’s a very tough runner after the catch as well.

Justyn Ross was a projected first round pick in the 2021 Draft. Then, he missed the season and was at risk of never playing football again. Now, he’s expected to be back as Clemson’s #1 WR, looking to prove that he’s healthy and that he can still ball in order to get his draft stock back up.

Ealy is a small, but talented back for the Rebels. He’s shown a dynamic skill set in his 2 years of college ball, as he has caught 35 passes for an average of 9.3 Y/C and adds some value as a kick returner, all on top of being an efficient runner. Should he add some weight without losing that explosiveness, he could prove to be one of the top RBs in the class.

When Marshawn Lloyd went down to an ACL injury, Harris stepped up. He took 206 touches for 1297 yards and 16 TDs from scrimmage. He’s a punishing downhill runner, using his big frame to bounce off tacklers. He’s also shown enough ability as a pass catcher out of the backfield. Some are fading him because of Lloyd’s return, but this is Harris’s backfield to lose.

The former 5-star recruit had a short and disappointing run at USC which ended in an ACL tear at the beginning of the 2019 season. He then transferred to Georgia, where he started 4 games in 2020, and lit it up in some of those games. Daniels still has plenty of talent, and could easily become one of the top QBs in the 2022 Draft with a strong 2021.

Another former 5-star recruit that tore his ACL as a sophomore, Haselwood is looking for a breakout season catching passes from Spencer Rattler this year. He was the #1 ranked WR in his class, and while he hasn’t yet lived up to that hype, he’s shown flashes in a few games and practices. The athletic upside is too hard to ignore.

Verdell was once considered one of the top backs in the 2021 Draft class. Then he had a disappointing, injury-riddled junior year. If he is able to stay healthy and build off his freshman and sophomore seasons in which he compiled 2,678 yards and 20 TDs from scrimmage, he could cement himself as a Day 2 pick in the 2022 Draft.

Corral is a volatile player, but talented enough to just make this list. He started 2020 on a tear, throwing for 1,080 yards and 9 TDs to just 1 INT in his first 3 games, including matches against Florida and Alabama. He followed that up with 8 interceptions in his next 2 games. The next week, he completed 91.2% of his passes for 6 TDs against Vanderbilt. His natural arm talent and mobility gives him solid upside, but he has a lot of room for improvement.