Running back handcuffs are an important addition to all fantasy teams. @SemTexMex93 looks at his top five options. 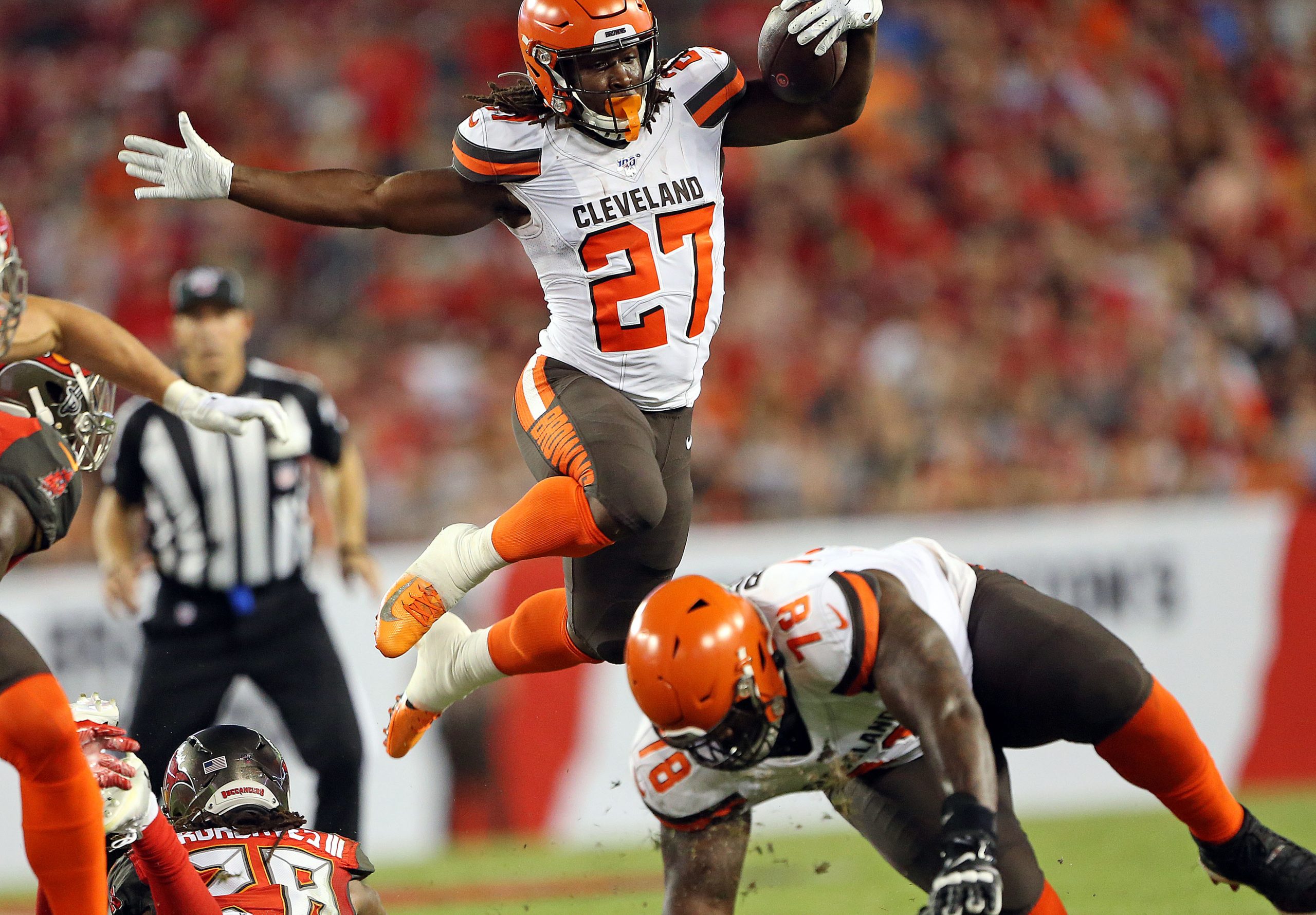 What is a Handcuff?

In fantasy football, a handcuff is described as a running back who is the primary backup to the starter. Now backups are usually not picked up until later rounds, but they are a necessity to have on your bench. Fantasy owners who grab their running backs early tend to grab that running backs’ backup as insurance in case of injury. Some fantasy owners grab other players’ handcuffs to reap the benefits of injury or leverage in a trade. Overall, acquiring handcuffs is an excellent strategy to have if you’re playing fantasy football, and in championship weeks, those moves could be key to victory.

Throughout his career, Jamaal Williams has been a consistent handcuff to the starting running back. Williams’ career averages are 125 carries, 496 yards (yds), and 2.5 TDs on the ground. Williams averages 30 receptions(recs), 240 receiving yds, and 2 TDs on 38 targets. Last year Williams was an excellent complement to Aaron Jones and produced when called upon. This led to him getting a two-year, $6 million deal with the Detroit Lions.

(Stats on this table are from PlayerProfiler.com)

Jamaal Williams was brought in to Detroit to help take some of the workload off D’Andre Swift. This year, the Lions are starting their rebuilding process. They seem hopeful that Swift is going to be the catalyst for future success. So to ensure they have Swift for the future, they brought in former Packer, Jamaal Williams. Williams, a talented back in his own right, draws comparisons to Swift’s Dual-threat style at running back. Both seem to be patient runners who allow their offensive line to open up holes for them. I put up this table to show the similarities between the stablemates.

This year is going to be interesting for Drake with the Las Vegas Raiders. Last year as the starter for the Arizona Cardinals, Drake put up 955 yds and 10 TDs on 239 carries while catching 25 balls for 137 yds. Drake will be stepping into a backup role with the Raiders in 2021, but Gruden seems to think Drake’s role will be bigger. On an episode of The Raider Report, Gruden talked about running backs in the past getting more opportunities due to injuries and spoke on wanting to get Drake more involved. Gruden’s main game plan for Drake was stated as ”So we’re going to try to circulate the touches Kenyan Drake’s way. He’s a guy that’s made big plays.”

Kenyan Drake is going to be an interesting handcuff this year. He’s going to get plenty of touches and will be an elite sub if Jacobs is injured. Drake is someone I suggest picking up whether you own Jacobs or not. Below I have put together a projection table based on a percentage of carries. In either situation, Drake was projected to have a good year for a backup RB.

(This table is a projection based on last year’s stats. I averaged it out for 17 weeks and gave 10% to Raiders running backs not named Josh Jacobs and Kenyan Drake.)

Gus Edwards has always been a backup for the Baltimore Ravens, starting 13 games in his 3-year tenure with the team. In 2020, Edwards ran the ball 144 times, accumulating 723 yds and 6 TDs on an average of 5.0 YPC. Since arriving in Baltimore, Gus Edwards has been incredibly consistent, averaging 138 cars, 717 yds, and 3 TDs. Last year Edwards stepped up and had a career-best of 6 TDs while getting 8 goal-line carries and 27 red zone touches.

Edwards just signed a two-year extension to remain with the Ravens as their backup running back. JK Dobbins is the clear-cut RB1, and quarterback Lamar Jackson might be the best overall runner on the team. However, the Ravens led the league last year in rushing attempts (555) and the percentage of rushing plays (55.9%). Meaning that we can easily see Gus Edwards continue the success he’s established as the backup RB in Baltimore. If Dobbins were to go down during the season, Gus Edwards would easily take over the workload and teeter on top 10-15 RB, if not better.

There are still quite a few people that would say it’s a 1A and 1B backfield, but make no mistake about it, Nick Chubb is “the guy.” Last year the Browns showed us they have no problem putting in Hunt when they are firmly in the driver’s seat. This shows me that the Browns will take out Chubb when they can, most likely to keep him healthy for the entire season. This gives Hunt opportunities to put up big numbers behind the best offensive line from last year. My prediction for Hunt this upcoming year is rushing yards 800-1000 yds, 200-400 receiving yards, and 10 total TDs.

This table depicts Hunt’s play with and without Nick Chubb. (stats provided by Pro Football reference)

AJ Dillon went into 2020 as the Packers 3rd string running back and still had a decent year. Dillon put up 242 yds, and 2 TDs on 46 carries last season, averaging 5.3 YPC. While that season didn’t make him a desired player last year, it showed the potential is there for Dillon to be fantasy-relevant in the future. Last year AJ Dillon was showcased in week 16 against the Titans. Dillon played fantastic in the snow, putting up 124 yds and 2 TDs on 21 carries. Putting on a display of hard-hitting, physical downhill running will make him an excellent backup this year to Aaron Jones.

Jamaal Williams’ signing with the Lions opened up 119 carries and 35 receiving targets for AJ Dillon to take on this upcoming season. That being said, Aaron Jones is still the number 1 in Green Bay and will get his 200+ touches barring injuries. Dillon should be seen as a valuable handcuff to add to your team. My prediction for Dillon is 100-130 carries, 600-700 yds, and 4 TDs.

In most fantasy football drafts, starting running backs are off the board by rounds 8 or 9. This is where handcuffs become an important addition to anyone’s fantasy squad. They allow you to backup your starter or take advantage of an injury to another team’s starter. Something to remember is most starting running backs miss at least 1-2 games a year. When that happens, you’re going to need that team’s “next man up.”

Get the Dynasty Nerds app in the Apple Store. Mock drafts for Superflex, 1QB, Standard, even SFB11. If you are a DynastyGM subscriber, it even syncs with your actual teams so that you can do rookie mock drafts with ALL of your actual picks. Also on desktop. Coming soon to Android.