Jordan Rains gives you a heads up on some dynasty fantasy football buys for IDP in 2021. 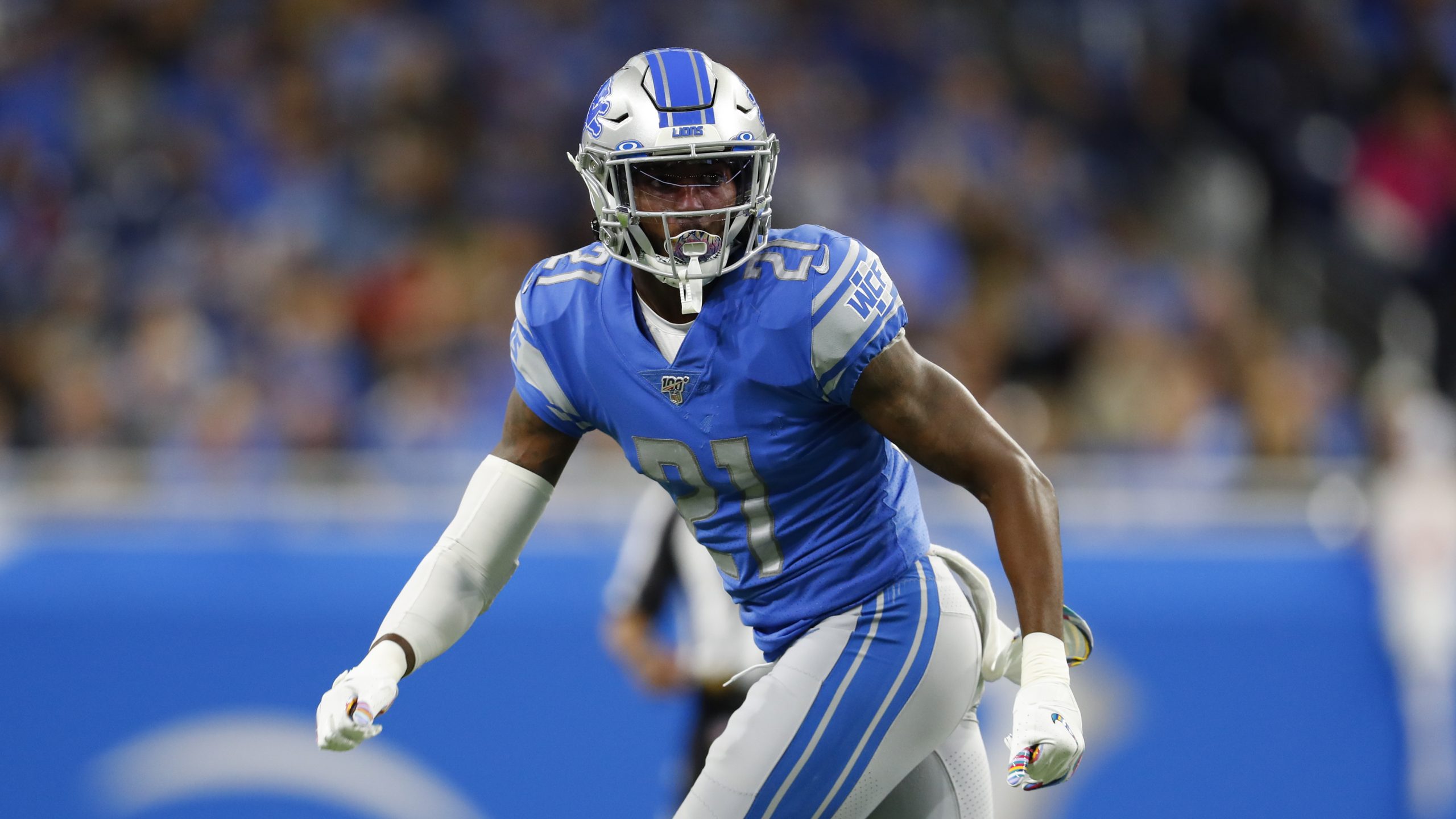 The offseason is what makes dynasty fantasy football so much fun because there isn’t one! Dynasty team management is all about continually evaluating where your team is and making adjustments as needed. Dynasty leagues are much more profound than redraft rosters, so most of these adjustments come through trade. These are my top 5 favorite early offseason buys for IDP fantasy football in 2021. As always, we will be using IDP123 Default Scoring when we refer to points.

The narrative around Tracy Walker is that he had a bad season and a shell of himself. That the player he appeared to be in 2019 when producing top 24 DB finishes on a near-weekly basis was fraudulent—a sham. I’ve seen this narrative about Walker spread from members of the IDP community. You might’ve as well. Is that the truth, though? Did he fall off a cliff like the narrative around him suggests?

Situational variables involved were involved in Walkers’ demise. We knew entering the season that Lions head coach Matt Patricia wasn’t good at his job. The personnel packages you saw on the field reflected as such. The players who were seeing playing time and poor effective coaching also highlighted Patricia’s poor coaching.

A large part of his failure was his refusal to play Walker more than he did to start the season. Often in 2020, Walker was rotated out of games. When that happened, offenses knew to attack the weak run defense. The Green Bay Packers game in week two’s a perfect example of this.

Couple this low usage rate with a nagging season-long injury, and it’s easy to feel like Walker didn’t perform in 2020 the way he did in 2019.
I’m not so sure that’s the case though, let’s take a look!

In 2019, Tracy Walker was a busy boy accumulating 103 tackles in 13 games. He started in 12 of those games while having eight passes defensed and six tackles for loss. A total of 14 impact plays combining to create 230 fantasy points. Walker accumulated those stats across 843 defensive snaps. If we do a little math, we can see his points per snap rate to understand how he really performed.

In 2020, Walker appeared in more games. He played in 15 but started only seven of them. As stated above, there were situations and variables at play with Walker that need to be considered. Walker posted 87 combined tackles, five tackles for loss, four passes defensed, and a sack. He had ten impact plays combined. Walker did have a significant play negated late in the season that would have boosted his season total a reasonable amount as well, but I digress. This time, Walker played in only 675 defensive snaps and scored 181 fantasy points.

Tracy Walker was the same player in 2020 that he became in 2019.
Oh, and if your defense is that, he only scored under double digits six times, Arizona Cardinals defensive back Budda Baker scored under doubles digits five times. By the way, Baker played in 100% of the snaps in the games he played in.

The narrative around Walker is something else entirely. It’s one of a player who didn’t perform. When he did, buy him up before they read this. Just remember you heard it here first.

Tremaine Edmunds’ narrative has finally caught up to reality. He’s a bit overrated. His value has been hyperinflated by the story of how good he is at such a young age. However, how good he may be isn’t always an indicator of IDP value. Look at Fred Warner, for instance. Warner’s numbers have never matched the hype behind him for IDP.

It’s crucial, contextually, to remember that Edmunds dealt with a slew of injuries in 2020, unlike he ever has. A shoulder injury in week one forced him to miss week two. Also worth noting that he dealt with foot and hamstring injuries all season.

Edmunds turned in a lackluster LB29 performance in 2020. He finished behind waiver wire finds like Tyrell Adams, LB for the Houston Texans, and Alex Singleton, LB for the Philadelphia Eagles. Edmunds also finished behind cheaper draft day options like the New Orleans Saints LB Demario Davis.

Injuries be damned, though, he still managed to suit up for 15 games, coming just two tackles shy (119) of his career-high in 2018. Edmunds also matched his career highs in sacks with 2. So if the tackles are intact and he’s played the full season essentially, why is the narrative so harsh? What’s changed?

Finally, that narrative seems to be catching on. As that happens, we need to look at Edmunds through a different lens. To me, he’s now a dynasty buy.

In 2018, Edmunds showed proficiency in coverage with 12 defended passes as a rookie, which is outstanding. Those numbers dipped in 2019, but Edmundsmanaged to put together a season with ten tackles for loss. A huge positive to see from a player. Both of these are premium Impact Plays. Meaning they generally occur at a higher rate than forced fumbles, sacks, etc. Edmunds has shown to historically be a player that will get you 23 impact plays between those two skillsets.

Edmunds, on a points per snap basis, was better than he was in 2019. The impact plays regressed a lot due to injury. Edmunds, the player, actually saw an uptick in production, not a decrease.

Like I mentioned at the start, he’s always been a little bit too gassed up. I’ve expressed that sentiment before. Now, as the narrative begins to change and his value falls, managers aware that he left a lot of impact plays on the field can buy an ascending asset with a depressed market value.

Easily the biggest surprise of the rookie defensive class was Kamren Curl. He finished as DB19 despite not becoming a full-time starter until Week 9. That opportunity came at Landon Collins’s expense after he suffered a season-ending Achilles injury in Week 7.

Curl posted some eye-popping plays as a rookie, including three interceptions, two sacks, and a touchdown. In total, 14 impact plays on 73% of defensive snaps, along with 88 combined tackles. He became an immediate impact player, and what Curl did to spark this defense shouldn’t be overlooked.

Even though the Washington Football Team owes Collins a lot of money, it’s hard to imagine that they don’t find a way to get Curl on the field more. Collins traditionally plays the strong safety role, so it’s not hard to see a world where Curl plays free safety next season. He played a healthy amount of snaps at FS and SS in 2020. The Washington Football Team has a young defense loaded with talent. Make sure you don’t sleep on Curl.

Coming out as rookies, I had Devin Bush ahead of Tampa Bay Buccaneers LB Devin White for fantasy purposes. Bush had five more impact plays as a rookie than White did, even though they played almost the same snaps (Bush played, while White played in 829). Bush also outpaced White in tackles posting 109 compared to Whites 91. They both flashed significant upside as rookies.

Entering their sophomore campaigns, both started slowly. Unfortunately for Bush, he never had a chance to redeem his slow start the way White did in 2020 due to an ACL tear in week six. Because of these two factors, many IDP fantasy managers view Bush with more scrutiny than he deserves.

The Steelers defense is built around a cornerstone inside linebacker, which is why they moved up to draft Bush in the 2018 NFL Draft. Then, subsequently trading for LB Avery Williamson from the New York Jets in 2020 after Bush went down.

When Bush returns in 2021, I worry about his ability to move laterally with confidence. However, as mentioned earlier, Williamson was only 1-year removed from an ACL tear himself and still managed to put up 111 tackles in just ten starts across two teams. A rare buy opportunity for rare talent.

After showing out in his final season with Clemson and then going on to blow away the combine, He got drafted as a top ten pick in the 2020 NFL Draft; expectations were sky-high. However, it wasn’t the rookie season many IDP managers anticipated for Isaiah Simmons.

In Week 1, Simmons was worked over early by the San Francisco 49ers. From there, it was a struggle to get back on the field. Fellow Cardinals’ LBs De’vondre Campbell and Jordan Hicks handled the starting roles throughout most of the season. Late in the season, though, Campbell suffered an injury, and Simmons got another chance to play. He showed that he had developed since his early outing.

Simmons finished the season with 54 combined tackles and an impressive 12 impact plays across 376 defensive snaps. He has the playmaking upside you want in an elite IDP linebacker. The snaps are coming.

The offseason is the best time to build, rebuild and tweak your dynasty team! I hope you found this write-up useful in your quest for a 2021 dynasty championship. Check out the incredible Dynasty Nerds apparel and sign up for the Dynasty GM tool if you haven’t already! And if you love video content, the Dynasty Nerds Youtube Channel is an absolute must subscribe! Follow me on Twitter, Jordan Rains, and listen to The IDP Army Podcast for more IDP fantasy football content. Cheers.