Top College Running Backs 10-6 to watch in 2019, for Devy and Dynasty leagues. 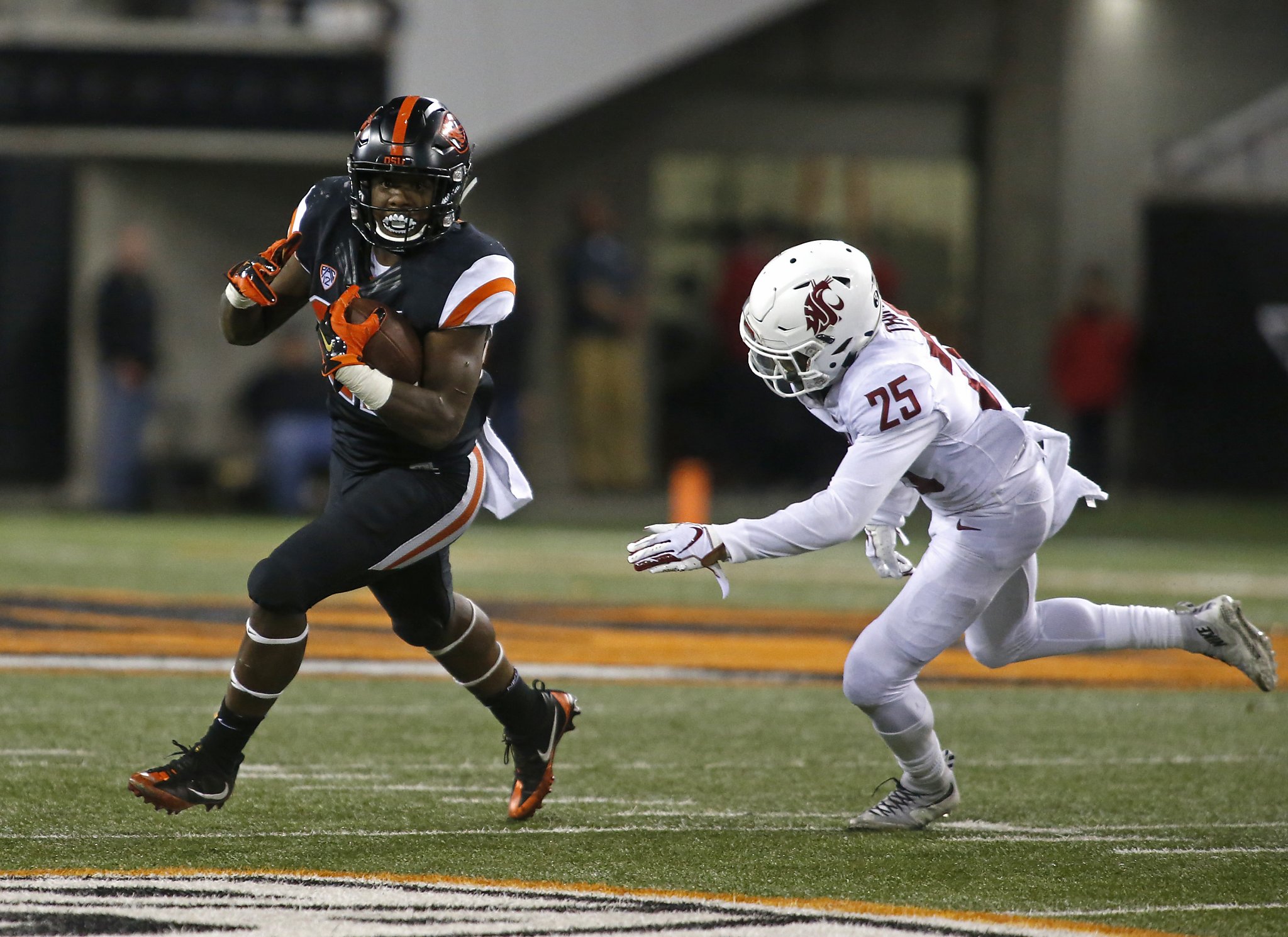 For starters, many of you may be thinking what is a Devy league? It stands for Developmental players. In a Devy league, you are drafting college players before they are eligible to enter the NFL draft. This kind of league benefits you more than you may realize. For starters, you now pay more attention to College Football. You learn about the prospects and in return, you learn more about the incoming rookie classes and its depth. Most Devy league drafts are two to three rounds, which you may think, won’t that affect the rookie draft? To an extent, it doesn’t as not all players drafted in a Devy draft are going to be coming out this year, a couple of players in this article will be players coming out in the 2021 class.

Now that I’ve given you a small breakdown of Devy leagues I would encourage you to check out Garret Price’s article to learn more about the benefits of playing in a Devy league. In this article, I will break down my top running backs from 10-6  and give you a few guys to watch out for on this list as well that just missed the cut. I would draft them in this order in a Devy league draft, and these rankings can also be applied if you are playing in a College Football fantasy league. During each break down I’ll discuss their college production while also give you my opinion on how they might translate to the NFL, so let’s start breaking down some future NFL studs.

Jermar Jefferson joined the Oregon State Beavers as a three-star prospect . He Had an amazing freshman season for the Beavers after he took over for an injured Artavis Pierce. Jefferson had 239 attempts for 1,380 yards and 12 touchdowns playing in a bad offense. Jefferson led the PAC 12 with a 44% breakaway percentage and finished 9th in the NCAA in rushing. While he will be the starter in 2019 he will have to split the backfield with Artavis Pierce and BJ Baylor, who is getting a ton of hype in camp.

Jefferson shows great contact balance and consistently breaks arm tackles to go along with his breakaway speed. Jefferson does a great job bouncing outside when all the holes are closed up. Some of my favorite runs came from him hitting the opening as defenders were collapsing in, he then cuts back or spins out and bounces the run outside. While he isn’t the most elusive back in college, he has shown some decent promise.

Jefferson so far doesn’t have many weaknesses, though we have only seen him for one year. He did catch 25 passes last year, but I would like to see that continue to grow in the receiving game. The biggest question mark I see for the 2019 season for him is the possibility of a split backfield. BJ Baylor has been getting a lot of hype and Artavis Pierce is still there. If they take carries away, it might hurt some of Jefferson’s development. On the other hand, it will help the workload on his legs.

Another clip of Jefferson showing some decent elusiveness.

Trey Sanders joined Alabama as one of two five star recruits on my list https://n.rivals.com/content/prospects/2019/trey-sanders-94031

Sanders has yet to take a snap at the college level at this point. From what I have seen of his high school tape he made quite a few huge runs, some of which looked to be stopped at the line. He showed great jump cuts and was always moving his feet. He proved to be a reliable pass catcher and was able to make defenders miss and showed the strength to break tackles.

Ultimately, Sanders looks poised to be an amazing back at the college and NFL level, but a lot has yet to be determined. He will be splitting time with at least Najee Harris and Brian Robinson Jr. so we may not see Sanders in 2019. However, I do subscribe to the notion that better talent will get playing time.

While this is a clip of him in high school, his ability to make multiple defenders miss and then breakaway for a touchdown shows why he is a five star prospect.

Trey Sermon came to Oklahoma as a four-star prospect https://n.rivals.com/content/prospects/2017/trey-sermon-2697

Sermon spent most of his 2017 season in a timeshare with Rodney Anderson who was a phenomenal prospect in his own right. While it looked to be the same story in 2018, Anderson suffered a bad knee injury that led to Sermon becoming the starter. In 2019 Sermon will likely be the lead back, but he will be splitting time with Kennedy Brooks, who is another interesting prospect in the OU backfield.

Sermon is one of the best backs in this class. He runs with great power and is quite elusive as well, forcing 60 missed tackles last year. He shows good short-area burst and has shown good hands in the receiving game with 28 catches in two years. Playing in an up-tempo high powered offense has helped him, and he is expected to continue improving.

Sermon had one of the best offensive lines in college football the past two seasons and many will question if that was the basis for his success.  In both 2017 and 2018, he was playing with the Heisman trophy winning quarterback as well. 2019 brings losses on the offensive line and a quarterback change to a guy much different skill set than Sermon has had the past two seasons. This could lead to a very good opportunity for Sermon as they will likely rely on him more than ever. However, if he fails to deliver on the promise waiting for him this season he could see his stock drop in a loaded running back class.

For starters, his quick cuts are outstanding. Add in a nice stiff arm, great vision and ability to get it outside and score makes him an intriguing prospect.

Just breathe in this clip as Sermon does it all. Nice and easy catch. he immediately cuts up field. His quick cuts, easy movements, and speed leads him to almost an amazing touchdown.

Najee Harris joined the Alabama Crimson Tide as the other five star prospect on this list https://n.rivals.com/content/prospects/2017/najee-harris-131

Harris has been behind a litany of talented backs in the past few years at Alabama; being stuck behind guys like Josh Jacobs and Damien Harris, both of which left for the NFL draft last year. Harris still put up decent numbers in 2018 with 117 attempts for 783 yards and four touchdowns. However, besides conceding some work to freshman Trey Sanders, he will likely be the lead back and should boost his stock a ton in the 2019 season.

Najee Harris is a guy I could see quickly moving up my board throughout this season. For starters, he is built like a wide receiver but plays running back. While he hasn’t been able to show much as a receiver in college he looked good with his limited receptions. His size/power combination is scary, then you add in his contact balance and vision and you have a potential NFL star. Harris could be one of the most complete backs in the class. Has shown good elusiveness for his size and once he makes the first guy miss, he’ll eat up a ton of yards. He shows good short-area burst as well.

Harris only has one key question for me, his receiving ability. In high school, he only had 25 receptions, and so far in college only has 10. I need to see more out of him in the receiving game. He does also lack some long speed, while he is not slow and is hard to bring down from behind he can be caught.

I love Harris athleticism in this clip. While he doesn’t get a ton of air time for a guy that big to make that jump is awesome. The ability to get his balance and then take on two defenders shows his strength.

This is one of my favorite runs by Harris. He shows the patience to wait for the hole to develop and quickly cut up through the hole. He lowers his pads to the point of contact and keeps his balance enough to reach for the goal-line and score a touchdown.

Kylin Hill may be one of the most underrated running backs in the SEC. He gave up a ton of work to Aeris Williams in 2017, which caused him to get just 78 attempts. However, due to his skill set, he out-snapped Williams in 2018. Hill had 117 attempts to Williams 85. Hill now moves into 2019 as the unquestioned starter and in my opinion, is in for a tremendous season.

Hill has fantastic short-area burst in his game. While he isn’t the most elusive back in this class he can make a guy miss here and there. Hill is not afraid to run into a hole, drop his shoulder and level a defender. He also has no issues dragging defenders with him fighting for those extra yards. I like how quick his feet are and his ability to change direction, he also shows a great aptitude for the receiving game, which could be the best part of his game.

Hill doesn’t have elite speed, which likely will eliminate his ability to get the long touchdown runs. I’d like to see him become a little bit more elusive as well. While it may not be a huge issue, I would like to see how he handles getting possibly 200 carries in 2019. He has yet to rush for 1,000 yards and has yet to have 200 carries combined in two years, currently sitting at 195. While I believe he can and will hold up with a full workload, I would like to see it before he gets to the NFL. All that being said, he is one of the better backs in the SEC and should be in for a huge 2019.

Kylin shows off his receiving skills in this one. He runs a nice route makes a nice easy catch in motion. Turns a tries to lower his pads, takes the hit and score a touchdown.

I love this run by Hill. He has a huge area to run into and uses his short area burst to eat up yards. Makes a nice cut and a beautiful stiff arm to get past the first defender. He then turns on the jets and beats two defenders to the endzone.

Those are my current Devy prospects 10-6 for the 2019 season. I’m very high on these guys for the College game for the coming season and the NFL when they enter the draft. I will list three guys below who came very close to my top 10 and all have a very good chance of making it in there throughout the season.

I truly hope you enjoyed my breakdowns of my 10-6 College/Devy running backs. If you would like to see how the rest of the running backs are ranked by our great rankers including myself on the Devy ranks. Check back soon and see who made my top five Devy running backs. Feel free to hit me up with any dynasty or devy questions on twitter anytime and you can also follow me @SportsfanaticMB and check out my podcast The Fantasy Football Roundtable on the Full Time Fantasy podcast network.