While the snap count indicates Elijah Mitchell is a permanent fixture in the San Francisco backfield, can we be absolutely confident in that moving forward? How is his skillset translating to the NFL? Get with @FFB_Vern to find out! 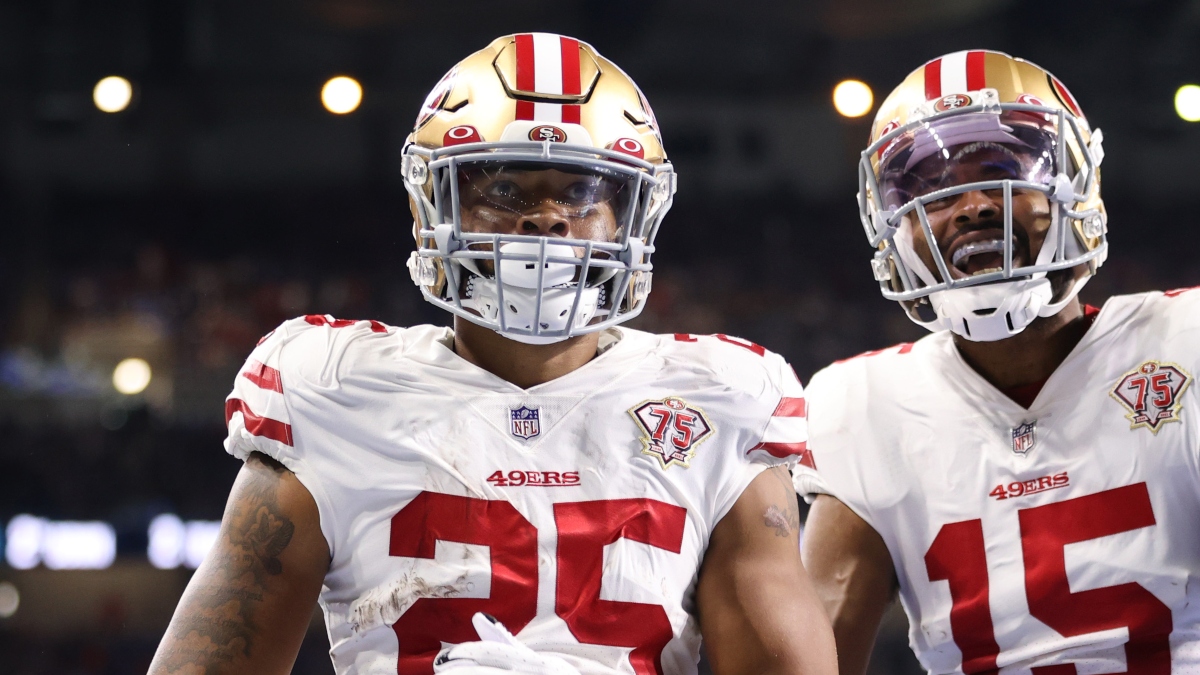 In the last few weeks, Elijah Mitchell has made appearances in the ‘Good’ portion of @WooLee_FFB‘s weekly “Dynasty Rookie Good and the Bad” posts. Unfortunately, week 9’s game script kept him from maintaining that trend. Be that as it may, Mitchell’s emergence in the NFL is evident. Mitchell has had 3 100+ yard performances, each with a score. He has missed a few games to injury, and there are other bodies that could threaten his opportunity. Does the film confirm or refute his hold on the 49ers RB1 position?

What is Translating from College?

This series has tried to track the translation of those qualities displayed in college to the NFL. As for Mitchell, he popped in the Running Back Vision model as an Outside Zone runner. Given San Francisco’s propensity to build their run game on the foundation of Outside Zone, Mitchell’s selection in the sixth round of the 2021 draft must have been a no-brainer.

Some of the qualities he showed in college were the following:

Which of these is translating and contributing to his rookie success? Where does he still need to develop?

Many rookie running back’s lack patience. Part of it is the speed of the game hurries them to make decisions, but other times it’s some level of ego. Mitchell consistently shows an understanding of his physical ability. He knows he isn’t the fastest or quickest on the field, but he will consistently use what he has to the best of his ability.

On this 27-yard gallop in Week 8, we can see Mitchell’s patience and trust in his line. At the pause, it appears there is no real gap to run despite the leverage his offensive linemen have. Upon recognition of the situation, we see him throttle down without completely transitioning to a ‘foot-fire.’ This allows him to match pace with the developing gap and show good burst through the gap. Once he is in the open field, the jump cut toward the back of Brandon Aiyuk seems curious at first glance. Upon a closer examination, we can see he manipulates the defender to assist Aiyuk’s block. This is excellent mental processing.

Earlier in the same game, we can see good decision-making in the face of adversity. This Power run looked like it was blown up early, but this is where Mitchell’s self-awareness pays off. The pulling guard is tasked with displacing Roquan Smith at the point of attack. Smith shows off his skills by quickly shedding the guard. Watching Mitchell closely reveals his recognition that the play is blown up, but he makes a smart decision. Instead of trying to do something ridiculously athletic with a goal of bouncing outside, his subtle adjustment toward the intended leverage and lowering his pads affords him space to work. This split-second decision is the difference between zero yards and seven yards. Decisions like this are the ones that keep offenses “ahead of the sticks.” This showed evidence of his contact balance and play strength as well.

One should examine four qualities when a running back finishes a run: home run speed, balance, elusiveness, and ball security. Mitchell’s college tape created some concerns for me in the ball security department, but he must have cleaned them up over the off-season. If he hadn’t, he would likely be in the dog house. Shanahan is almost as unforgiving as Belichick in this regard.

Home run speed is a mega ‘X’ factor when it is at the ‘very good’ or ‘elite’ level, but that is not in Mitchell’s toolbox. We saw some level of elusiveness in the first play, but this isn’t Mitchell’s most impressive finishing feat. His contact balance is high level, however. This is a part of his college game that has translated. With his 5′ 11”, 221lb frame, staying on your feet to utilize that low center of gravity is a plus. This is something that we should have confidence in going forward.

When scouting players, it is important to focus on what they CAN do. It is ridiculously easy to bury a player if you briefly watch enough plays with subpar outcomes. With that said, you still want to identify the gap between a player’s skillset today and an elite skill set. Once that is identified, it is valuable to assess how difficult it will be to overcome the gap or mitigate the negative impacts of the weakness. Therefore, these following areas are simple concerns that we want to track how they evolve throughout the player’s career.

“Wait a minute? I thought his vision was a plus?” It is totally understandable to ask this question. Vision, as a concept, is complex with many layers. While we typically boil it down to a one or two-word subjective assessment, this type of assessment typically leads to more questions.

In Mitchell’s case, I would say he has good vision. A natural question you should have is, “What is it about his vision that is not ‘elite’?” My answer to the question is that he lacks big-picture vision. This concept was explained in this episode of “Big Play Anatomy,” where we discuss Nick Chubb’s elite vision. Chubb has the ability to infer what the field looks like outside of his peripheral vision. A step down from ‘elite’ would be ‘very good’ vision. This is where a runner can consistently set up/prepare for a second-level defender while attacking the first-level hole. We see this occasionally from Mitchell, but he needs more consistency to get the grade.

Hopefully, the above explanation helps you understand how I see his vision right now. This play may help you visualize the issue I am seeing. On this Outside Zone play, Mitchell seems to neglect a gaping cutback lane. There are two things to look at during the pause. First, we can see the leverage of the center, who climbs to the linebacker, and the left guard who successfully reach blocks his assignment. The second thing to notice is the neutral leverage that the right guard gets (highlighted in yellow). This may have made Mitchell hesitant to bend to the gaping cutback lane. He ends up trying to cut back after moving five steps closer to his eventual tackler in Zach Allen.

Maybe the center loses leverage if he makes this cutback when highlighted, but he would have had more positive yards before contact. Even then, his contact balance may have afforded him an even larger gain. Mitchell either has tunnel vision, or he lacks the ability to see the field. This will cap his vision grade for me despite the positives mentioned above.

Elijah Mitchell has good enough burst to get to his top speed quickly. Unfortunately, there is no third gear. There have been several big plays, including the 27-yard gallop above, where a defensive lineman is making the tackle downfield. Sure it’s a credit to the defensive linemen (they get paid too), but it’s a trend that caps his upside. This is not exactly fixable either. As they say, “you can’t teach speed.”

Elijah Mitchell will not stay in the rotation of “Tracking Translation” because all the positives to his college game are coming through on his pro tape. We should continue to see Mitchell own the backfield in San Francisco. At least that is until Trey Sermon comes along. It is very unclear what is going on with Sermon. Many, including myself, thought he would be the future of the 49ers backfield when drafted. Shanahan has been a bit of an enigma when it comes to using the talent on his team. We saw it with Brandon Aiyuk early this season, and it seems that Sermon is in the same doghouse.

This Sermon saga is something to keep an eye on moving forward. The way injuries have plagued the 49ers historically, he could get his opportunity to shine soon. There was mention of a ‘hot hand’ approach and ‘no regression by Sermon’ from the coaching staff per this article. Running Back Vision indicates Sermon’s Advanced Success Rate is better in every category that matters to San Francisco’s running scheme. With that said, when he saw significant action, it was against the run-funnel Packers, and the middling Seahawks run defense. Meanwhile, Mitchell’s three 100-yard performances came against Detroit, Indianapolis, and Chicago.

Context matters, and there is a lot that we don’t know behind the scenes. If we trust the coach-speak, it could just be a matter of time before Sermon comes on the scene. The actions of the coaching staff indicate Mitchell is here to stay. It is prudent to acquire Sermon right now, especially if you have Mitchell. Sermon has the skillset to ‘steal the show’ if injury provides an opportunity. So if you are invested in Mitchell, draft capital dictates Sermon is an excellent and inexpensive insurance policy. Ride the high of Mitchell while you can, but be ready for the volatility.