Devonta Smith and Ja’Marr Chase had great showings in their NFL debuts, but did they give us the answers we need? Can we have confidence in consistent production moving forward? @FFB_Vern digs into the tape. 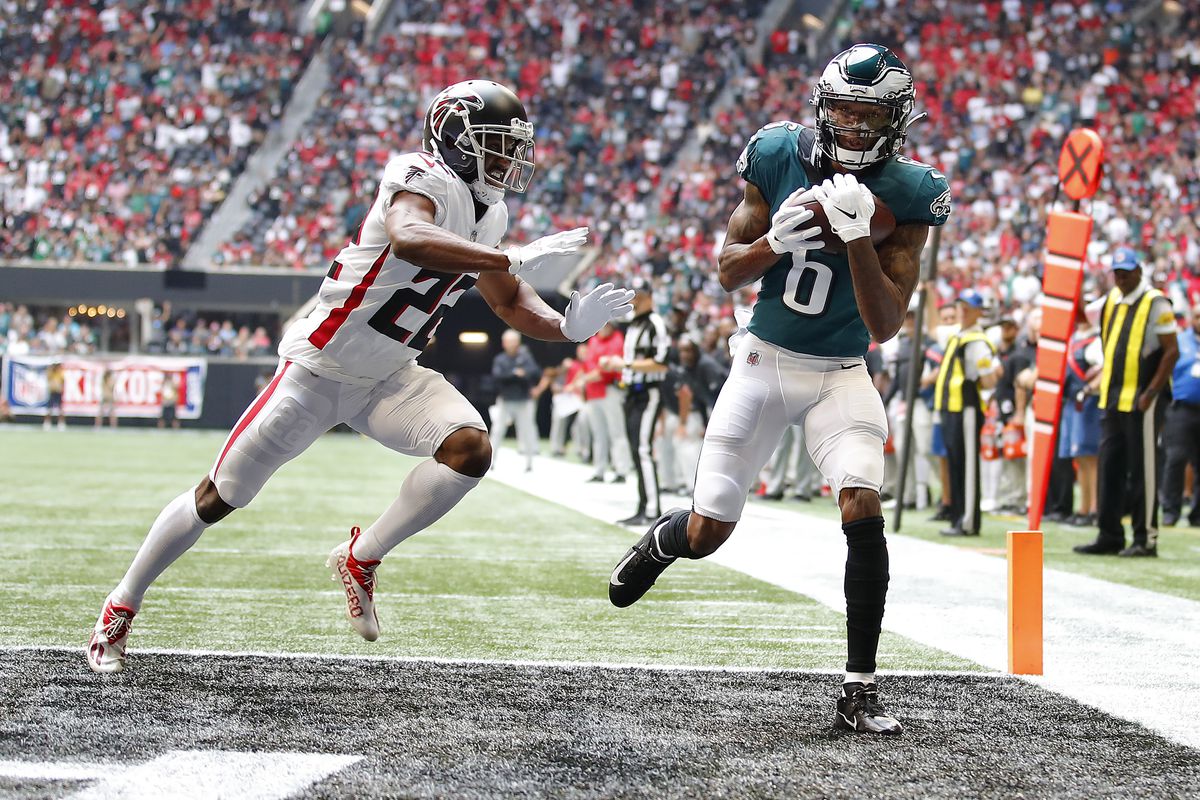 Wow! Is it just me or does week one always seem wild? Week one was packed with extremely awesome NFL action, and we are seeing positive signs from some of our rookies already. Devonta Smith and Ja’Marr Chase answered some of the questions from the primer article on this series. Let’s dig into their performances.

As an Eagles fan, Smith’s immediate impact was extremely encouraging. Smith had 6 receptions on 8 targets for 71 yards and a score in his debut. It’s really easy to get caught up in the stat line, but that would be irresponsible. Let’s first remind ourselves of the questions that need answers, then cross-reference with the tape.

Let’s start with the touchdown that was all over #PHIvsATL on Sunday. As we can see, this was a legal pick play designed to take this very shot. Zach Ertz had a perfect execution of his route to set up the pick and DeVonta Smith perfectly slow played his release. This is a demonstration of his IQ and comfort with the game speed. Many rookies would rush this release, rendering Ertz execution ineffective. Once the Slim Reaper wins this route it’s just a matter of tracking the ball over the shoulder, looking it in, and ensuring his feet are in bounds.

What does football IQ (or mental processing) have to do with answering either of the questions? High level mental processing helps him avoid situations where his lower BMI could become problematic. Also, we know the game speed adjustment is a challenge in these transitions, but his mental processing is helping him acclimate quickly.

We received some answers in this area, but there just isn’t enough of a sample size to evaluate his translation in the release. He faced press coverage a few times, but corners seldom attempted to jam him. We will have to get a few more weeks of tape to really assess this. We will revisit the Slim Reaper in a few weeks after facing the 49ers, Cowboys, and Chiefs.

I have to admit, I broke the unwritten rule that we should not buy too much into what we see in preseason. Those drops caused me to overreact and actually consider it as a question that needed answering in Week 1. Boy did Chase clap back at all the doubters, including me, to the tune of 5 receptions for 101 yards and a score. He also earned 7 targets, which is a positive indicator. “An indicator of what?” you may be asking, and that is a great question. High target volume is an indicator of:

What Does the Tape Show?

Keep in mind this isn’t necessarily an indicator that all these things are happening. For example, he could be getting separation due to bad defensive back play. The same could be the case for effective route running, but this is why we watch the tape, right? It will help us with the context of the target volume, allowing us to better predict consistency. Let’s get to the tape to see what context and answers it can provide. Here are the questions we want to answer:

Again, I was dead wrong in worrying so much about the drops. Therefore, I believe we are able to say that was answered in Week 1. Let’s see if Chase has earned an earlier than expected exit from this rotation.

Minnesota played a lot of off coverage, but we did get to see Chase in some reps versus press. Chase had a lot of success against Breeland whether the coverage was press, soft, or off. When he faced Patrick Peterson, the success waned. To sell vertical against Peterson requires a more convincing sales job. While Chase gets off the line with a lot of speed, this is not enough by itself to sell vertical. We’ll keep an eye on this in the coming weeks against the Bears and Steelers.

Selling vertical is critical toward the top of a receiver’s stem. Chase projects his breaks a little with slight raising out of his pad level and more of a sitting back posture. We want to see that chin-to-knee technique and the violent hip drop in those hard cuts. This probably bothers me more than others, but I really believe this small nitpicky detail is the difference between good and very good. Corners on Peterson’s level will read this and make a break on the play. Breeland didn’t seem to pick up on this detail. This is a technique thing that I am sure Chase will improve as the season goes on. This isn’t an issue with his slant routes though; virtually no projection there.

Similar to what we showed with DeVonta Smith, Chase is demonstrating some aspects of mental processing to generate separation. Here, he clearly takes advantage of the corner’s zone technique by attacking the blind spot. It seems he adds some acceleration into the “Go” route right as he enters that blind spot. Waiting to turn on the “burners” tells the corner Chase is moving slower as he exits his peripheral vision. Since the corner’s zone technique puts his eyes on the QB, when he sees the throw, it’s too late. Great nuance and work here by Chase.

The jury is still out on how this aspect of his game will translate. It’s a matter of sample size and the season just started. As this becomes clearer, this will be updated.

Looking at the stat line, some might be concerned about Najee’s outlook for 2021.This is a fair posture after his first NFL game against the Bills. On 16 carries, Najee was only able to get 45 yards, and he was only able to hall in one of three targets. Just a reminder of what we wanted to answer before looking at the game:

The tape gives us only a little bit of information. We have confirmed that he will be dealing with messy trenches all season. Last season the Bills were 16th in rushing yards allowed and 20th in fantasy points yielded to running backs. The Steeler’s offensive line play made Buffalo look like the stingiest run defense in the NFL! They were constantly re-establishing the line of scrimmage which makes it a tough day for any running back. When a runner ceases to trust his blocking, it’s a challenging problem. This can metastasize into a lack of trust in one’s own eyes if it persists. The last thing we need is Harris to second guess his decisions and slow his game speed.

Najee did have two nice runs, one of which was a really nice run off a cutback in the trenches. This is what he can do if he gets halfway decent blocking.

On his other nice run, we can see the kind of backfield penetration he had to overcome all day. Both edge defenders are in the backfield before Najee even gets the ball. It is fortunate that the play design was to ‘part the seas’. Thank goodness that Najee’s burst and power were demonstrated on this play. Falling forward on these runs speaks to his finishing ability.

While it was nice to see flashes, this is not an ideal scenario for his outlook this year. We will have to monitor how the Steelers’ line play improves in the next few weeks. Another outing like this could very well open the buy low window on Harris. Of course, veteran dynasty GMs normally have patience to wait these things out. The challenge is if they were depending on Harris’ production to compete or not.

The stat line is somewhat encouraging and somewhat disappointing. Eight targets are exciting, and maybe the tape provides some useful context. Four receptions on those eight targets are concerning and warrants some investigation. A slightly greater concern is a 68% snap share. While this was more than Hayden Hurst got (60%), we have to wonder how that dynamic will impact Pitts moving forward. Concerns and excitement are both present, but can the week one tape help us codify our perception? Our focal points for Pitts were:

The targets indicate his primary use as a ‘move’ tight end and his route running is working to a degree. The tape confirms this. Per Chris Towers, Pitts lined up in the slot of split out on about 74% of his snaps. We now have some assurance about the Falcons’ implementation of their vision for Pitts.

As far as his route running, this play shows just how dominant he could be in the middle of the field. This is a simple pattern that doesn’t require a whole lot of nuance against Cover 3. I fully expect Pitts to maximize his capabilities on seam routes vs this coverage. Additionally, we see him utilize his size and body position much like he did in college.

Speaking of the body, Pitts was able to show off his catch radius with a hint to his body control. Watch how he extends on this out route. While you watch, just compare his size to the defenders making the tackle. We knew he would be a physical mismatch but seeing it on NFL tape just makes me gleeful.

Pitts was called upon to block in this game as the Philadelphia defense was able to pin its ears back. This particular snap was not the prettiest block, but it was effective. Pitts is tasked with blocking Derek Barnett, which is no easy feat. The fact that he was able to ensure Barnett could not impact the play is a good sign. Also, the secondary effort to sustain the block is encouraging. We still need to see more, and I anticipate he will do more of this as early as next week.

One thing is for sure; the Falcons pass blocking is suspect at best when trailing by a two or more possessions. Good defensive lines will be able to pin their ears back, shortening Matt Ryan’s time to throw. This ultimately means the quality of the passes will be lower in these situations. This could be an opportunity for Pitts to work the short/intermediate game. Unfortunately, we would be dependent on the coaching staff to do something that makes sense