Tracking Translation – Week 2: Should Pitts Just Be a Wide Receiver?

We are gaining some clarity on skill sets translating, but have we gained any certainty through week 2? Grind the tape with @FFB_Vern to find out. 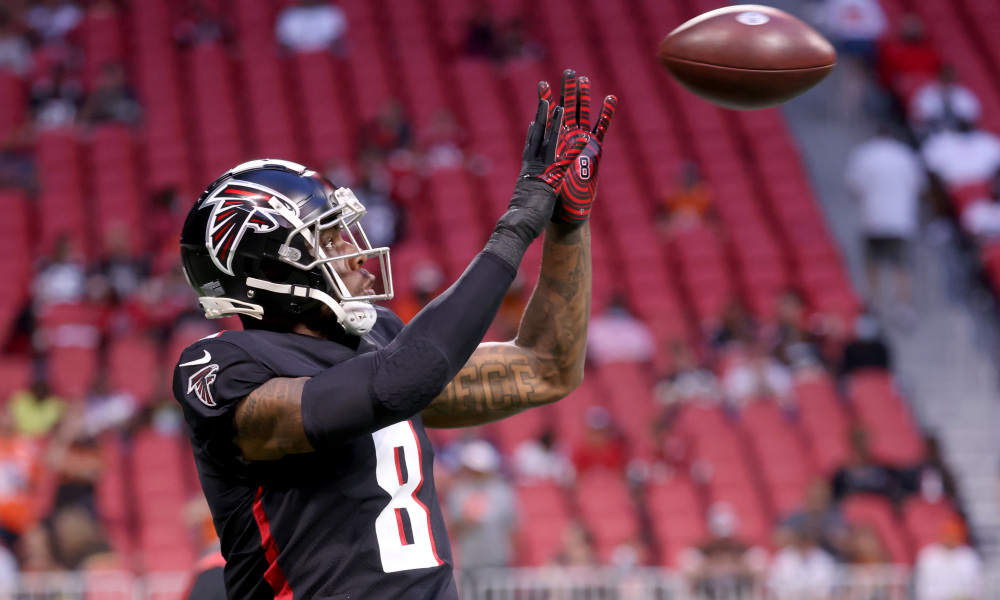 Watching 2021 rookie progress has been a treat so far. In watching their tape, it is becoming clearer why they were selected so high. Pitts and Harris will be the focus, but we’ll also touch on some observations on our wide receivers.

Much in the same way as Kelce, Kittle, and Waller, Kyle Pitts should be considered a wide receiver. We know this designation will never change, and those who roster Pitts are blessed! Pitts had an excellent game in week two with five receptions on six targets. He turned those into 73 yards (14.6 yards per catch), and a couple of those were nice chunk plays of 24 yards each. He is showing the NFL that he must be accounted for as a receiver. If only we could see an uptick in red-zone targets.

This play is a microcosm of what he has shown us thus far. First, we see an excellent release to get the defender to open to the sideline. Then we see explosiveness as he breaks this slant to the middle. Pitts adds some flair in showing off his body control. When catching this ball thrown behind him, he demonstrates his hip/torso flexibility. As a cherry on top, he re-stabilizes and explodes upfield for 18 yards after the catch. He did this routinely in college, and we can safely say he will function at a high level when detached from the formation.

The Falcons had him either split out or in the slot over 60% of passing plays in week two. This solidifies our confirmation of him as a ‘move’ tight end. He will continue to deliver as he did in the play above. Let’s look at the other aspect of his game: blocking.

We saw a little bit of his ability to block last week against Derek Barnett on a running play. This week we got the pleasure of seeing him in a pass-blocking situation.

Context is vital for every play, but facing Jason Pierre-Paul on the edge is especially important to highlight the task’s difficulty. Before watching the play below, I want you to think about something. Just because pass-blocking may be referred to as an ‘art,’ it doesn’t mean that ‘effective’ always equals ‘pretty.’

Many times in the past, I have seen experienced blocking tight ends from college get destroyed in their rookie seasons. Kyle Pitts wasn’t asked to block often in Florida, so I would expect him to lose this rep. On the contrary, Pitts shows solid blocking technique. He gets his hands inside and fights to keep them there through JPP’s adjustments. He then attempts to anchor using his insteps and engaging his glutes. This allows him to generate power even though only one foot is in contact with the ground.

This play highlights the intangible that every blocker needs: competitive toughness. Pitts could have very well fallen over, and no one would have blamed him given the situation. Seeing the competitive toughness in these infrequent challenges gives us confidence. It is a contributing factor to everything else he does well.

Given what we have seen these first two weeks, I am glad to drop Kyle Pitts from the ‘Tracking Translation’ rotation. He has more than shown his college skill set is translating to the NFL. There is not a situation that I could see obstructing his ascension in the Pros.

Najee Harris continues to answer questions about power and tackle-breaking with highlights. If you didn’t happen to see it already, then see below. Harris catches a pass on an arrow route then turns upfield to be met by Jonathan Abram. Little did Abram know he was going for a ride courtesy of Harris’ left arm! I will ask no further questions about his tackle-breaking ability. I hear you, Mr. Harris!

The vision-decision-action speed is the only outstanding question. Week 2 confirmed that the anticipated run-blocking problems of the Steelers’ offensive line are accurate. After week 1, I thought that maybe Buffalo had just stepped up their run defense. However, the O-line performance in Week 2 rubbed our faces in reality. These trenches will be messy for a while.

Given all that he is working against, it seems his anticipation of second-level blocking developments hasn’t suffered. Looking at this play below, we can see him first avoid the deep penetration into the backfield. Harris shows some anticipation of blocking at the next level as Pat Freiermuth wades through the trash to find Perryman. Harris utilizes space well nearly trading paint with Freiermuth to get into the second level. All those who roster Harris wish we could see more of this.

Unfortunately, there is still a question of his 1st-level decision-making speed when it’s not so clear. Take this play for example (2 1 1303), and there is literally no where to go. The failed reach block by Green prevents Harris from following the left guard as designed. Nassib sets the edge, and Perryman fills the cutback lane. There is nothing Harris can do.

On this play, however, I still question his decisiveness. As you can see here, the center and left guard gain very little ground on the defensive tackle. The left guard can climb to the box safety while the defensive end is blocked past Najee Harris. This opens up a clear lane to the left side where there was plenty of green grass. Had Najee anticipated the climb of the left guard, he would be able to explode into the open field. Instead, we see a hesitation that ends this play early.

Eventually, we will need to see him be more decisive in these messy trenches. What better way to do that than being constantly exposed to them, right? In the meantime, if your offensive line can’t run block consistently, then we should remove them from the equation. The Steelers realized this, and Harris benefitted from it in a big way in Week 2. He caught all five of his targets for 43 yards and a touchdown. From a PPR standpoint, we love this because the offensive line won’t improve over night. We can expect this type of passing game involvement moving forward.

GMs who roster Harris will be rewarded with their patience for his rushing production. In the meantime, they will benefit from his passing work. If you can, I would continue trying to acquire Harris now if you are in a competitive window. While we are waiting on his decisiveness at the first level to pick up, the production for 2021 will be insulated. In 2022, Harris is sure to be in that top tier of RBs especially when, not if, Pittsburgh invests in their offensive line.

Now let’s check in on our receivers. Statistics don’t really do justice to what Ja’Marr Chase put on the field. On four targets, he produced two receptions, 54 yards, and a score. Thirteen PPR points of production is desirable as his floor over his career. With that said, the film study will show a lot of positive things about his translation.

One of his unsuccessful targets was an overthrow by Burrow, but he totally sold vertical on the break. However, he still occasionally projects the break by sitting back. Consistency here is improving, so give it time. His other missed connection was a drop on a slant. This is totally on him, and there is no excuse.

One thing you should ensure you see for yourself is his release. In this game, I believe he proved why jamming him is a mistake. Chase demonstrated excellent use of hands, play strength, and explosiveness into his stem. I am comfortable saying this part of his game has translated. The release will continue to be a money maker for him.

The Slim Reaper had a down day, but there are some contributing factors. First, he was underthrown thrice, and those should have become 115 yards and a score. On all of these, he is consistently using his route running to get behind the defense, much in the way we expected. Outside of the overthrows, he is still getting open against zone consistently; Hurts needs to see him.

Revisiting the most concerning issue: his BMI. This issue raised its ugly head a few times, but watching it closely, it will only be an issue for his fantasy production. Here is what I mean. On two plays where he didn’t have the play strength to fight off Josh Norman, he could draw a pass interference penalty. This is the case where he can move the chains, though it doesn’t help our fantasy bottom line.

The other time his smaller stature came into play, he was crowded to the sideline. This seemed to be a running theme for many Eagles receivers, but Smith has the tools to deal. On this particular rep (above), the tape showed he didn’t commit his hips, head, and shoulders on the release. He did plant his stab step outside of Lenoir’s frame, however. We have seen him sell a direction well in the past so no need for panic here. Let’s check back in a few weeks.

The season moves fast so keep tuning into this series. Next week we will replace Kyle Pitts in the rotation with another rookie. We should have some final takeaways to rotate a few other players out as well.